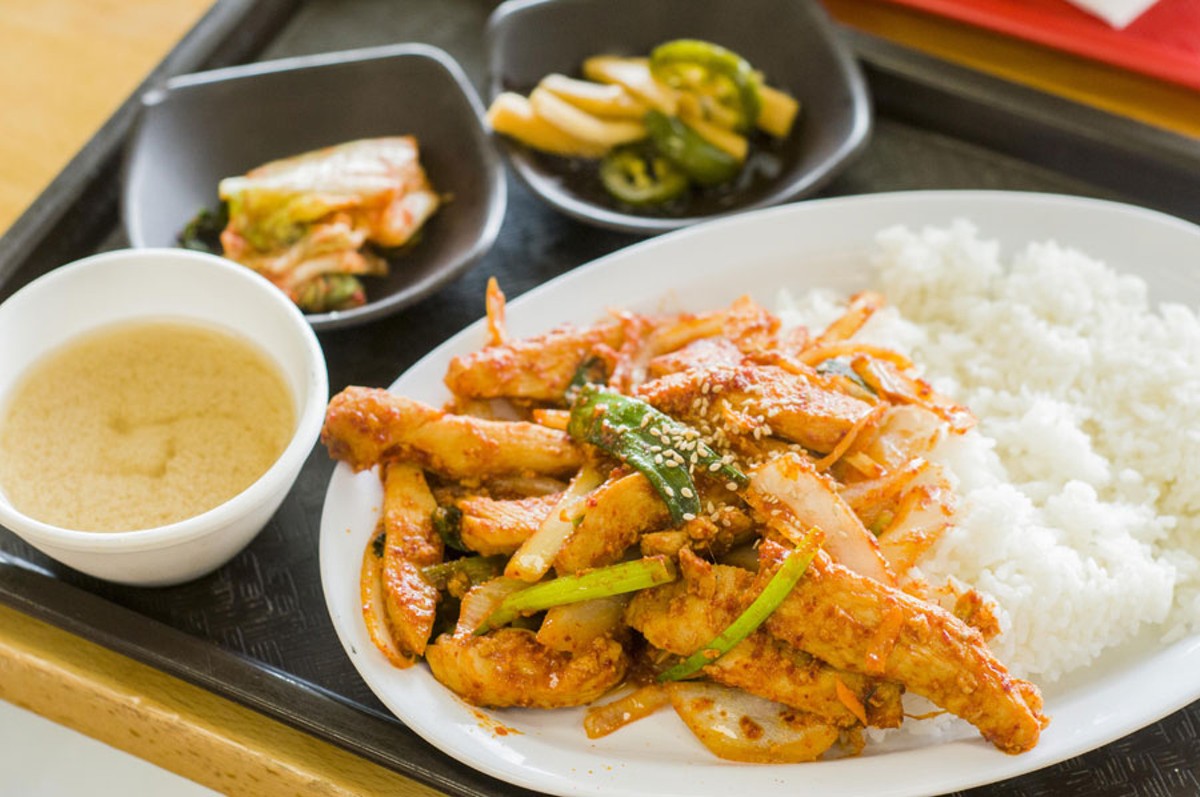 Troy is no Madison Heights or Dearborn quite yet, but it's quickly becoming one of southeast Michigan's most diverse food destinations. One exhibit is the cluster of Korean and other southeast Asian restaurants in the Dequindre corridor north of 14 Mile Road — Korea House, Tomo, Dae Jang Keum, and the mighty Trizest. There's also the excellent Korean cafeteria in the H-Mart Korean grocery store at Big Beaver and Dequindre, which sits right next door to Tomo and Dae Jang Keum.

It's by far the most informal of the aforementioned group, and there's not a lot of formality there to begin with, though that's part of H-Mart's appeal. It sits in the store's front corner, a small collection of semi-communal tables and a stainless steel counter where one places and retrieves orders.

H-Mart's cafeteria fills up at lunch with lots of businessmen, moms with kids, elderly ladies, and others who either visit specifically for the lunch counter, or for a break while shopping. It's easy to underestimate a cafeteria (especially if you worked as a teen at a K-Mart cafeteria, as did some restaurant critics), but that would be a mistake — some of H-Mart's dishes will incite moans of pleasure.

The spot to start is the chicken dupbab, a sweet and spicy mix of chicken and green onions soaked in a hot pepper paste with sesame oil, soy sauce, black pepper, sesame seeds, and sugar. The jeyuk dupbab is the same, but with pork butt.

Also excellent is the bulgogi, though H-Mart's is sweeter than what you might find coming out of your neighbors' kitchens. Bulgogi typically holds slices of tender ribeye marinated in some combination of soy sauce, rice wine, sugar, sesame oil, garlic, and other elements — perhaps H-Mart uses more rice wine or sugar? It's served in a flavorful, mixed mound of clear dangmyeon — or "glass noodles" — green and white onion, carrots, mushrooms, and a bit of sesame seed.

Ramyon (ramen) is a yellow bowl, cloudy with miso and heavy on the egg, that's accented by green and white onion, and filled with wavy, yellow egg noodles. Those stick to the slightly salty, rich, kotteri miso-based broth that's good for the cold weather. Ramen in Korea is more like instant ramen than the more popular Japanese style, which is typically fresh. H-Mart's uguli kalbitang is a dense soup bowl packed with flaps of beef, sprigs of green onion, white onion, soft and slightly chewy wood ear mushrooms, and thin, clear dangmyeon noodles. The clear broth is flavored with garlic and a hot chili oil — perhaps not enough of the latter, but some might appreciate that.

On the side, the crispy, thick shell of the fried dumplings is excellent, but the filling doesn't pack a punch. A better bet is the fried chicken wings, which are thick-cragged and doused with a hot pepper sauce that's far more flavorful than it is hot.

The bibimbab is standard issue, though it wasn't bad — it just didn't stand out among so many other bright and deeply flavorful dishes. The smelt roe bibimbab was solid, though you won't miss the smelt in that roe.

The drink selection is short — water and tea, but there's an entire grocery store full of interesting drinks to grab on your way out.