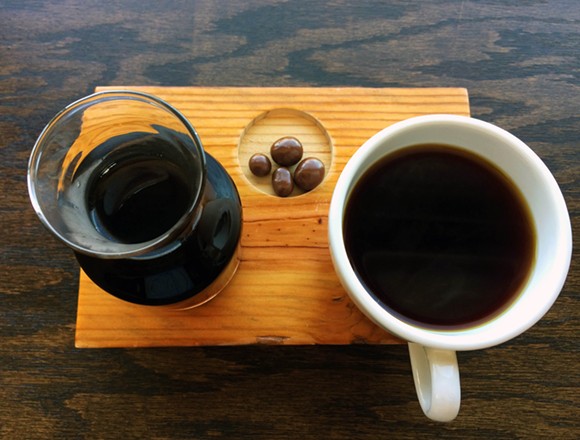 Photo by Tom Perkins
The Eleos pour over.


When people move to Detroit in 2017 to open a business and be a part of the city’s turnaround, there’s specific territory that they typically target – Downtown, Midtown, Corktown, Eastern Market, or maybe even Livernois north of McNichols.

But when Eleos Coffee Detroit managers Jacob and Nicole Cumberford, and Sean and Joni Adams, arrived here to open a coffee shop last year, they determined that they would check out an area not benefiting much from the downtown's boom. Thus, they landed in the Dexter-Davison neighborhood, one of Detroit’s poorest zip codes that also holds one of its highest crime rates.

The 20-somethings from Kansas City and St. Louis also chose the neighborhood because they say it's a part of town that's getting left behind spiritually, as well as economically. They're more concerned with people than property values, and seek to help others rebuild through God. As part of that component, Eleos hosts a daily Bible study everyday between 10 a.m. and 11:30 a.m., at which time the shop offers free coffee and pastries.

And although Eleos is here with the intention of advancing God’s kingdom, one won’t order a cup of coffee and also receive an unsolicited sermon. Eleos is a straightforward coffee shop with good pour overs, lattes, cappuccinos, and light fare, like pastries and wraps. It’s a laid back atmosphere that'll provide a caffeine bop along with a spiritual pick me up, if that’s what one seeks.

It should also be noted that the Eleos approach seems generally to be more sensitive than that of certain others who arrive in the city with a social mission, and most developers. Detroiters can sniff out newcomers with questionable motivations, but one gets the sense that Eleos is not just in it to cash in.

Aside from offering good coffee, the shop is a community meeting space with events like the monthly "Coffee With A Cop," computer classes, and an annual street carnival. And though Eleos is a part of the Eleos Ministry in Kansas City, which operates a location there, the group lives in a house near the shop. 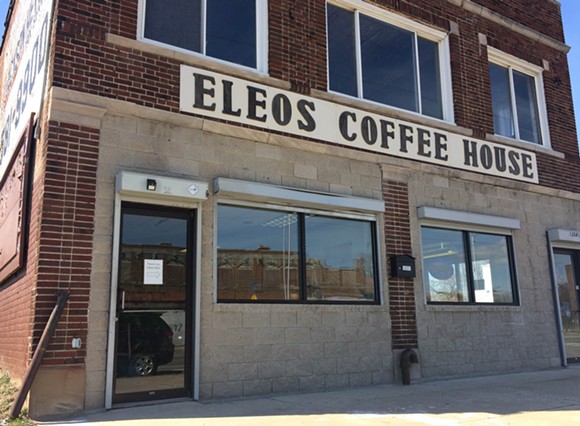 
Interestingly, the Cumberford clan didn’t know the Adams prior to moving here. Both families happened arrive in Detroit with the intention of opening a ministerial coffee shop, then met at the Restore Church at Joy Road and Linwood Street where they all happened to start worshipping. That good fortune, they say, was God at work.

We sat down with Jacob and Sean to discuss Eleos (Greek for “mercy”), setting up shop in Dexter-Davison, and the shop's beans.

MT: Why did you decide to move to and open in Dexter-Davison?

Sean: "'Where can we have the greatest impact?' It's not just necessarily about 'Hey, where can we sell the most cups of coffee?' But, 'Where can we impact a community the greatest?' And this is one of those. MT: What has the reception from the neighborhood been like?

Jacob: "Overwhelmingly positive. People appreciate that we are opening a business and living here. There are a few naysayers, but .... we've also seen that people are not just coming in and saying "I need a cup of coffee. Can you give me one?' But, 'Hey, I want to support you. Thanks for coming to the neighborhood.'"

Sean: "Just this morning I was cleaning the windows and two people walked by and said "It's really good that you guys are here," so it's coming from different directions. It can be from 'Hey, you guys are giving us hope for businesses to come into the community.' It can be the spiritual aspect: 'It's great that your here to encourage, to lift up, to love your neighbor.' So it's being received from many different directions, and that's what I love about it." 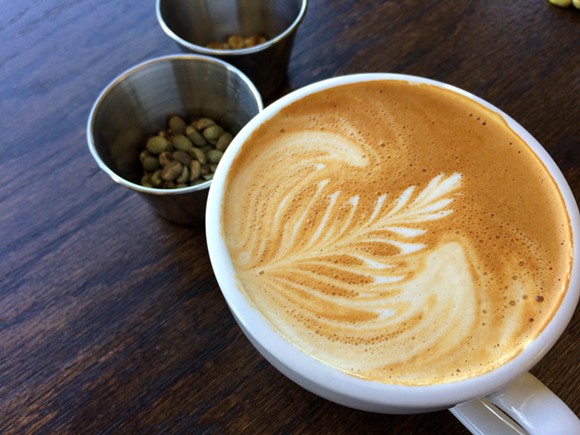 Photo by Tom Perkins
Eleos's latte.
"You can have some people who come in and say, 'Oh, you're a church organization,' and (question that), but they see the fact that we're bringing something to the community to help support, to raise hope, to encourage others to do the same, and we're wanting to be a part of the community, so they see that that, and they like that we're doing stuff.

"We’re not here forcing our religion. We're here as a 501c3 non-profit. We're not denominational-based or from a certain church, even though we have a common place of worship. We are here to instill Godly values in a community, which I don't think would be negatively received. Love God and loving your neighbor. That's one of the things in our vision statement - Love your neighbor. So I say watch us, see what kind of an impact we're having ... because I know that it's a positive impact."

MT: Tell me about your beans.

Jacob: "We get our beans from all over the world, but we specifically get them from green bean suppliers who are doing similar work in the country that they come from with coffee farmers. So, for example, our Ethiopian coffee we get through the Ethiopian Coffee Exchange, and they're working to provide health education and church development among the coffee farmers there.

"Our owner, Dan (Smith), is our roaster, and he has specifically selected those beans that make sense for our budget. Dan is in Kansas City, roasts every week, and that allows us to provide a very fresh cup of coffee." 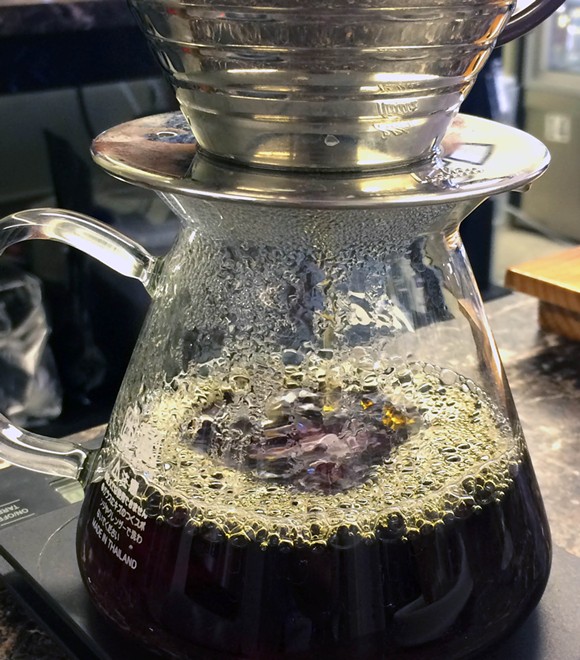 Photo by Tom Perkins
Pourin' over.
"The four primary coffees that we use are Ethiopian, Sumatran, Honduran, and Brazilian."

MT: What kind of food do you offer?

Jacob: "We get our pastries from Milano Bakery on the east side, and our wraps from Fresh Corner Cafe, which is another local Detroit business that is pretty new. But it's light and healthy, and that's different here. You can't always easily eat healthy around here."

Sean: "It's also one of the ways that we're able to partner with other local businesses, which is something that we wanted to do when we looked at 'What else can we do here?'"