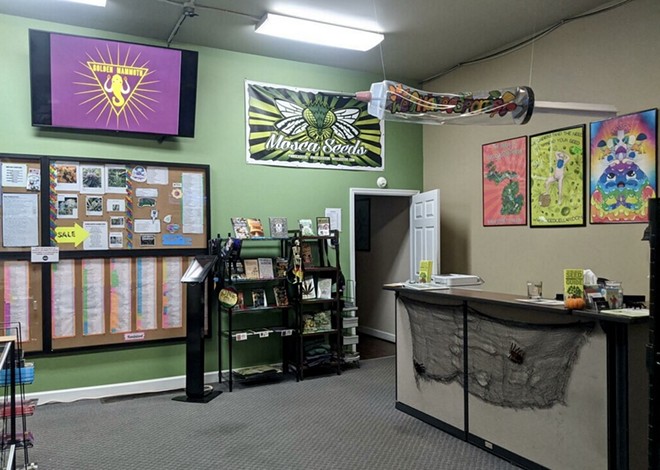 Seed Cellar, the state’s largest cannabis seed bank, will soon be employee-owned with plans to launch a co-op for customers.

Owner Roger Maufort plans to turn over the Jackson-based business to his four employees at the beginning of next year.

Seed Cellar, at 1620 E. Michigan Ave., will also launch a co-op for customers, who will receive bonuses and discounts.

“It’s phenomenal that Roger is gifting us the business to carry on,” manager Kate Brown, 35, tells Metro Times. “It’s a very cool opportunity for us.”

Seed Cellar sells about 3,000 strains from 80 different breeders. Customers come from all over the state and as far away as Wisconsin, Indiana, Kentucky, and Tennessee, where cannabis is still illegal.

“Interacting with people from out of state, it makes me grateful for being in Michigan,” Brown says.

Seed Cellar began as the Jackson County Compassion Club and held medical cannabis clinics at city hall. It’s now one of the largest — if not the largest — brick-and-mortar seed shop in the country.

With a knowledgable staff, growers can learn the ins and outs of growing cannabis, from germinating seeds to ridding plants of spider mites.

Don’t know where to start? The staff helps growers find the right seeds for their tastes and growing environment.

By getting seeds at the store, buyers can be assured they are getting legitimate genetics, Brown says.

“There are seed banks popping up everywhere, and there are places online for very cheap,” Brown says. “People are getting ripped off and growing bad seeds. Other thing has been legitimate genetics.”

One of Brown’s favorite strains is South African Kwazula, a 100% sativa he says is used in rituals by an African tribe.