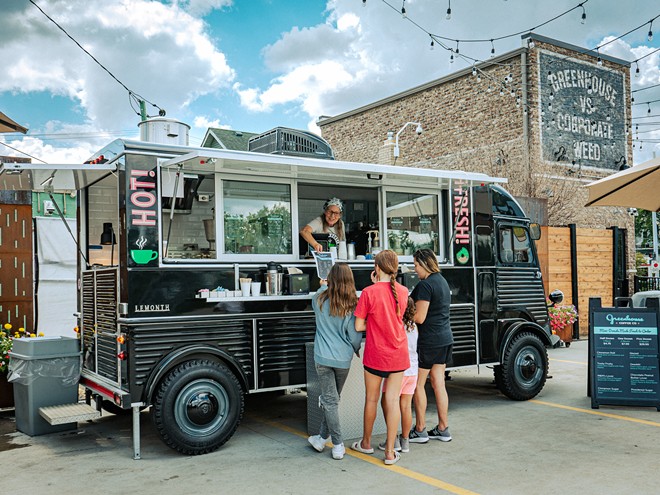 The Greenhouse of Walled Lake dispensary is serving up more than cannabis.

Customers can now get freshly made coffee and doughnuts sold out of a vintage-style French LeMont truck in the rear parking lot of the dispensary.

Millen took no shortcuts. He says he spent more than $100,000 on the truck, which was sent from Argentina, and bought a full-size cappuccino machine and a state-of-the-art coffee maker.

Millen has 50mg packets of Tree House CBD that can be added to the coffee, which Millen says reduces anxiety and increases concentration.

Customers also can buy THC tinctures or powder in the dispensary and add it to their drink for a cannabis-infused buzz.

He’s also selling mini-doughnuts with flavors such as Boston cream pie, cider, Fruity Pebbles, vanilla, chocolate, and cinnamon sugar. Using a machine that can churn out 2,400 doughnuts in an hour, Millen makes the doughnuts fresh and on demand.

“I get bored easily,” he adds. “I’m always looking for a challenge.”

To get to know his customers better, Millen says he’ll be helping serve the coffee and doughnuts.

“Rather than standing in the lobby of my store, it gives me a chance to be outside and meet the people who come to my store to find out what they like and what they don’t like,” Millen says.

For Millen, the coffee truck is part of a bigger plan.

“My mission in life is to help make cannabis mainstream,” he says.

The Greenhouse of Walled Lake is located at 103 E. Walled Lake Dr., Walled Lake. More information is available at greenhousemi.com.