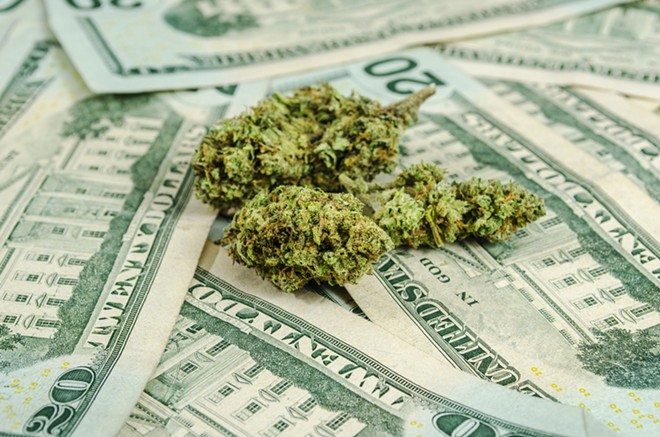 Shutterstock.com
A Detroit man is accused of selling marijuana from a vending machine outside of his house.

Marcus Cornwell wasn’t selling pop or snacks from the vending machine outside his home on Detroit’s west side.

According to federal authorities, Cornwell said he’d been making $2,000 a day for the past five years selling marijuana from the vending machine attached to the side of his house at Mettetal Street and Fenkell Avenue.

Agents with the Bureau of Alcohol, Tobacco, Firearms, and Explosives (ATF) executed a search warrant at Cornwell's home on March 16 and found 18 guns, dozens of rounds of ammunition, several pounds of marijuana, and more than $12,700 in cash, according to a criminal complaint in the U.S. District Court for the Eastern District of Michigan.

Cornwell said the machine was his primary source of income and that an employee lived with him, according to the ATF.

He also dubbed himself a gun collector and said that “he is aware he is not allowed to possess firearms.” He told agents that most of the guns were purchased “from individuals off the street.” At least two of the guns had been previously reported stolen.

Cornwell was charged with being a felon in possession of a firearm, which carries a maximum penalty of up to 10 years in prison.

The ATF was tipped off on Jan. 7, a day after a popular TikTok video of the machine was posted.

The tipster alleged Cornwell was selling marijuana out of the vending machine and also sold drugs and guns to minors.

ATF agents said they bought a total of 9.4 grams of pot from the machine on two separate occasions in February and March.

Cornwell has an extensive rap sheet. He’s been convicted of six felonies between 1997 and 2011, including armed robbery, identity theft, and multiple gun charges, according to the ATF.

“Cornwell was sentenced to more than one year in prison for each of these prior convictions,” the complaint states.

During an April 28 court hearing, Cornwell was released from jail on a $10,000 unsecured bond. The conditions of his release include not operating a vending machine.

A preliminary examination in the case is scheduled for May 19.