After the 2000 Showdown in Motown, the boxer’s victory was revoked after he tested positive for marijuana 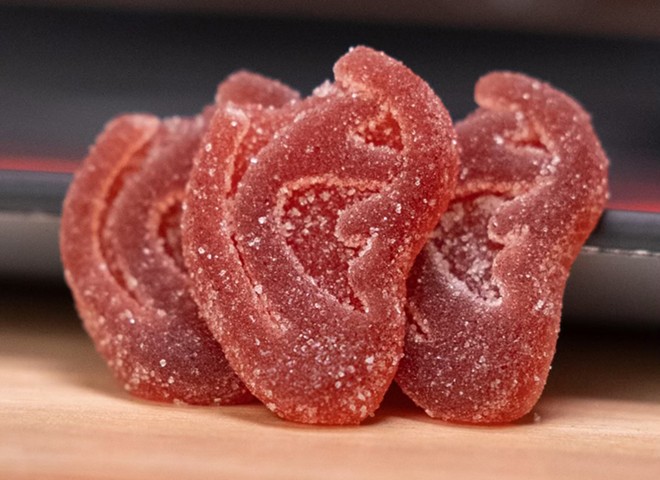 Tyson 2.0
Mike Tyson's cannabis-infused edibles are in the shape of a human ear with a bite out of it.

There's a bit of genius, and bald-faced shamelessness, in the marketing of Mike Tyson's new cannabis enterprise, Tyson 2.0. Tyson, the former heavyweight boxing champion, actor, and now marijuana entrepreneur, is most famous for having bitten a piece off the ear of opponent Evander Holyfield during a 1997 championship fight. Hence, his gummies are named Mike Bites — and they’re in the shape of an ear with a bite out of it.

Apparently, Mike Bites are so popular in the areas where they've been introduced that production facilities can't keep them in stock. Common Citizen, the largest cannabis company in the state, currently produces flower for the Tyson line in Michigan, although it isn't producing the ears.

"Every time they open a new market, it just leaves the assembly line, boom," says Tyson.

Tyson 2.0 produces flower, concentrates, and edibles that are available in some 14 states. In Michigan, Tyson 2.0 flower products are on shelves in the Detroit area and across the state. Earlier this month, Tyson visited LIV (a Common Citizen partner) in Lansing to pose for selfies with customers, give a few interviews, appear at a 420 festival, and promote the Tyson 2.0 brand.

His association with marijuana goes back to an early age. "I had some hyperactivity in my genes so my mother gave me marijuana and liquor to calm me down," Tyson recalls. "It didn't work. It made me go to sleep, but it didn't calm me down. That's how I got involved with marijuana. It was around my house. My family was sex workers, all kinds of drugs and liquor was around the house. I must have been 12 or 11. When I did [try it] I knew I was going to be involved with this for the rest of my life. I didn't want to stop."

Even when Tyson was boxing, he used marijuana to help relax and focus, though there was a period from about ages 18 to 32 when he stopped using it. But in October 2000 when he fought Andrew Golota in Detroit, billed as the Showdown in Motown, Tyson says he smoked before the fight. The fight was initially scored a TKO when Golota refused to come back out for the third round.

"Before I smoked the joint I was scared to death," Tyson says. "And then once I smoked it he was scared to death. ... After that fight, I said I should have been doing this, I should have started smoking [before fights] earlier. They fined me about $300,000 because I broke this guy's cheekbone, his backbone, his eye socket, because they said I was on cannabis and they said it was on an illegal substance.”

Because Tyson tested positive for marijuana after the fight, his victory was overturned and changed to a no contest. The Michigan Athletic Board of Control suspended him for three months. 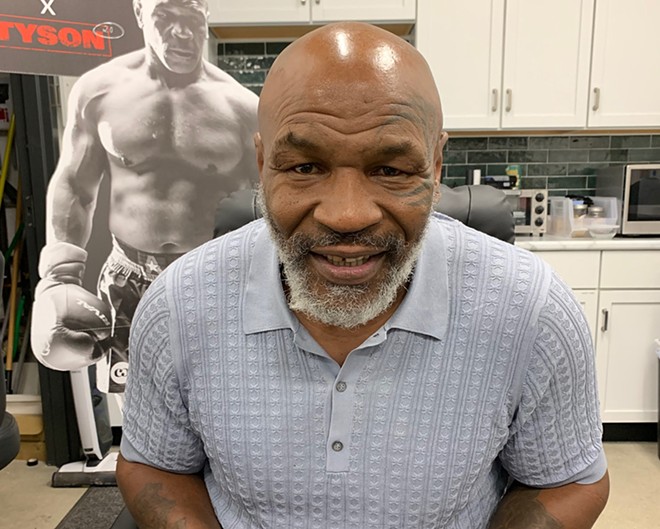 Larry Gabriel
Mike Tyson at a recent visit to a Michigan dispensary.

Now Tyson uses the stuff every day. The Tyson 2.0 line includes greenhouse-grown flower and sun-grown strains. One line of products is tied to another colorful episode from Tyson's past. Toad, a top-shelf strain, recalls Tyson's tripping from licking a psychedelic toad — an experience during which he claimed to have died. Tyson 2.0 also produces pre-rolls, drinks, concentrates, and edibles.

On a reviews page on the Tyson 2.0 website, Tyson samples numerous of his own products in one sitting and gets increasingly toasted as the video rolls on.

As wild as much of Tyson's past sounds, he presented himself in a calm and convivial manner on Saturday, attributing his considerable success to god and expressing the desire to help others who have been imprisoned. And he says he really doesn't care about the money.

"I don't put money in any equations in my life, but I will be very successful," he says. "If I thought about money I wouldn't be successful. Once I made money I wouldn't have the drive anymore. I have a perpetual drive, it just doesn't stop."

That, as well as anything else, explains what we've seen of Mike Tyson.