Q & A With Illy Mack 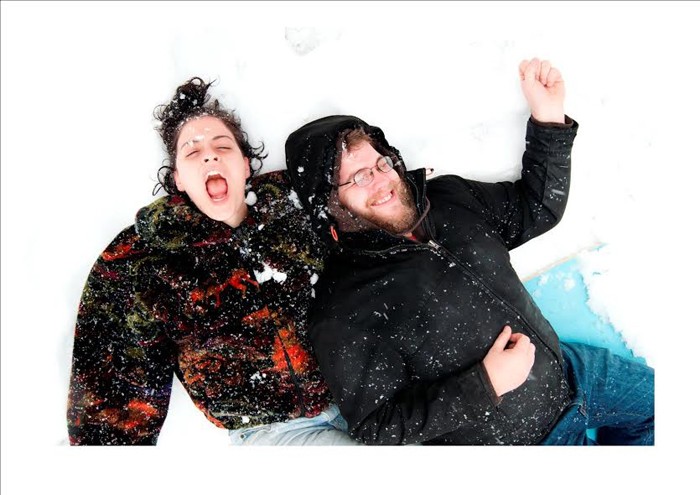 How do you know you’re at an Illy Mack concert? Maybe it’s the way the keyboard is up on an ironing board, or that the guitar’s fitted with an auxiliary drumstick for extra fills, or how the singer has a saxophone strapped to her back. Perhaps it’s the continuous banter between songs that’s charming and blunt — sometimes even frisky. Or that sound: a little garage rock rawness, a rumble of bluesy brashness, but also with bits of Motown soul. It’s minimalist but punched up with catchy melodies, cool bass grooves and Jen David’s low, husky voice, suitable for the erratic cadence of punk or the soaring wail of a ballad (and harmonized nicely by the disarming falsetto reach of Steven Kendzorski).

The pair has just finished a snowball fight when we sit down to talk. After they warm up, they’re ready to rehearse some new material. In March, they’re releasing a cassette tape of older, more polished recordings, along with newer, rougher, lo-fi treasures that they “just had to get out.” They’re both lifelong musicians from metro Detroit who’ve known each other for 10 years, spending the last five of them together as Illy Mack (the band is named after a renowned local sketch artist). Both are music teachers; Kendzorski teaches guitar at the Detroit School of Rock and Pop Music while David teaches piano with the Detroit Music Teachers Collective.

They’re growing up, now. After five years, they might still squabble like snippy siblings or maybe an old married couple, but their approach and overall perspective has matured.

Metro Times: Your first show back after a couple of years of sparse local performances is going to be the announcement party for this year’s Blowout; how’s the scene changed since you started, and are you excited for Blowout?

Jen David: Blowout has certainly changed, but that’s fine. It’s still helping bands get exposure. People are still playing and making great music locally — that’s what really matters. There’s no less live music, but a lot of songwriters I know are in a writing spot now instead of a playing-live spot.

Steven Kendzorski: I’m not educated on all the politics of Blowout or what’s happening, but I will say I enjoy any situation where I can play music with other people, and people are there to enjoy it.

MT: What have you been working on these last two years?

David: I bought a house, I had dogs. Both of us fell in love. I guess that falling in love, having girlfriends and boyfriends, takes up a lot of your time too. It wasn’t an intentional break; it felt natural.

MT: Why was it important to come back together, and how easy was it to connect again?

Kendzorski: It was like no time had passed; writing came just as easily as before.

MT: Different in any particular way or feeling?

David: And that has emotional impact, going through these things, feeling these things, living life has made me overall more creative; it feels better to play music, songs happen faster, there’s something to extract.

Kendzorski: It ended up more, maybe … loose? And more melodic and improvisational. Still the same amount of energy, it’s just different … where we’re putting the energy, in terms of songwriting.

MT: What do you mean by that?

David: Yeah, Steve. What does that mean?

Kendzorski: I just mean, earlier we had more basher-tunes, essentially.

David: Ah, I think what Steve’s saying is that we’re less angry as people, so it’s not as aggressive.

Kendzorski: There’s elements of aggression, just not as garage-y.

MT: Energy’s always been key for you — whether in the music, or in your playing or just your personalities sparking off each other.

Kendzorski: Just passion. Not necessarily even about the music; it’s just we can’t perform without being emotionally involved.

David: It’s like an Easter dinner with two hams at the table.

David: Two hams at each end, just hamming it up the whole dinnertime. We’ve known each other so long that we know how to get on each other’s nerves, but also how to make each other laugh really hard. You connect more with a two-piece. You can’t not share a lot of your life with them.

MT: It’s just you. No third party to take sides. That can be intense.

Kendzorski: Right, it forces compromise. Three- or four-piece bands are usually democratic, but because it’s just us, we can never make a decision unless we’re both on the same page.

David: We’ve argued so long about the stupidest, stupidest things.

MT: What can we anticipate hearing on the cassette in March?

David: Songs we’ve been working on that Steve’s really tailored. It sounds very professional, very good. But there are also newer songs that have that looser, freer energy done in a couple of takes on a four-track in Steve’s basement.

Kendzorski: It’s a nice snapshot of what we’ve been doing the last year-and-a-half. There are more sophisticated things happening harmonically and as a result of time passing, with us finding ourselves as songwriters the last song we wrote for the cassette is one of my favorites: really juxtaposes the intricate playing against more simplistic stuff, focusing more on vocals. It’s neat for an Illy Mack song where you’re as attracted to some of the more technical aspects of what’s happening as much as the lyrics or harmonies.

David:  And we didn’t want to slow down the recording we’d started last summer. So some songs we just had to get out and be happy with instead of being overly particular. My voice cracks at the end of one song and we left it instead of redoing it.

MT: Through the years, through “the break,” what’s made Illy Mack so important to you both?

David: Illy Mack, to us, is a constant river. It’s never-ending. We’re just friends, there’s nothing to prove or anything. If we hadn’t played in five years and then came back, that would be fine too.

Kendzorski: When we first came out, we played with groups that weren’t like us but surprisingly embraced us and our music. We’re kinda coming back for selfish reasons, though; we just really like playing this music.