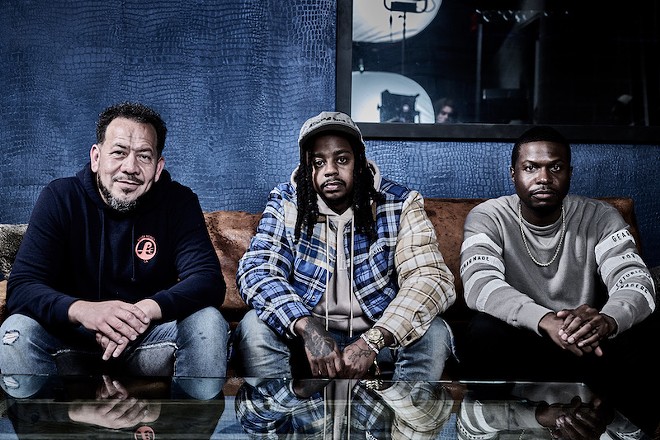 Courtesy of Interval Presents
Rapper Babyface Ray (center) with Elliot Wilson (left) and Brian "B.Dot" Miller (right) of the Rap Radar podcast.
Babyface Ray is having quite a year.

Despite being known as a rap vet to many, it seems that the artist is finally getting his just due with a wider audience.

An evening with Babyface Ray, the new face of Detroit rap

The Detroit rapper has been on an impressive press tour to promote his latest album, MOB, which was released on Dec. 2. In the last week, Babyface Ray has done interviews with GQ, The Breakfast Club, The Hip Hop Lab, and even performed on The Tonight Show with Jimmy Fallon.

The “Tunnel Vision” rapper is keeping the streak going by being the latest guest on the coveted Rap Radar podcast hosted by Elliott Wilson and Brian "B.Dot" Miller.

Babyface Ray chats with the journalists about how he maintained and stayed focused throughout his decade-long career, why he doesn’t want to work with a major label, and what led to the meeting between him and THE Babyface.

MOB is not the first project the rapper has released this year. Babyface Ray kicked off the new year with the critically acclaimed FACE back in January. One of the songs on the album, “Sincerely Face,” has been listed as one of Pitchfork’s 100 Best Songs of 2022.

You can listen to the full interview on the Rap Radar podcast.

Born and raised on Detroit's Westside, Alex Washington is about as Detroit as they come. She judges your coney island order and serves a mean side-eye when anything across Eight Mile is called "Detroit." Her writing has been published in Real Detroit Weekly, The Detroit Free Press, Model D, BLAC magazine, and...
Scroll to read more Music News articles