The Nashville singer will perform at Detroit’s El Club 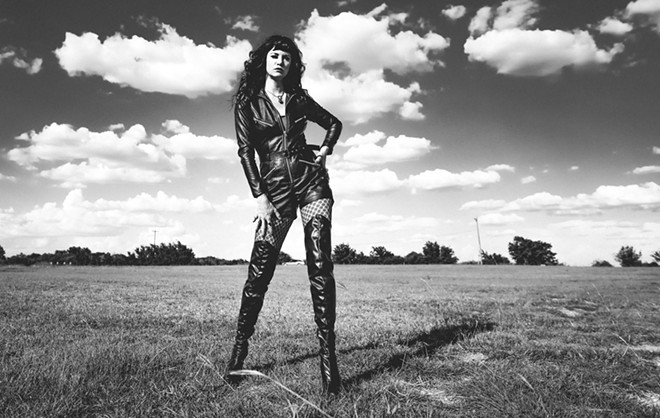 Nikki Lane knows exactly where she wants her music to be — right between rock ’n’ roll and country.

And that’s exactly where it winds up on Denim & Diamonds, the album she released in September, and in her, at times, raucous shows.

“That’s the spot for me throughout my career,” she says in a recent phone interview. “I’ve finally gotten there on this record. I listened to rock ’n’ roll. When I talk, it sounds country. I tell stories in my songs, so that’s it (country) too. But I want to have an edge to it.”

Told that when she’s hitting the sweet spot between rock ’n’ roll and country, she’s in the same place as Elvis Presley, when he tore up the South with his mid-’50s rockabilly, Lane was flattered by the comparison.

“I don’t deserve it, but to hear my name in any sentence that has Elvis in it is an honor,” she says. “That’s kind of like Homme.”

Homme would be Josh Homme of Queens of the Stone Age, who produced Denim & Diamonds, Lane’s fourth album. So how did she get Homme, who collaborated with Iggy Pop a few years back, to work on her record?

“My previous manager had the idea, he was kind of a music fan first… I was kind of like, ‘bullshit, if you think you can get that guy on the phone, fine,’” Lane says. “I felt really lucky to get him during a time when we had so much time off and so little time. I got to have an edgier push to my music.”

That desire to be edgier emerged months before she teamed up with Homme.

After recovering from a too-long stint on the road that was ended by COVID-19, the “Highway Queen” (“After touring so long, I realized that wasn’t just my most popular song, it was me,” she says) Lane started writing new songs, among them, the pulsing, hook-filled, Stones-riff driven, Springsteen name-dropping rocker “First High.”

But she said Homme inspired her to take closer to the rock ’n’ roll edge.

“You’ve just got to lean into it more and more,” Lane says. “That’s fun to be able to find inspiration in someone’s art as a muse for the new project. It was really fun to work with a bunch of artists I didn’t know — ‘Will they like me? I like me.’ I’ve been really lucky with my producers Dan (Auerbach), Dave Cobb, and Josh, they pick the right people and the key is to go for it.”

Many of the Denim & Diamonds songs rock even harder live than they do on record — songs, like the country-tinged “Born Tough,” the Stones-ish “Black Widow,” and the swaggering title cut, a song of independence with the chorus “I can by my own damn denim and diamonds.”

But there’s some quieter, more country-ish material, like the gently rocking, inspirational “Try a Little Harder” and “Good Enough,” a sweet song based on Lane’s grandparents’ lifelong relationship — “I decided I should write at least two love songs in my career,” she quips.

That song is, obviously, taken from Lane’s life. So are many of the rest of her compositions, even though they don’t immediately sound autobiographical.

“The thing I’ve seen is a lot of songs start from my standpoint, then shift to the people who are going through it, what they’re doing,” Lane says. “It’s like the movie ‘Big Fish,’ which is one of my favorites, telling a big story through real stuff.

“In my family that’s kind of what our life has been, a little over the top,” she says. “Nikki Lane is the character that came from being a real girl who couldn’t control all these little things but found a way through. I use it to my advantage.”

Lane’s been called the Queen of Outlaw Country and is an annual hit at the Americana Music Awards and Festival. But, she says she only uses the words, “outlaw” and “Americana” to help people get a bead on where her music is coming from.

“My dad’s friends listen to the radio,” she says. “They haven’t even made it to Sirius XM… When I go to Montana and the fishing guides are listening to Cody Jinks and (Chris) Stapleton, which they’ve heard on the radio, it gives you a bridge to them, that I’m similar. What I know is I’m not pop country. Outlaw or Americana helps tell people that.”

On a tour that will take her through the end of the year, Lane says she was planning to drive herself, separate from her band, so she can roll into a city and “buy up all your antiques.” And, she says, the band likes it because “it’s the first time we’ve been to sound check on time in years, which is probably true.”

Some of those purchases will end up in High Class Hillbilly, the Nashville shop she’s run for a decade that handles vintage clothing and Americana, including items she’s picked up on tour.

Lane has kept HCH going, even though she’s spending less and less time in Music City.

“I really like being able to put my heart into something good,” she says. “I know the store’s good. The music career, I felt a lot of uncertainty. I kept the store just in case. Now I keep it just because.”

Other purchases can end up on stage as Lane dresses in eye-catching vintage outfits during her shows.

“I got to do some modeling early on because I’m tall and I try to find things that look cool,” she says. “It’s fun to play dress up. Now it’s part of Nikki Lane, I lean into it and into the character.”