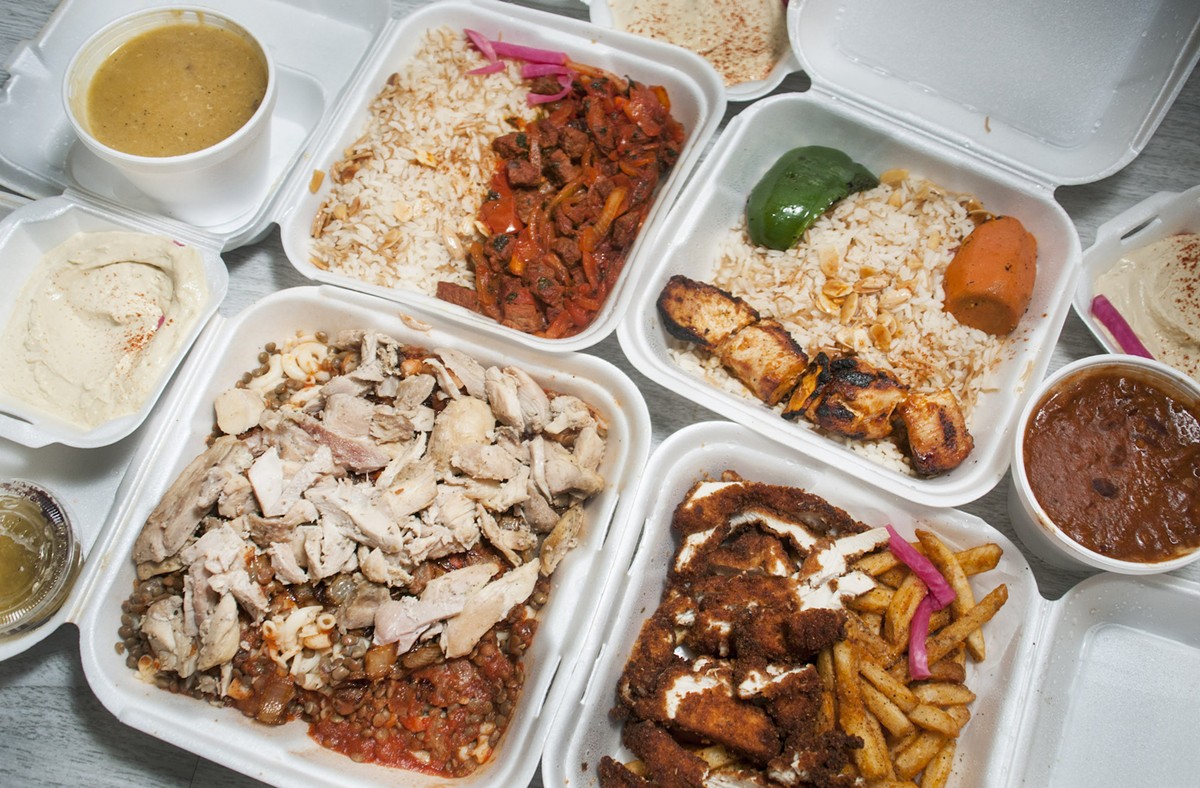 A regular topic of debate among Hamtramck's residents is which of the city's many Mediterranean eateries make the best sandwiches and cheap plates. Topping many Hamtramckans' lists over the last year is Boostan Cafe at Holbrook and Conant.

When it comes to the Mediterranean standards, the tiny carryout restaurant's sandwiches are indeed among the best. Its tawook sandwich comes with borderline boulders of charred, white-meat chicken that the kitchen spices perfectly, and the restaurant's falafel is moist and flavorful.

Given that the familiar is so good, it's tough to get motivated to gamble on other menu items, especially those that are unique to the area. But Boostan is perhaps at its best when it gets weird. Beyond Mediterranean sandwiches, the Yemeni-run restaurant rolls into its pitas the flavors of Yemen, Egypt, and the U.S.

For example, the shat shawish sandwich — one of the Boostan's best — tastes like a Tex-Mex Mediterranean crossover with shredded chicken, tomatoes, pickles, jalapeños, and a tangy "Boostan sauce" (traditional garlic sauce combined with house-made ranch, and a few other spices) wrapped in a pita.

The baladi dakkah sandwich is a more traditional dish from Yemen, consisting of moist ground lamb flavored by garlic, cilantro, tomatoes, coriander, and onions. Dakkah is similar to the hashwi, which is served with Boostan's already tangier-than-most hummus.

Another sandwich that feels Americanized is the signature Boostan Shawarma sandwich, which is rolled with shredded chicken, shredded yellow Kraft cheese, lettuce, tomato, onion, banana peppers, and Boostan sauce. Shredded Kraft cheese is also prominent in the Kraft With Eggs sandwich that arrives on a sesame bun with scrambled eggs — the name tells the story.

The Magnoona and Halawah With Cheese sandwiches also taste like breakfast fare (breakfast sandwiches are common in Yemen). The former translates into "crazy" and is made with sesame sub buns with scrambled eggs, strawberry jam, cream cheese, cheddar cheese spread, sweet sesame spread, and goat cheese. The Halawah is a similar sweet and salty sandwich that seems more like a side than an actual meal, with salty feta cheese, goat cheese, and the sweet sesame spread.

Beyond the sandwich menu — which also includes burgers and subs with selections like shrimp papaya — are the entrees. The best on the list is the koshary, a dish of Egyptian origin that is a jumble of long grain rice, noodles, macaroni elbow, and lentils sauteed in a mildly spicy tomato-based sauce with cumin and a heavy hit of salty, crispy fried onions. The mess is greatly enhanced with two salty and lemony sauces served in portion cups. Add chicken shawarma to the mix for an additional $2.99 — well worth it. Another unique-for-these-parts dish is the meat soghaar, which is a traditional Yemeni plate of small cubed hunks of chewy lamb in a deep red mix of sauteed onion, tomatoes, and parsley.

Based on name alone, the Chicken Cream Chops isn't something I would typically order as it sounds like an item pulled off of a Cracker Barrel menu. But there's no cream here, and it's instead made up of salty, breaded, fried chicken chopped into narrow strips. The bird marinates overnight in a mix of olive oil, garlic, and Mediterranean spices, and is then breaded and fried the next day in "American spices." I found it more reminiscent of something that a suburban Detroit mom would serve next to a pile of canned corn in the 1980s than something that a Yemeni chef prepares in Hamtramck. That's not a strike against it — quite the opposite. It's one of the reasons I like Boostan.

As expected, the shish tawook chicken dish is as excellent as the tawook sandwich. Each entree comes with rice or fries; soup or salad; and hummus. Pick from a lamb chili that's thick like paste and holds a smokey mix of lamb, tomatoes, and kidney beans, or the lentil soup, which is better than most out there. The dishes also come with almond rice or the kind of seasoned fries that you might find at a diner.

That sort of mix — diner fries next to koshary next to Chicken Cream Chops next to soghaar — is the result of Boostan's owners, Yemeni-born brothers Farhan Al Najar and Syaih Najar, working with chefs from Egypt, Yemen, and America. It makes for a one-of-a-kind menu, which is especially interesting when one considers the debates over authenticity and culinary purity that we hear these days. "Our chefs are from all over, each one has good taste for these dishes. There are Americans, Yemenis, and Egyptians," Farhan Al Najar says. It wouldn't be natural for this group to produce only one nation's dish, and that works for me.