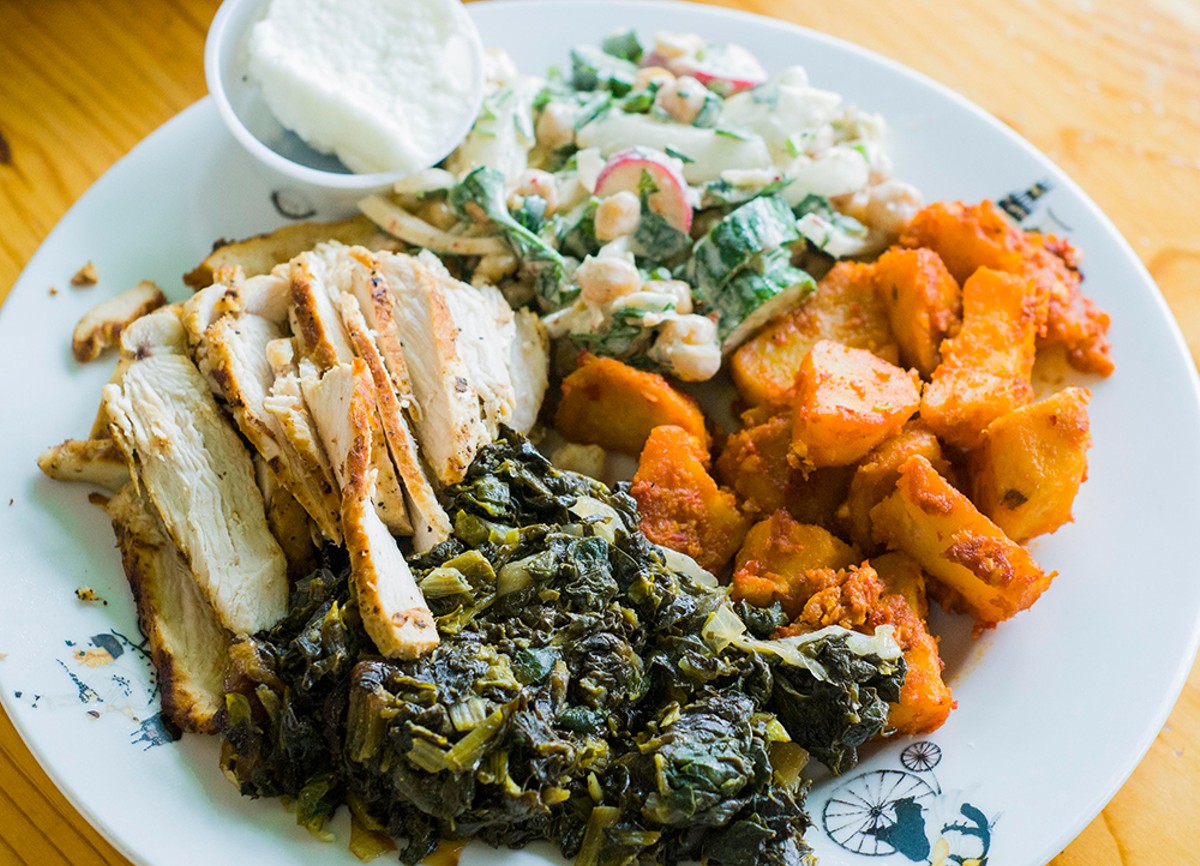 When I inquired with the guy behind the counter at Exotic Syrian Deli and Bakery about the difference between Syrian and Lebanese shawarma, he explained that "back in the day, they were the same country" and shawarma recipes varied more by family than region.

Indeed, it's all Levantine, but I suspected that maybe in the same way Detroit and New York-style pizza are entirely different beasts, there could be some variation based on geography. Not necessarily, and I've heard similar explanations from Lebanese chefs in Dearborn.

The Syrian village from which Exotic Bakeries' recipe book originated is a small one, located about an hour outside the northern city of Aleppo. Owner Tamara Criggs' parents left that village for Ann Arbor to open the restaurant around 27 years ago, so the food that's made here is like what you'll find nowhere else but that village. Metro Detroiters who are well-versed in Lebanese cuisine due to Dearborn's bounty may find a new experience at Exotic Deli.

The other unique part of the equation is the presentation. The small restaurant sits in a labyrinth of a strip mall on Ann Arbor's north side among other excellent spots like Cardamom Indian Restaurant, and offers all pre-prepared dishes, many of which are sold by the pound. Those are on display inside the type of deli cooler that you would find in any deli, and there's a list of sandwiches, including the Ypsi and the Frank. The name doesn't lie — it's a Syrian deli. The large sandwiches are wrapped in a pita and pressed between a sandwich maker, while the prepared entrees and salads are put in a microwave. The latter is not ideal, but it works.

You either order from a selection of about 20 sandwiches or salads, or pick a meat — for example, the chicken shawarma — and surround it with sides like the Super Sour Spinach Devine. It's a moist dish of dark green spinach, onion, and garlic. It's sauteed in olive oil and tastes a lot like the spinach stuffed into Lebanese spinach pies. Surprisingly, it appears solely to be the work of lemon, as there's no evidence of sumac.

Aside from the Devine, an excellent recipe is the Rich Red Pepper Kibbeh —  ground beef and bulgur sauteed with onion and Syrian spices, all of which is "dipped in red pepper sauce." The latter is a deep red, deeply flavorful paste made of ground walnuts, red peppers, dried red pepper, pomegranate molasses, olive oil, and garlic — not unlike mohamarra, but there are differences in this village's recipe.

Veggie maqluba is a casserole-like Levantine dish made at Exotic Deli with rice, fried eggplant, red bell pepper, green bell pepper, and caramelized onions, all tossed with crush red pepper and olive oil — one of the better plates. Arguably the best salad on the menu is the cauliflower salad, in which Exotic Deli flash-fries cauliflower with that magic formula of garlic, lemon, and olive oil, then mixes it with parsley and rich, creamy tahini that adds pleasurable depth. The slightly crunchy, browned cauliflower makes the dish.

The sauteed potatoes are brightly flavored and bright red in appearance, with a sauce of sweet red peppers, coriander, garlic, and salt, though the potatoes were a bit on the dry side. Several of the baked goods — the meat and spinach pies — suffered from the same issue, and were the only blemishes in otherwise solid experiences.

On Exotic Deli's sandwich menu, the Syrian Burrito is almost a Mission-style burrito with chicken shawarma, rice, lentils, crispy onions, crunchy lettuce hearts, tomatoes, pickles, and garlic sauce stuffed plump inside of pita bread. The Frank is a fine mix of beef kefta, garlic, tabbouleh, and hummus, while the ajjeh is a traditional Syrian dish that's essentially an omelette wrapped in pita. Criggs says every family has their own approach and recipe, much in the same way many here have their own mac and cheese recipe. Here, it's made with eggs, zucchini, squash, parsley, and 13 spices, along with a little flour to provide some substance. Like everything else with Criggs' family stamp, it's excellent.