A meal here is a journey through a galaxy of big and bright flavors, contrasting textures, and heavy doses of umami 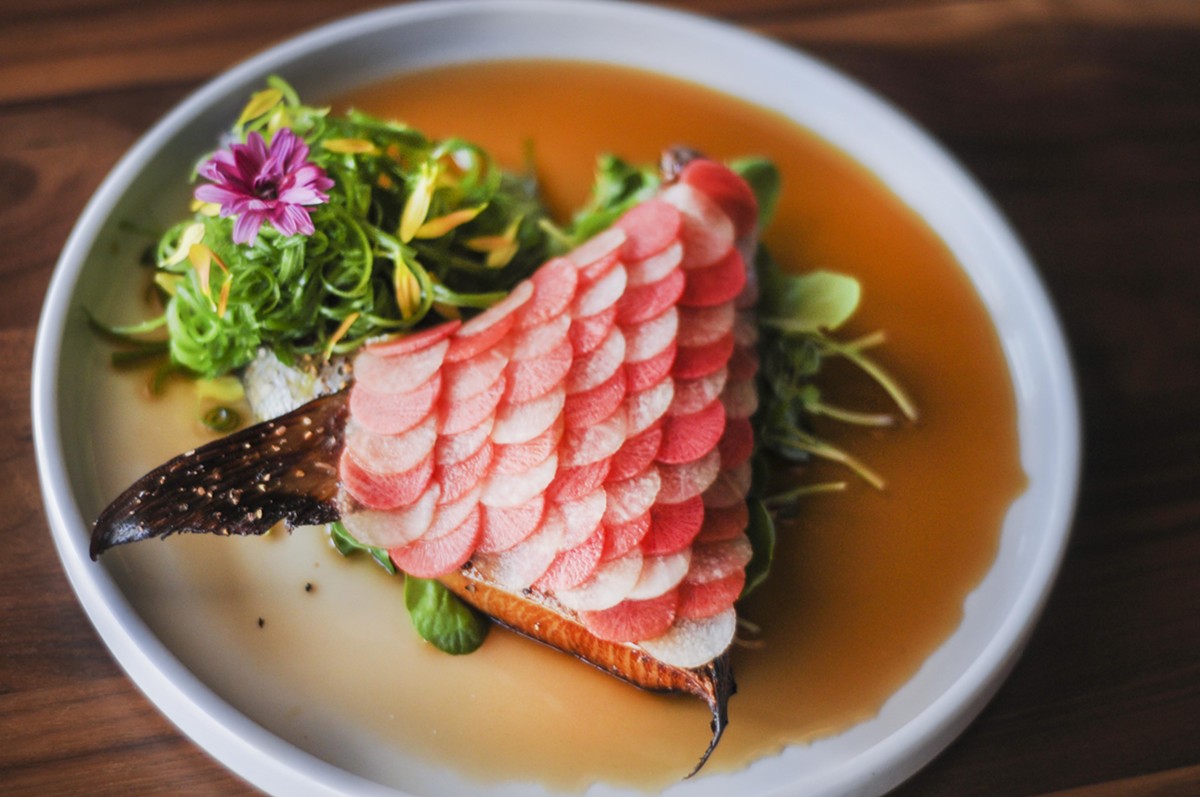 Among the best plates at Tiger Lily is the hamachi kama, or grilled yellowtail tuna collar. Tom Perkins

Try to find a sushi roll in metro Detroit that’s richer and more umami-packed than Tiger Lily’s Shikotsu. Chef Chris Vasquez rolls and tops it with A5 wagyu beef, cucumber, marrow butter, fried shallots, scallion, spicy garlic sauce, and egg yolk. It might also be hard to find a better presentation. The name “Shikotsu” was taken from an anime character and means “hollow,” and a server positions a big, halved bone that’s hollowed out except for marrow, brown butter, and miso above the roll. The bone is hit with a torch and the mix drizzles on the roll, intensifying the already heavy umami, imparting a sweet dimension, and adding a nuttiness from the brown butter. Cucumber and citrus from yuzu counterbalances the roll’s heaviness.

Tiger Lily’s shima sugi makes a similarly dramatic entrance in a covered bowl with smoking sakura powder and wood chips that imparts a fragrance on the striped jack, or aji, which is adorned with shallot and wa yakumi, a simple-but-deep blend of shiso, myoga, chives, scallions, and ginger.

Sometimes, these kinds of over-the-top productions can feel a bit like flashy wheelies that, in the end, lack substance, but that’s not the case at Tiger Lily. The food lives up to the bold, colorful presentation’s hype. A meal here is a journey through a galaxy of big and bright flavors, contrasting textures, and heavy doses of umami.

The shima sugi was a dish served at Momotaro, a venerated Chicago Japanese restaurant at which Vasquez worked prior to returning to metro Detroit, where he grew up. Vasquez was tapped by Hometown Restaurant Group, which also owns neighboring Public House and One Eyed Betty’s, to helm Tiger Lily’s kitchen, who poached sushi chef Ivan Dalou from Brimingham’s Adachi, and they put in place a solid crew.

The akami to toro is anchored by Bluefina brand tuna akami. The sustainably farmed tuna company owns millions of acres in the Pacific Ocean, and Vasquez says their akami is less metallic than wild caught tuna, with more umami. The flavor is clean and glossy, and the addition of fatty otoro adds another layer and intensifies the akami’s umami, while sesame oil and chives round out the package. 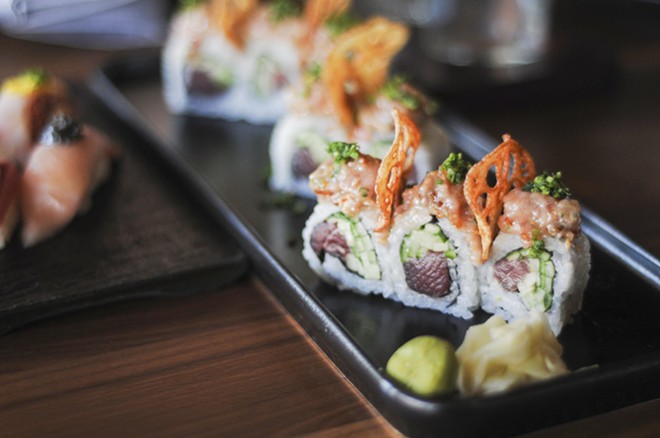 The Mangekyou roll also derives its name from an anime character and the word means “kaleidoscope”, which explains the Gaudi-like crispy lotus root wheels crowning the package. The lotus provides a crunch in a roll stuffed with leaner big eye tuna and cucumber, and topped with tartare made with the pieces of otoro tuna that couldn’t be used in other dishes. The tart and tangy ponzu delivers another bump of flavor.

Among the best plates was the hamachi kama, or grilled yellowtail tuna collar. It’s another that Vasquez brought from Momotaro and he says is a bit of a polarizing dish among customers and in the kitchen, though I fall on the side that loves it. The collar is a fatty, flavorful, slightly rich cut that’s pulled from behind the gills. The slightly smoky fish is partially blanketed with a pink and white checker-triangle of watermelon radish pickled in a fish stock that provides a dashi-umami component, and a sweet pickled daikon. Together, the pickles beautifully contrast the fish in color, texture, and flavor, and the sweet acidity cuts right through the glorious tuna fat. But the glory is in short supply — Tiger Lily goes through 10-15 hamachi weekly, and that’s how many collars it has to make the dish. 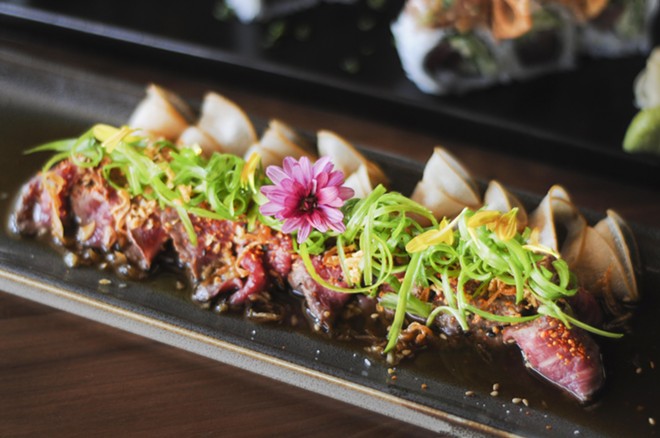 Vasquez’s beef tataki holds a little extra meaning to him because it's a riff on a dish he learned to make while cutting his teeth at an izakaya in Canton many years ago. The plate comes with raw spinalis, a cut near the spine that is heavily marbled, and extra toothsome and beefy. It’s complemented with asian pear, ginger ponzu, and fried garlic.

The aji nigiri, or horse mackerel, is a fishy fish with a strong flavor, so beware as it was a little much for us. It’s salt-cured and very quickly brined before arriving with mint oroshi daikon.

So many sushi restaurants are content with a yellowtail sashimi that’s simply the fish laid out with ponzu, Vasquez says, so he aimed to do more. His small folds of yellowtail tail are done with dried Japanese plum and shiso leaf that imparts a tart dimension. The fish is arranged with dollops of avocado mousse, soft dragon fruit seed cubes, and pickled watermelon radish along with the requisite puddle of ponzu. Mixing it all together into a bite creates a swirl of bright flavors and contrasting textures — sweet, tart, salty, sour, and more. It was a fine cap to the meal.

Tiger Lily serves the excellent Funaguchi sake, one of few metro Detroit restaurants to do so, but the way to go is the sake flights. The restaurant’s interior offers a clean, hip atmosphere, and there’s a “secret” tiki bar attached that one enters through a door inside Tiger Lily. The spot is a must-hit this winter.