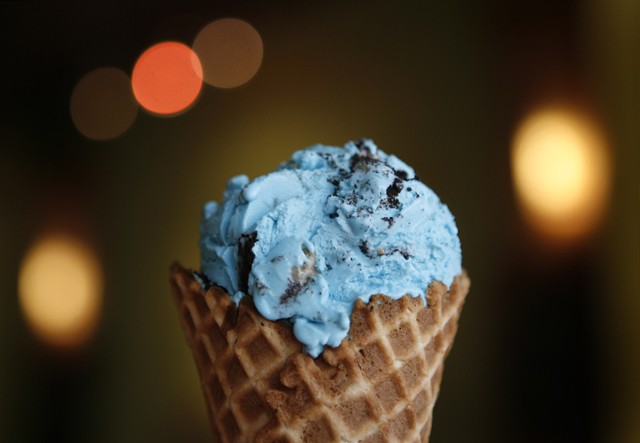 Scott Moloney is the Willy Wonka of ice cream. Read the flavor board in his six-month-old Ferndale bakery and micro-creamery and you might believe that you've somehow entered a fantasy world where anything can be made into a dairy-based dessert. Who knew that purple yam, potato chips, jalapeno peppers and chicken are all legitimate ice cream ingredients?

Many of Moloney's unconventional flavors are inspired by the "challenging" San Francisco ice cream shop, Humphry Slocombe. Though he has yet to make a prosciutto ice cream a la Humphry Slocombe, he is currently planning a brown sugar ham ice cream that acquires its flavor from the resulting broth of a ham bone steeped with clove. The ideas for flavors just keep coming. In the half-year that Treat Dreams has been open, Moloney reckons he has made about 110 flavors. He's got another 50 or so written down and an additional 30 to 40 based on customer requests. He clearly has an excess of built-up creativity from the nearly 20 years he spent in the drab finance industry before Treat Dreams became a reality.

Some flavors never even see the retail floor. For instance, a trial of salt and vinegar just wasn't quite right. But the energetic Moloney just keeps experimenting. Batch sizes of only 6 quarts allow him to have a failed flavor now and again. But it also makes it easier to concoct a flavor like chicken and waffles. Fashioned using an infusion from real chicken, along with paprika, garlic and black pepper, it's been well-received by the more daring patrons.

Not all the flavors are quite as zany as chicken and waffles. You're more likely to see flavors based on fruit and breakfast cereals than you are meat. The most successful flavors have been made with slightly more typical ingredients, like honey-lavender, which has its own cult following. Lemon-basil, spicy jalapeno, dark chocolate peanut butter curry, salty caramel, avocado-lime, bananas Foster, pistachio-wasabi, and a mixture of maple ice cream with bacon and waffles called "Sunday Breakfast" all have their admirers. A batch motivated by the candy Swedish Fish was sold out within three hours. Generally, Treat Dreams features about 14 ice creams daily, plus two to three lactose-free sorbets, two to three frozen yogurts, and one no-sugar-added option.

There's more than ice cream at Treat Dreams. For those that are looking for hot, savory eats, the shop offers soups and grilled cheese sandwiches. But Moloney isn't interested in expanding into a sandwich shop. Once the warm weather arrives, he plans on removing these items from the menu. He would like to offer food that's more in line with the spirit of an ice cream parlor, and is exploring the idea of selling tuna salad, pulled pork and similar, scoopable fare that can be eaten out of spiced and herbed waffle cones.

Treat Dreams also offers pre-made and custom ice cream cakes and pies. Baked goods include cupcakes, cookies, brownies, chocolate-covered cookie dough, chocolate-covered pretzels and other indulgences that are as pleasing to the eye as they are to the palate.

Treat Dreams has made several flavors either in collaboration with local business or merely using locally produced products. They have done flavors using beer from Royal Oak's Woodward Avenue Brewers. Ferndale's Pinwheel Bakery has supplied cinnamon rolls. Moloney apparently likes blueberries, as he has used both Mae's blueberry pancakes as well as Detroit's Dutch Girl blueberry donuts. He's done a chai and a jasmine ice cream with tea from Royal Oak's Goldfish Tea. There is a flavor with Irish cream and vodka planned to emulate a popular drink at Ferndale's Go Comedy. Moloney even hopes to perfect an ice cream using the hummus that he loves from Ferndale's Anita's Kitchen.

There are charity collaborations as well. To benefit Children's Leukemia Foundation of Michigan, Moloney had an 11-year-old patient design two ice cream flavors, and a 4-year-old patient design two cupcakes. A dollar was donated for each item sold. A Dragon Jade green tea flavor will launch on Earth Day this year to benefit Sierra Club. Small business owners such as Moloney, who are truly members of their community, are what Main Street America is all about.

Lacking a bona fide ice cream parlor ever since Frostbites closed after its short run, Ferndale was a commonsense location for Treat Dreams. Moloney says that the residents have wholly embraced it, and he sees more budding food aficionados coming in than he does children. Some folks just downright adore the place. Recently, a woman came in to chase away the day's injustices with a bit of red velvet cupcake ice cream and nearly broke down when she found out they were out of that particular flavor. It was nothing that a little pineapple-mango sorbet couldn't fix.