Update: Downtown Detroit's Park Bar to close at the end of the year 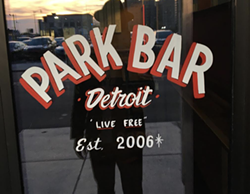 Downtown Detroit's Park Bar is closing at the end of December after 11 years in business.

Cliff Bell’s co-owner Paul Howard confirmed to Eater that he and his business partner Scott Lowell (who also co-owns the Traffic Jam) have purchased The Park Bar building. They take over on Jan. 1 and will close for roughly two weeks to complete some minor repairs and updates.
A post left on the Park's Facebook page promoting a "Last Call" party announced the news.


The rumors are true! The Park Bar has been sold and is closing at the end of December. We are having one last show to celebrate. Please join us Dec. 2nd. We have a great line up of the best musicians in the city. We want to thank all our loyal customers, employees and friends for your support over the last 11 years. We hope to see you. The bar will continue to be open various days through the end of December.

The bar opened in 2006 at the corner of Park and Elizabeth – long before opening a bar in downtown Detroit was the thing to do – and offered drink discounts to city of Detroit residents at the time. It's a favorite pre-soak spot for events at nearby Comerica Park, Fox Theater, The Fillmore, and other venues.

The Park Bar also holds the Elizabeth Theater, which is a small venue that largely caters to local acts. It was also the first home of Bucharest Grill, which was replaced last year by Gogo's, a Hawaiian food concept.

No reason was given for its closure. We've reached out for comment and will update the story with more information when we have it.