Detroit Eats: Katoi lives up to the hype

We review the food truck turned Thai hot-spot and learn about the art of sensual arousal. 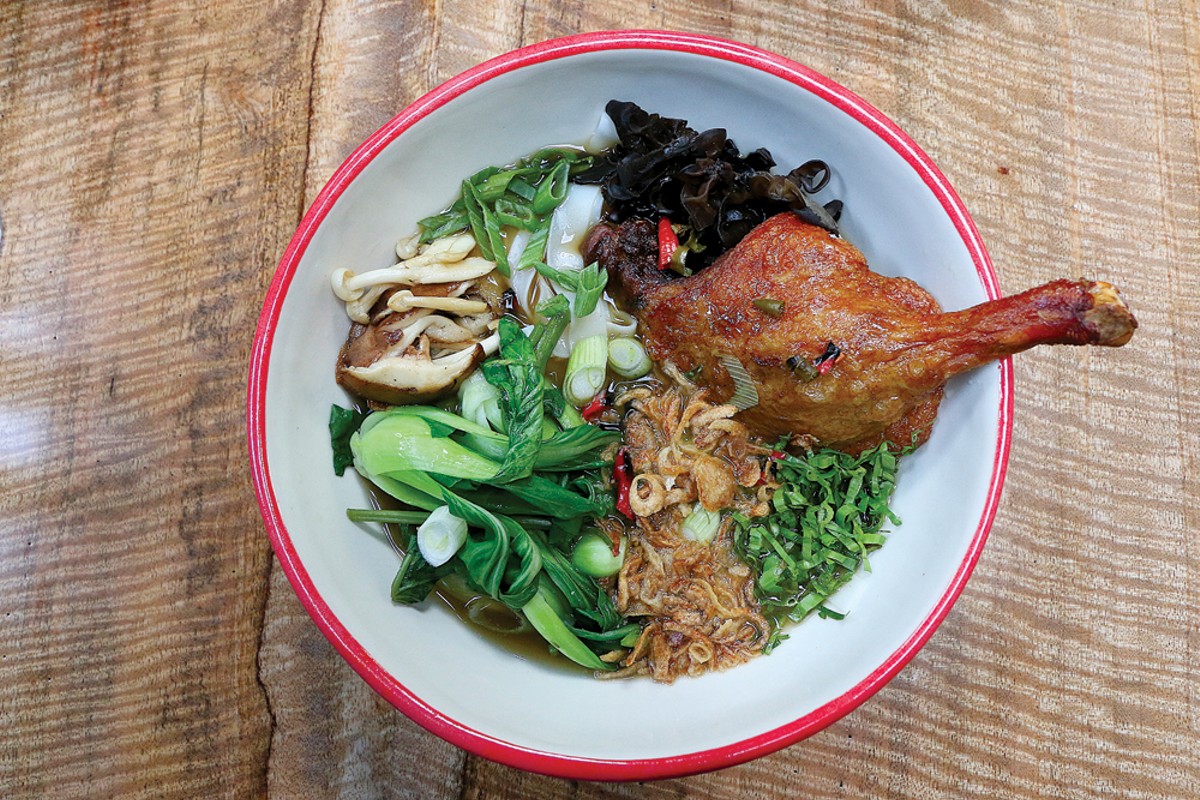 When a new restaurant hits the scene in Detroit, chances are the serious dining crowd has had it on its radar for months. The quality or concept doesn't seem to matter, we're hungry for something new, something to IG about, something to Snap to all our followers, something different to hype about until the next big thing rolls out. Rare is the case that our expectations are met. Too often, we walk away saying, well, that was ... new.

That's not the case at Katoi. A month after opening the hotly anticipated brick-and-mortar space, the northern Thai eatery has captured a cult-like fan base. More importantly than the buildup, though: This buzz is beyond deserved.

We've been keeping an eye on Katoi since 2014, when event coordinator Courtney Henriette and chef Brad Greenhill founded it as a food truck outside of Two James. The idea was born of kind of a dare, as little more than a means to dish out spicy street food to hungry drinkers and at Henriette's events. The crew was on to something, though, as the idea was a unique one in Detroit. The momentum caught the attention of Phil Kafka, who owned the old Willie's Garage across the street (as well as a billboard company, through which he posted a rather novel "help wanted" sign in New York). The team's journey evolved into a monthslong pop-up in Ann Arbor, while the former mechanic's shop was transformed into a restaurant. Without a clear roadmap, the crew managed to create something that Detroit has never really had before.

That something missing is a sensuality that's paramount in Thai eating traditions, something often lacking in Americanized versions of the cuisine. It's to be experienced on all levels: tactilely, as you use your hands to grab at a mound of sticky rice; visually, with bursts of color on the plate; through your nasal passages, as you get a whiff of fresh herbs; even through your neuroreceptors, when your brows starts to bead with sweat from the heat of a red chili pepper.

To achieve that sensory arousal, Greenhill draws upon the distinct northern section of Thailand. The region borders, and is heavily influenced by, Laos. Travel to Chiang Mai City, for example, and you'll rarely encounter coconut milk utilized at the many food stands, as would be more common in the south. Instead, the fare in the cooler, mostly mountainous north relies more on bitter and dried spices, and emphasizes pork, lots of deep-frying, veggies, and sticky rice. All these flavors fit in seamlessly with Detroiters' palates, so it's a wonder why it took so long for a place like Katoi to debut.

Add to that the way beverage director Drew Pompa's drink menu flirts with playful tiki concoctions and Thai teas and beers, a spectacularly edgy interior set inside the cinderblock building, and the hospitality skills executed by Henriette, and you're in for a next-level experience.

We were among the first batch of people to preview the menu during a series of soft openings in March. Right away, we were intoxicated by the natural light admitted by the skylights overhead, the abundance of tiny Buddha statues, neon lights, and exposed cinderblock walls. Almost every inch of the 1,900-square-foot eatery is used to squeeze in a capacity of about 90. A long communal table that seats a dozen sits in the center of the dining area and serves as the perfect spot to compare notes on the food with strangers. The walls are lined with brightly upholstered booths, and a narrow bar at the front packs in the rest.

Especially during the first few months, expect a wait on any given night. A host will punch your phone number into an app, and you'll receive a text when a table opens up. During our most recent visit, we heard a hostess quote at least a 45-minute wait to a couple of diners. With laser focus, we managed to sneak a lone barstool in the corner.

Onward to the food: Greenhill takes those northern Thai flavors and tweaks many of the dishes with a Midwestern sensibility. For example, the crispy spare ribs, lacquered in fish sauce caramel, apples, pickled papaya, Thai basil, and scallion, aren't anything you would find from a street food vendor in Thailand. Apples are uncommon in Asian culture and, well, so is caramel. Then again, when a neighboring diner offered to share one with us, we began salivating right away.

Several salad plates packed plenty of heat and complexity, as was the case for the stir-fried water spinach, seasoned with tamarind, ginger, Thai chili, and cashew. The thrice-cooked sweet potatoes, with a crisp finish, were sweetened with palm sugar, sherry, and given an herbaceous kick with sawtooth (sometimes known as long coriander). Also on the salad menu: naem khao tod, made up of crispy rice, pork, shallots, cilantro, and chili, gives you a balance of hot and sour with every bite. That tartness can also be found in the larb ped isaan — minced duck, chilies, shallots, lemongrass, sawtooth, mint, Kaffir lime, and toasted rice powder. For $3 extra, you'll be encouraged to add a side of sticky rice to most dishes.

As for the mains, the Chinese duck noodles are more than ample for splitting between two or three. The broth is loaded with intensity, thanks to a blend of wood ear, shiitake, bok choy, and five spice. And the "Crying Tiger" smoked brisket (smoked in a shipping container smoker attached to the building) gives us again that Asian flavor with a Midwest twist.

For dessert, you really can't go wrong with the coconut milk ice cream, with a drizzle of dulce de leche, peanuts, mango, and puffed rice.

For a concept conceived in utility and a desire to contribute something unique in the local landscape, we look forward to Katoi's continued growth and inspiration.