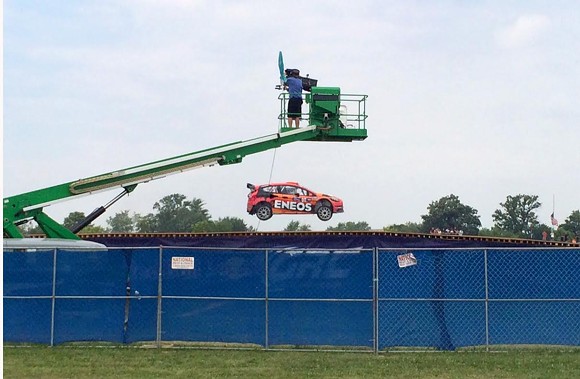 Photo by Tom Perkins
Nature at its best on Belle Isle.
The Michigan Department of Natural Resources' charge when it comes to taking care of Belle Isle couldn't be more clear. According to a DNR press release sent out last week, its role as steward of the island park is to "protect and preserve Belle Isle Park’s natural and cultural resources, and to provide access to land- and water-based public recreation and educational opportunities."

Yet each spring the Belle Isle Grand Prix turns Belle Isle into a protracted construction project that stretches between 80 and 120 days, with about three days of the IndyCar racing somewhere in there. During that span, residents are mostly barred from using half of the island. It seems to go directly against the DNR's goal of "access."

Should the Belle Isle Grand Prix continue to be a part of the island? And if it must, should the DNR, which controls the park per a lease from the city, require race owner and billionaire Roger Penske to set up and breakdown the race in a two-week timeframe — as is done other cities that hosts similar events?

And should the state continue to add more races and major events to the island's summer calendar, thus turning Belle Isle into more of a venue than a unique place to enjoy natural resources?

Those are the kind of questions one can weigh in on from 2 p.m. to 4 p.m or 6 p.m to 8 p.m. on Wednesday to discuss with the public the management and direction of the island over the next ten years.

Those who are unable to attend the meeting can fill out a short questionnaire online, which will be available through April 7 here.
According to the press release, a team from the DNR, the nonprofit Belle Isle Conservancy, and the State Historic Preservation Office working to develop the plan.

And now is a good time to talk to the DNR/Belle Isle Conservancy gang: The contract that gives Penske unlimited time to set up and take down his race expires in 2018, and he and the state are in the renegotiation process.

As we've noted in the past, the Belle Isle Grand Prix's set up and breakdown is the longest of any street race in the world at four months. Compare that to similar races in Toronto and St. Petersburg, Fla., which take two weeks, or the far more complex Monaco Grand Prix, which runs through tight city streets and is up and down in six weeks.

While the DNR is asking for input, it feels like a charade as the state agency and Belle Isle officials appear to be working for Penske, not the regular park users.

Last year, the DNR and Belle Isle officials hired a private firm to survey residents about how they felt about the having the Grand Prix on Belle Isle. But it was a phone interview with people who don't regularly use the park, and the PR firm only asked if residents were OK with the idea of holding the race on the island.

The survey didn't ask if park users were OK with being shut off the island for four months, or sitting in hour-long traffic jams to cross the bridge to get onto Belle Isle in the months leading up to the race.

Not that Belle Isle officials seem to care. Michele Hodges, the Belle Isle Conservancy president and chair of the Belle Isle Park Advisory Committee, which advises the DNR, has done nothing but praise Penske. (That's likely because the Grand Prix gala raises around $1 million annually for her group.)

"Conservancy president Michele Hodges says she wants 'to minimize the negatives' associated with the annual car race and 'maximize the positives' in her discussions with the DNR about its future. Though the Conservancy’s board of directors has taken no position yet on extending the contract, she maintains that 'the park cannot just rely on government funding' and that the conservancy’s 'philosophy is to work with corporate entities to identify financial and other resources' for the island. She adds that 'Roger Penske has been a good partner' and shares a desire to do what’s best for the island."

"At the June 16 meeting, (the DNR) 'expressed that money donated by Penske and others to rehabilitate the island should be better promoted' and said 'the message needs to get out about the many ways the race has brought in revenue to the island and the community."


Not encouraging for those who find Penske's use of the island to be an abuse.