‘White Boy Rick’ is launching his own cannabis brand 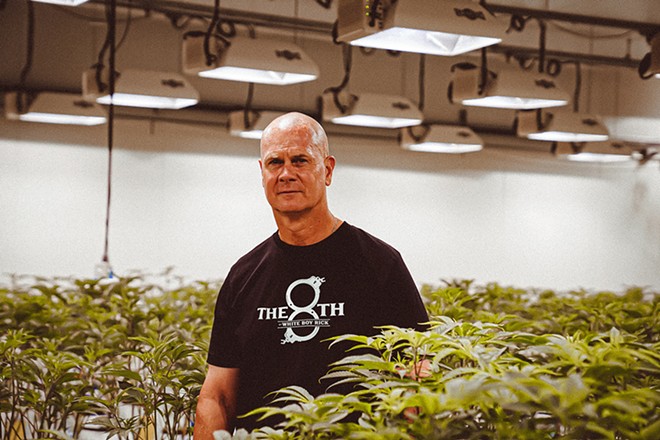 At 17 years old, Richard Wershe Jr., aka “White Boy Rick,” was sentenced to prison in 1987 for possessing cocaine — after the FBI had been using him as an informant to infiltrate drug gangs since he was only 14.

Last year, Wershe was released for good behavior after more than three decades behind bars, and he now finds himself in a new world where attitudes about drug possession are changing, including in Michigan, where marijuana has been legalized.

He’s calling his new brand “The 8th,” a double entendre that both refers to a standard measurement for pot but also to the Eighth Amendment to the U.S. Constitution, which prohibits “cruel and unusual” punishment. It’s a pointed reference to his own imprisonment, and those of many others.

“I had run into people in prison that were doing life sentences for marijuana, and now it’s legal,” Wershe tells Metro Times. “So doesn’t that tell you how crazy our drug laws are?”

Wershe has now made his life’s work fighting back against the war on drugs, which he calls “the biggest sham that has ever existed in America.” (He’s also suing the FBI and Detroit Police for $100 million, arguing that he never would have gotten involved with drugs if not for the agency recruiting him, which the lawsuit claims amounts to child abuse.) A portion of proceeds from The 8th will go toward releasing others who were wrongfully or excessively imprisoned for drug offenses.

For The 8th, Wershe is partnering with the Michigan-based Pleasantrees Cannabis Company to provide the flower, including a yet-to-be-revealed flagship strain. The brand will also sell items like concentrates, vape batteries, and merch like T-shirts and jackets. The partnership came together because Wershe says he liked their social equity plans, though other cannabis companies had approached him as well.

“One of the things that sold me about Pleasantrees was their criminal justice reform that they were already working on,” Wershe says. “So when they started talking to me, it was kind of like a hand fitting the glove perfectly.”

Wershe has become one of the most high-profile faces of the toll of the war on drugs — he’s set to be played by Eminem in an upcoming Starz series, and his life story was told in the 2018 eponymous biopic starring Matthew McConaughey. Not only is his the longest-serving sentence for a nonviolent juvenile in Michigan history, but he believes it could be in the entire world. “The research is done,” he says. “There’s no other country in the world that would give a juvenile life for a nonviolent drug offense. None.”

Wershe says he knows someone from Michigan who was incarcerated for possession of seven tons of cocaine. “He only received 11 years,” he says. “And nobody even knows his name.”

The wildly different ways that the U.S. prosecutes drug laws, Wershe says, is indicative of the widening chasm between the rich and poor in this country. “If you’re from the inner city, the odds are against you and you’re going to receive a much harsher sentence than someone that comes from a good family with a good attorney,” he says. “So there’s a lot of inequality and injustice in our world, and especially in the inner cities. I’m gonna be the rep for the inner cities.”

Jerome Crawford, the director of legal operations and social equity at Pleasantrees, says the partnership with Wershe was a good fit.

“For better or worse, Rick has become the poster child for what it means to be over-criminalized and prosecuted for drugs,” he says. “The war on drugs is really a war on people in impoverished communities, especially Black and brown communities.”

“One of the things that sold me about Pleasantrees was their criminal justice reform that they were already working on,” Wershe says. “So when they started talking to me, it was kind of like a hand fitting the glove perfectly.”

Wershe says The 8th will try to find others like him, and work toward getting them released from prison. “We’re going to find people that need help, and we’re going to help those people,” he says. “If we even help just two of them, that’s two more than anyone else.”

Beyond the partnership with Wershe, Crawford says the company’s social equity plans include creating opportunities for formerly incarcerated people by hiring them and helping them obtain an education, working on legislation and advocacy efforts, and funding initiatives to offer charity to less fortunate people in the communities it works in.

Despite his interest in the cannabis industry, Wershe says he doesn't use it himself. (He doesn’t even use alcohol, he says.) But he sees the benefits of cannabis, especially compared to how much safer it is than the addictive opioids doctors prescribe.

“If you really do your research, you see the good that cannabis does — when it stops a child from having seizures, when it gives a cancer patient an appetite,” he says. “You know what the insurance companies give them? They give them 10 different prescription pills, but they won’t give you cannabis. Cannabis helps them more than anything.”

Wershe says it’s unjust to send nonviolent drug offenders away for decades when offenders like rapists, child molesters, and drunk drivers get away with worse, for less. Big Pharma, he says, is the biggest offender of all. “There’s no rationale to call someone a ‘drug kingpin’ when the real drug kingpins are the pharmaceutical companies that created what’s going on in our country today [with the opioid crisis],” he says. “Since 1999, there have been 500,000 deaths and $26 billion in fines. $26 billion in fines, but not one person went to prison. But they’ll take kids from the inner city, they call us drug kingpins, and give us a life sentence. To me, pharmaceutical companies are cartels. They’re the cartels.”

He adds, “They don’t call pharmaceutical companies kingpins because they have lobbyists and politicians that donate money to them.”

Wershe says he spent his time behind bars getting educated about the war on drugs. When he was sentenced, the highest level of education he had obtained was eighth grade. Since then, he went on to get the GED and was able to take college courses. “I spent my time as wisely as I could,” he says. “I tried to take care of my health, you know, I tried to educate myself.”

Wershe believes as many as half of those who are incarcerated could be set free. “So why are we spending billions of dollars a year incarcerating them?” he says. “We spend over $40,000 a year on an inmate in Michigan. We can educate a kid at any college in the country for under $40,000 a year. Certainly, kids belong in school, not in prison. And if we educate someone, we get a return on our investment for society. If we don't educate them, sometimes what you get back is a far worse individual.”

Nevertheless, Wershe is hopeful that attitudes about the war on drugs are changing.

Beyond The 8th, Wershe is also working on a documentary film about his life. “It’s tentatively titled The Long Road Home,” he says. “It’s going to be my version of going through everything that I went through, and the long road it was to get my freedom back. And, you know, I’m still standing, and I’m in society, and I’m thriving, and I’m a positive productive member, after 33 years growing up in a cage.”

He adds, “I want to make sure that it never happens to anybody else. I can’t get the time that they took from me. I can’t go back and see my dad or my children grow up. I don’t get any of that back, there’s no do-over. To me, the way to do it is I have a platform, and I stand on that platform, and I do all that I can for those people. I call them the ‘Forgotten Ones,’ the people that are forgotten about.”

The 8th is expected to start selling its products in the fall, following a launch party in Detroit.