‘Shoot him in the head,’ white students exclaim as they aim water guns at a Black classmate 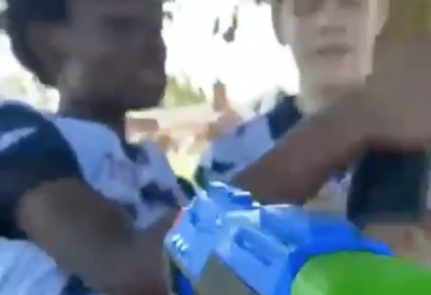 Instagram
White students point water guns at a Black classmate in a video posted on Instagram and TikTok.

A disturbing, racially offensive TikTok video that mocked the death of George Floyd has landed high school students in Sterling Heights in trouble.

The video, posted on Instagram and TikTok, begins with white ninth grade students at Adlai E. Stevenson High School laughing as they aim water guns at the head of a blindfolded Black student who is on his knees with his hands behind his back. A white student pushes the teen to the ground, and they pretend to kick him.

“Shoot him in the head!” they exclaim.

In the same video with a different setup, a white student aims a water gun at a Black student, and the teens yell several times, “Stop resisting.”

The students were at an off-campus football team breakfast.

The video caught the attention of Adlai E. Stevenson High School officials. In a statement to parents, Principal Kenneth L. Cucchi III says the video was inspired by a TikTok video “based on the tragic death of George Floyd.”

“The school is investigating this event to ensure that no other unacceptable behaviors have occurred in addition to this video,” Cucchi said. “Preliminary disciplinary actions have been taken and the ongoing investigation will determine final consequences.”

Cucchi said the school will use the video as a lesson to students about offensive social media posts.

“In a case where a diverse group of students involved make a poor choice — regardless if their stated intent was not to deliberately harm or antagonize others — the school will use it to help students understand why this is offensive and harmful to the social fabric of our community,” Cucchi said.

“There will continue to be discussion with the coaches and adults involved to ensure that there is appropriate supervision at sponsored and non-sponsored events that involve sports teams, other students, and the staff,” he added. “With the start of a new year, our coaches and various athletic teams will be discussing what it means to treat all individuals with respect and engage in responsible social media conduct. We want to reinforce that students need to think twice before filming or posting content.”

Discrimination is common at the high school, according to a petition started by a Black student who calls on Cucchi to take action.

“The amount of homophobia, transphobia, misogyny, and racism that is in Stevenson High school and the Utica Community School district in general is so terrifying,” the petition states. “As a minority in this school/district I feel extremely unsafe at a place that is supposed to make me feel safe everyday.”