Michigan GOP denigrated Muslims before courting them over ban on books

Republicans are hoping Dearborn forgets about their vitriol toward Islam 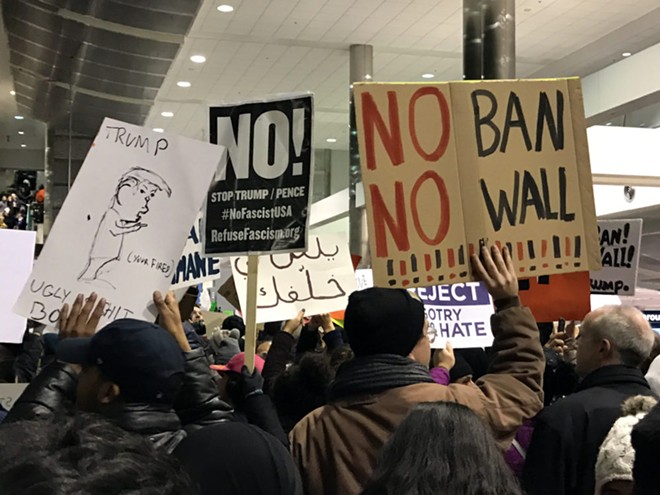 Steve Neavling
Muslims and their allies rallied at Detroit Metropolitan Airport against former President Donald Trump’s executive order that banned citizens from seven Muslim-majority countries from traveling to the U.S. in 2017.

Michigan Republican candidates and a large group of Muslims have found themselves on the same side of an issue — banning books in Dearborn.

Over the past month, the unlikely bedfellows have protested Dearborn Public Schools’ refusal to remove LGBTQ+ affirming books from libraries.

On Sunday, conservative Republicans and some Muslim advocates held a “Unite America” rally in Dearborn, a heavily Democratic city that conservatives have long neglected because of the heavy presence of Islam.

Some of the Republicans who gathered in Dearborn have a history of making Islamophobic remarks and surrounding themselves with anti-Muslim zealots. But that didn’t stop the far-right reactionaries from trying to score political points among Muslims ahead of the Nov. 8 election.

Karamo, a conspiracy theorist with a reputation for indulging in Christian nationalism, has described Islam as oppressive and violent. In a 2018 podcast, Karamo and a guest spent more than 50 minutes criticizing the Muslim Brotherhood and Muhammad, the founder of Islam whom Karamo called a sexual predator.

“Some of the things Muhammad did teach was it’s OK to rape. It’s OK to have a sex slave,” Karamo said. “People think many folks are just saying these things. It’s really true. He did teach that this type of behavior is permissible.”

In a video in 2018, Karamo said Islam is fundamentally violent.

“Oftentimes the media paints this picture that Islam is a peaceful religion,” Karamo said in a 2018 video. “You can survey Islamic countries and say that is not the case. Name one Islamic country where a religious minority and women aren’t persecuted. I’ll wait.”

Maddock and her husband, state Rep. Matt Maddock, R-Milford, also have a history of making anti-Muslim comments and speaking out against Muslim refugees.

In 2017, Meshawn Maddock bragged that she helped “support and promote” an “anti-sharia” rally in Southfield, where demonstrators spread misinformation about radical Islam taking hold in the U.S. The event was hosted by ACT for America, which claims Islamic law is incompatible with Western democracy. The Southern Poverty Law Center described ACT for America as an anti-Muslim hate group.

After a terrorist attack in France in 2015, Matt Maddock spread fear about Muslims in the U.S.

“It’s inevitable the same terror and mayhem will happen here,” Maddock wrote on Facebook. “It’s just a matter of time. They are already here. Pay close attention to how this plays out and their tactics. Tell (Gov. Rick) Snyder we don’t need any more Muslim refugees.”

The Dearborn rally on Sunday also featured Tamara D. Carlone, a fear-mongering conservative who is running for a seat on the Michigan State Board of Education. Carlone has repeatedly mocked the Islamic faith and called it anti-American.

In 2019, Carlone blasted training for public school teachers that was designed to dispel misinformation about Muslims.

“It is in the curriculum, the books, the teachers minds, and our kids will be lied to and told Christianity sucks and Islam rules,” Carlone wrote on Facebook.

“They are going after our innocent kids with young and developing minds on purpose,” Carlone added.

She shared demeaning memes of Muslims and falsely claimed that “We now Have a Muslim Government.” “ 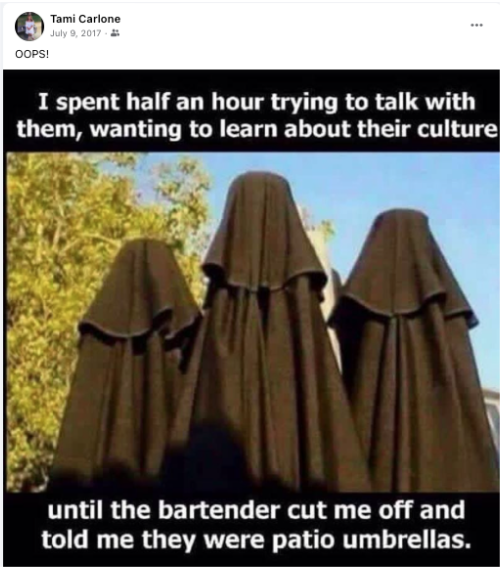 “Our nation and our government has been infiltrated by people who want to destroy us,” the Facebook post reads. “It WILL only get worse. Plus John Kerry’s son in law is an Iranian muslim. Had enough?"

Despite her anti-Muslim views, The Detroit News endorsed Carlone.

All of the Republicans are also devout supporters of former President Donald Trump, who proposed banning Muslims from entering the country.

But none of that rhetoric was present at recent protests in Dearborn, where Republicans and the Muslims they have ridiculed came together to fight what both groups have falsely called attempts to indoctrinate children with LGBTQ+ ideology.

Protesters held signs like, “Keep your dirty books in the closet” and "Whatever happened to the good old days?”

“Dearborn is a diverse and vibrant community where Muslim families thrive and lead,” Sam Inglot, deputy director of the Progress Michigan Political Action Fund, tells Metro Times. “Now, as part of a nationwide trend, right-wing extremist bad actors and Michigan Republican candidates are spreading disinformation in order to further their political agendas, despite spreading lies and fear about Islam for years.”

He adds, “Republicans are using Dearborn’s Muslim community to score political points, when in reality, they have no respect for those who practice Islam. The way Michigan Republicans have been twisting the truth for weeks to pit parents and teachers against each other is bad enough, but they have a history of denigrating the Muslim community. This display of two-faced politicking reminds us all how Republicans have no shame when it comes to using a community as political pawns, regardless of the damage they might cause.”