The move ‘smacks of more political cronyism and our residents are tired of the mayor’s term limit scams,’ the council secretary said 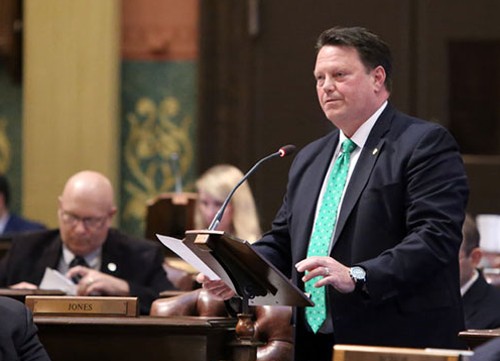 A city attorney appointed by Warren Mayor Jim Fouts is trying to remove the city council’s popular president and replace him with an ally of the mayor, setting the stage for a potential legal battle.

The attorney, Ethan Vinson, claims council President Patrick Green, who was the top vote-getter in November 2019, has reached his term limits under a charter amendment approved by residents in 2020.

In an email to the council, Vinson suggested that Gary Boike, whom the mayor endorsed in the previous election, should replace Green because he received “the highest number of votes of those who did not finish in the top two of the last council election,” as required by the charter.

“This letter smacks of more political cronyism and our residents are tired of the mayor’s term limit scams, which seem to never end,” Moore said in a statement Wednesday. “The mayor was just busted in a TV news report for using city employees to circulate a petition so he could have 5 terms in office. This is retribution against the Council President who spoke out against the use of city employees at political events during work hours.”

Jeffrey M. Schroder, an attorney for the city council, said Vinson’s letter is “politically convenient” and without merit. The charter allows a council member to serve “the greater of” three complete terms or 12 years.

While Green has been on the council for 12 years, he has not served three complete terms. Green served two complete terms from 2007 to 2015 and one incomplete term from 2015 to 2016, when he resigned to serve in the state House of Representatives.

“Since the charter allows an officer to server the greater of three complete terms or 12 years, he was eligible to be elected and serve a final complete term,” Schroder wrote to the council on Wednesday. “Mr. Vinson blatantly changed the facts by claiming that Mr. Green’s election to a new four-year term in 2019 amounts to serving the remaining portion of his incomplete term from 2015-2016.”

Schroder added that Vinson has no authority to remove Green and that “no action is required.”

This is not the first time that Vinson has been accused of making politically motivated decisions that are outside the law.

In April 2019, Vinson incorrectly declared that former Macomb County Commissioner Andrey Duzyj was ineligible to run for city clerk. After Duzyj filed a lawsuit, the Macomb County Circuit Court placed him back on the ballot.

In June 2019, the Michigan Supreme Court overruled Vinson and the Warren Election Commission by removing four city council members from the ballot for trying to serve their fourth complete terms in violation of term limits at the time.

In August 2020, Vinson fought to keep the term limit charter amendment off the ballot, but the Michigan Court of Appeals ordered it back on.

“Ethan Vinson is not a Judge and his opinions do not have the force of law,” Moore said. “Mr. Vinson is a genie in a bottle that tries to grant the Mayor’s wishes but he does not have the power.”