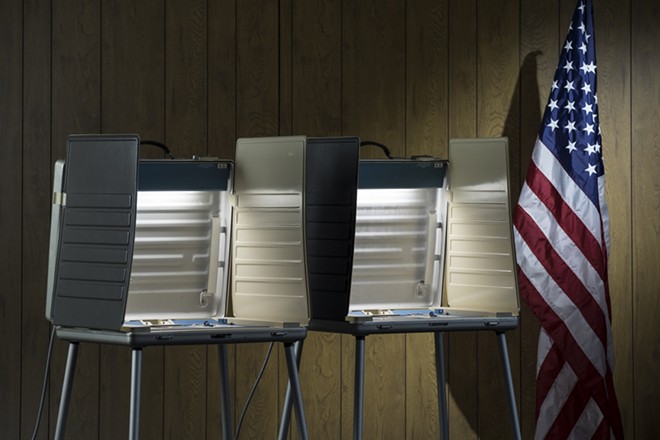 Shutterstock
A Michigan man is accused of tampering with the August primary election in Gaines Township in Kent County.

An election worker in Michigan has been charged with two felonies for allegedly using a flash drive to gain illegal access to a voting machine.

James Donald Holkeboer is accused of inserting a USB drive into a computer containing confidential voter registration during the Aug. 2 primary election in Gaines Township in Kent County.

"This incident is extremely egregious and incredibly alarming,” Kent County Clerk Lisa Posthumus Lyons said in a statement. “Not only is it a violation of Michigan law, but it is a violation of public trust and of the oath all election workers are required to take.”

He was charged with falsifying election records and using a computer to commit a crime.

It wasn’t immediately clear what Holkeboer was trying to achieve, but Lyons said the poll book is not connected to the internet or any tabulation equipment, so he did not impact the outcome of the election.

“The breach of the Electronic Poll book could not – and did not – allow any access to voting machines, ballots, or election results, and it could not have affected the outcome of the election itself," Lyons said. "The willful violation occurred after the files in the Electronic Poll Book were saved to the precinct’s authorized, encrypted system devices, and that system device was placed in a certified, sealed container, per standard procedure.”

Still, Lyons said she plans to conduct a post-election audit of the precinct where the tampering occurred “to reaffirm the results and reassure the voters.”

This is at least the second investigation into election tampering in Michigan.

On Thursday, Ingham County Clerk Barb Byrum said the latest case illustrates that people who tamper with elections will be caught.

“Please know that what you are being told to do, directed by election deniers and conspiracy believers, have real-world consequences,” Byrum tweeted. “Clerks are charged with executing safe and secure elections and that is exactly what we will do.” ;