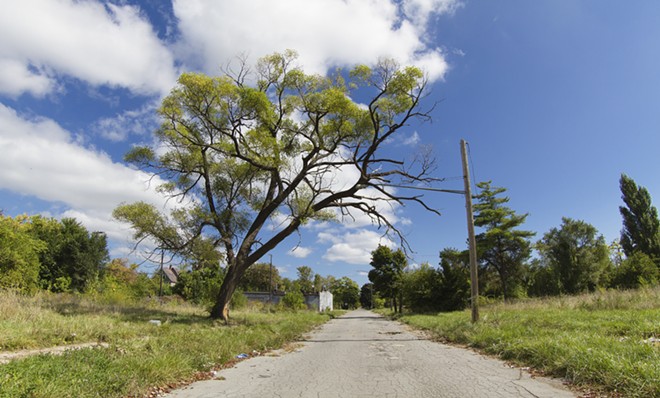 Steve Neavling
The area near the Coleman A. Young Municipal Airport is largely vacant on Detroit's east side.

Mayor Mike Duggan unveiled an ambitious plan Thursday to breathe life into Detroit’s long-floundering airport and attract new jobs to an area that has been largely abandoned for decades.

The Federal Aviation Administration approved the city’s first Airport Layout Plan in 30 years, potentially unlocking more than $100 million in federal funds over the next decade to transform the Coleman A. Young Municipal Airport and the area surrounding it.

Part of the plan is to build new hangars, taxiways, and a control tower to accommodate business travel.

“We’ve got private corporate planes that won’t land at the airport because they don’t think it’s safe enough,” Duggan said at a news conference at the airport. “We’re going to raise the safety standards.”

With vast areas of vacant space near the airport, the city hopes to sell the property to new businesses, which would have quick access to the airport.

“Detroit is running out of sites large enough to attract manufacturing facilities,” Duggan said. “We’re going to bring hundreds of jobs to the east side of Detroit at the same time we build a first-class airport.”

The neighborhood surrounding the airport is mostly vacant, with 17 occupied homes left. The city plans to relocate the remaining homeowners to make way for a safety buffer for aircraft.

As part of the plan, the city hopes the Detroit Public Schools Community District will revive the aviation high school at the airport. The Davis Aerospace Technical High School, named after Tuskegee Benjamin O. Davis Jr., the first Black general in the U.S. Air Force and commander of the Tuskegee Airmen, held its classes at the airport until the school’s emergency manager, Roy Roberts, relocated it to Golightly Career and Tech Center to save money in 2013.

The school has about 225 students.

“They can take their rightful place in this aviation community,” said Beverly Kindle-Walker, executive director of the Friends of Detroit City Airport. “It’s so vast in terms of career opportunities.”

“This was the premier airport in the Detroit area until 1947, when most went to Willow Run [Airport in Ypsilanti Township], followed by Detroit Metro Airport,” Detroit Councilman Coleman A. Young II said.

The airport, originally called Detroit City Airport, was named after Coleman A. Young, the city’s first Black mayor and a Tuskegee Airman, in 2003. He’s the father of the councilman with the same name.

For years, city officials flirted with closing down the airport.

“City Airport has been an underutilized asset and in decline for generations,” Duggan said. “Less than a decade ago, the city’s emergency manager had considered selling our airport to pay off some of the city’s debts. Thankfully, that didn’t happen and today, thanks to the great work of our airport leadership team and partnership with the FAA and MDOT, City is about to see new investment and new life as a center of opportunity.”

City officials had worked on the Airport Layout Plan for three years.

City Councilman Scott Benson said the airport will be “a destination for the region.”

“These improvements mean the airport will become more valuable to Detroit and the region, making it a greater asset now and for decades to come,” Benson said.