Detroit redevelopment projects get boost with $5.8M in brownfield grants 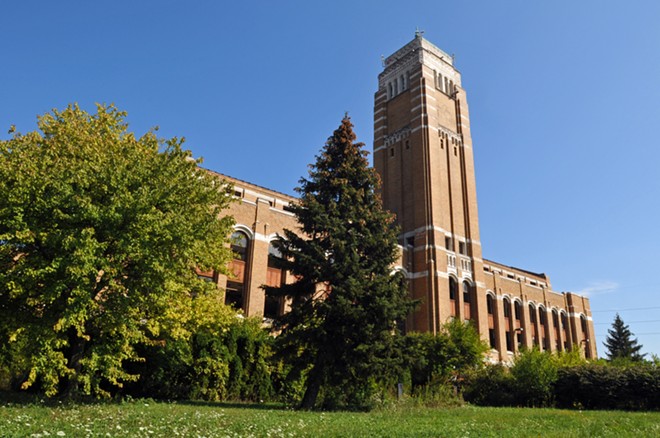 Shutterstock
The former American Motor Company (AMC) headquarters in Detroit is expected to be demolished to make way for a new manufacturing facility.

The city of Detroit received $5.8 million in brownfield funding to clean up contaminated sites to make way for new developments.

The projects include transforming the former American Motor Company (AMC) headquarters into a manufacturing facility and building two mixed-use buildings for housing and supportive services, an affordable housing complex, and a new American Indian community health and wellness complex.

Brownfield grants are used for the cleanup of abandoned properties where redevelopment is complicated due to toxic contamination.

Overall, the Michigan Department of Environment, Great Lakes, and Energy (EGLE) provided $20.7 million in brownfield funding to 67 projects statewide in 2022.

The soil is contaminated from years of manufacturing operations, leaking underground storage tanks, and debris that wasn’t removed by the previous owner.

The grant includes funding to install a ventilation system beneath the new manufacturing building to prevent potential exposure to residual contamination.

NorthPointe Development plans to demolish the blighted building and erect a large-scale manufacturing building. The $72 million development is expected to create 350 to 400 new jobs.

The DBRA will use a $1 million brownfield grant to remove and dispose of contaminated soil to make way for two new mixed-use buildings at 5800-5840 Michigan Ave. that will include 90 apartments.

“The DBRA is pleased to assist with this critical grant which will assist Southwest Housing Solutions Corporation transform an entire block of contaminated land that has sat vacant for decades into a new development that will provide much-needed deeply affordable housing,” DBRA Director Brian Vosburg said.

The soil was contaminated by previous uses as a vulcanizing operation, gasoline dispensing station, dry cleaner, photo shop, and greenhouse.

In the Piety Hill neighborhood, the city will use a $450,000 brownfield grant to address contamination and make several vacant and underutilized parcels safe for reuse.

The development has been complicated by metals and chlorinated compounds in the soil.

“The city of Detroit greatly appreciates the partnership with EGLE in providing $450,000 in cleanup funding for the Central Detroit Christian’s (CDC) affordable housing redevelopment, Piety Hill II; this funding will be used to prevent exposure to hazardous substances and address environmental conditions for a much-needed affordable housing redevelopment in the Piety Hill neighborhood,” said David Bell, director of the Detroit Buildings, Safety, Engineering, and Environmental Department (BSEED).

With the help of a $350,000 brownfield grant, American Indian Health and Family Services (AIHFS), a nonprofit organization, plans to build a new community health and wellness complex at 4559 and 4567 Wesson St.

BSEED will use the grant to address contamination and remove at least one underground storage tank. It also will install a ventilation system beneath the future building to prevent potential exposure to residual contamination, if the contamination can’t be removed.

“The city of Detroit greatly appreciates the partnership with EGLE who has provided $350,000 for cleanup funding for the New Facility for the American Indian Health and Family Services (AIHFS); this community-building project will help create a safer, healthier, cleaner Detroit and provide expanding services to the American Indian/Alaska Native community and other underserved individuals in the greater Detroit area,” Bell said.