‘A dark day for our country’: How the Jan. 6 insurrection has changed Michigan politics

The political divide in Michigan and beyond seems deeper than ever 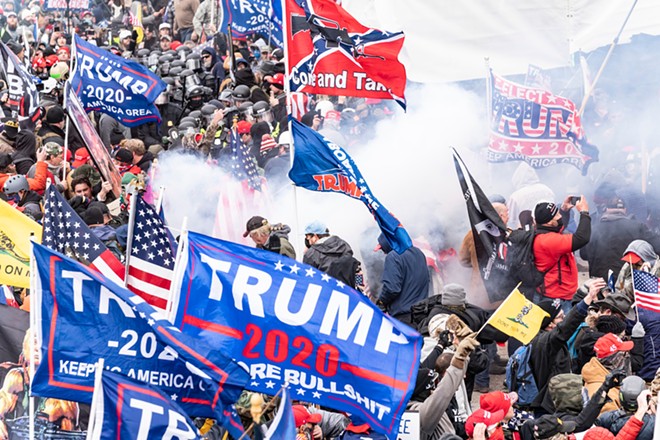 It has now been two years since baseless claims of election fraud incited an armed, far-right extremist mob to storm the U.S. Capitol, breaking into congressional chambers and ransacking offices in the name of keeping former President Donald Trump in office.

The events of Jan. 6, 2021, came as a violent result of pro-Trump election misinformation that has continued to permeate Republican politics — with the rhetoric taking over as the new GOP norm in some places, while causing intra-party division in others.

In any case, the political divide in Michigan and beyond seems deeper than ever.

The rhetoric that sparked the insurrection on the U.S. Capitol two years ago also sparked a wave of new, election-denying candidates running for office in Michigan and many other key states. Running to oppose Democrats Gov. Gretchen Whitmer, Attorney General Dana Nessel and Secretary of State Jocelyn Benson were Republicans Tudor Dixon, Matthew DePerno and Kristina Karamo, respectively. All pushed lies about the 2020 presidential election and promised to make policy changes accordingly if elected.

Ryan Kelley, a GOP candidate for governor who finished fourth in the August primary, participated in the 2021 insurrection at the U.S. Capitol and is currently facing charges.

A bevy of congressional and state House and Senate candidates who stoked doubt in election integrity also ran for Michigan office in 2020. 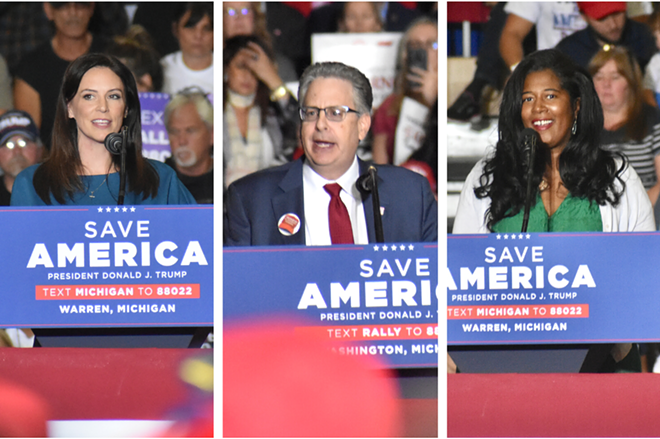 All three top GOP nominees lost, as well as a number of election deniers down the ballot. And although the fact remains that half of Michigan’s GOP state lawmakers are election deniers — and at least two, state Reps. Angela Rigas (R-Hastings) and Matt Maddock (R-Milford), were in D.C. on Jan. 6, 2021 — Democrats were able to win back power in the state House and Senate for the first time in decades, diminishing Republicans’ political influence greatly.

“It’s one thing to win a Republican primary; it’s another to win a general election,” Ramer said. He added that there were enough swing voters — “including a non-insignificant amount of Republican leaning-voters” — to rebuke many of the election deniers.

“They were just very poor candidates. They weren’t able to fundraise in any meaningful way in the general election that allowed for them to hit back on the abortion attacks or the election denialism,” he said.

“The Democrats and outside groups did a very good job of defining these Republicans as too extreme. The Dobbs decision [overturning Roe v. Wade] helped Democrats as a way to really define them, even though voters had these concerns over the economy, crime and inflation.”

Although the U.S. Congress at first failed to meet the moment in the insurrection’s aftermath, the work it accomplished in the past year has left American democracy in better shape than before, according to the nonpartisan, anti-authoritarianism nonprofit D.C.-based Protect Democracy.

Those accomplishments include reforming the 135-year-old Electoral Count Act to patch up vulnerabilities that Trump supporters attempted to exploit, as well as other advances that Protect Democracy says have furthered transparency, accountability and government efficiency.

But the threat has not passed, the nonprofit warns in a report released Wednesday.

“It remains eminently plausible that an authoritarian-minded candidate could return to the White House in two years. The next attack on our democracy may not be as dramatic as armed militia members crashing through windows at the Capitol, but it may be no less damaging,” the report reads.

“Congress, and the American people, should take the success stories of 2022 not as an opportunity to declare victory, but as a hopeful shift in trajectory — a reminder that progress is possible — and an example to build on in years ahead.”

But even with voters’ significant rebuke of election-denying Republican candidates on Nov. 8, Ramer says that many are still in power and causing political discord for both parties.

“There is a lot of dysfunction within the Republican Party,” Ramer said, pointing to the failure of the GOP majority in the U.S. House to elect a new speaker.

The chamber is currently at a standstill until a speaker is chosen; without one, members-elect cannot be sworn in and chamber rules cannot be set. This means that the U.S. House currently has no members nor the ability to advance any legislation.

House Minority Leader Kevin McCarthy (R-Calif.) was the favorite to become the next speaker, and received an endorsement for the position from Trump, but has since faced vehement backlash and opposition from some of the more hardline, election-denying GOP members including U.S. Reps. Lauren Boebert (R-Colo.) and Matt Gaetz (R-Fla.). Without their votes, McCarthy will continue to lose on ballots for speaker.

“There is a lot of dysfunction within the Republican Party.”

“The elected Republican members of Congress, a lot of them are still very Trumpy,” Ramer said. “They’re still very MAGA. A lot of them, even if they’re supporting Kevin McCarthy, wanted to overturn a free and fair election in 2020. And I think that overall that’s an indictment on the modern day Republican Party.”

The members that oppose McCarthy represent a “force that [Trump] unleashed on the Republican Party,” he continued.

This force has been a source of concern for election experts for years. The implication has been that, should enough election deniers gain power prior to 2024, the integrity of that presidential election could be compromised.

“I am relieved that Gretchen Whitmer, Jocelyn Benson [and] Dana Nessel easily won reelection and beat these election denying candidates,” Ramer said, adding that he is confident all three will “respect the results of a free and fair election.”

Benson on Friday will receive a Presidential Citizens Medal from Biden, who cited Benson’s and others’ “courage and selflessness during a moment of peril for our nation.”

Lawmakers and officials in top offices play roles in running or certifying the 2024 elections. Those who occupy the offices of governor, attorney general, secretary of state and congressional seats have significant power over election certification and outcomes.

Had more election deniers been able to fill those seats, the notion of having a free and fair election process could have been thrown into disarray.

“Before Nov. 8, I was deeply concerned with the possibility of these election deniers winning.”