"It's kind of like a Moorish-industrial feel," the venue's talent buyer Tom Pattyn says. 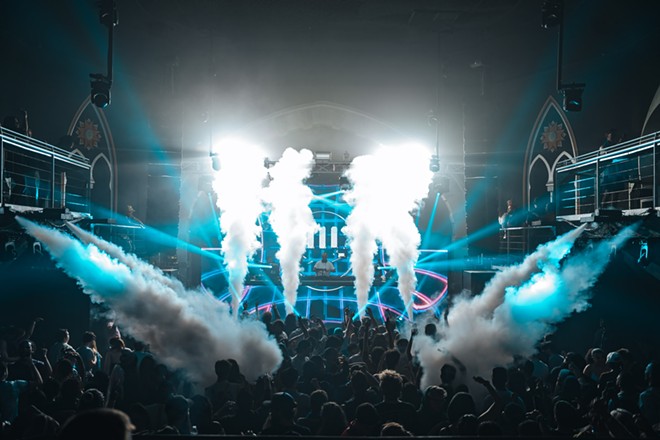 After closing down its main room for about a month starting in February, Pontiac's Elektricity nightclub reopened last weekend with some big changes.

Those include upgrades to its lighting systems, as well as its bathrooms and roof. But one of the most striking changes is a matter of subtraction, not addition.

Tom Pattyn, the club's talent buyer and marketer, says they removed panels put up during the building's previous incarnation as another nightclub, revealing ornate Moorish-style design elements, including arches and window treatments. The details date back to the building's origins as the Eagle Theatre, built nearly a century ago.

"It's a beautiful building," Pattyn says. "It's [got] this Moorish architecture, but a lot of it was hidden years ago when it was the Have a Nice Day Cafe. They kind of covered up the Moorish architecture with wood panels and painted them black, and used them as screens to show football games or whatever. So we took all that down, and kind of brought the building back to its original state." 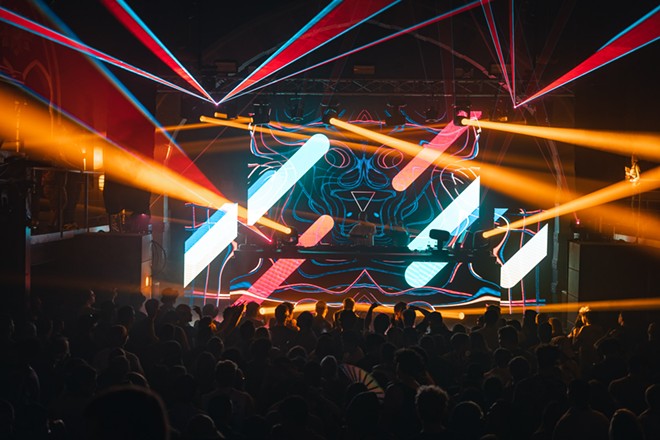 Other renovations include upgraded LED screens on the stage for electronic music artists to dazzle crowds with eye-catching visuals. The screens are larger than the previous ones, and use improved technology, Pattyn says.

"It's a lot of LED," he says. "Technology's advanced a lot over the last 11 years, obviously. It's just a lot cleaner, with a higher [resolution]. It's just night and day."

Pattyn says these days, it's common for touring DJs to bring their own visuals to play on screens while they perform. When they don't, Elektricty has in-house visuals that they use.

"It's a production," he says, adding that shows at Elekritcity typically also feature lasers, a confetti cannon, and cryogenics — or a blast of liquid nitrogen that blankets the dance floor in a white cloud.

The venue's bathrooms have also been completely redone with new stalls and tiles since the pandemic forced the venue to close in 2020, he says, and the building's plumbing and roof have also been upgraded.

The venue has also added an LED wall to the smaller upstairs "Mojo Room." Pattyn says in the warmer months, they'll bring projection mapping lighting to the building's outdoor walls for patio parties.

"We do it up with flowers, and kind of give it a tropical, summer vibe out there," he says.

The 1,100-capacity venue opened in 2011, as the electronic dance music craze exploded internationally.

Some of the venue's upcoming shows include an official Movement festival pre-party on Saturday, April 30 with Swedish DJ Eric Prydz, as well as appearances by acts like Adventure Club, Paul Oakenfold, Borgore, Kill The Noise, Eptic, ARMNHMR, The Widdler, Markus Schulz, and Ferry Corsten.

"It's predominantly electronic music," Pattyn says. "It ranges from the different genres, everything from techno to house to experimental, bass, trance, funk. We do a little bit of everything."