Indie rock band Habibi on the future, sisterhood, and ‘The Sopranos’ 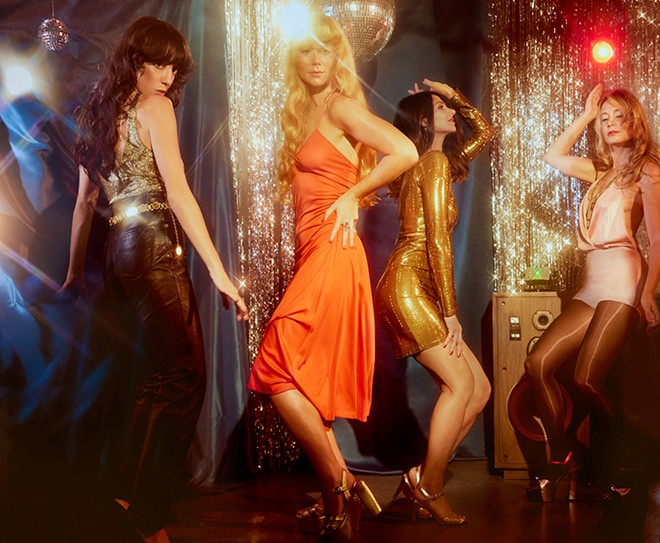 After nearly 11 years, Lenny Lynch says she finally feels as though Habibi is home — and there's no end in sight.

"I always feel like a Detroiter living in New York even though it's been 15-16 years," Lynch says. "It's never been exactly my home because it's just this transient place, you know?"

Lynch will return to what she refers to as her "Cheers" when Habibi performs at Detroit's UFO Factory, where the band had been scheduled to play, but had to cancel, just before March of last year. With them, Habibi will bring the record they never got to support in the city that brought them together, as well as a new pair of singles, "Somewhere They Can't Find Us" and "Call Our Own" — their first releases since signing to Kill Rock Stars.

The first couple of months into 2020, the Habibi sisterhood, which is completed by Ana Becker, Lyla Vander, and Yukary, was having what Lynch calls "a really dreamy time," and one of the "dreamiest" tours to date. The pre-pandemic jaunt was leading up to a moment the band and many Habibi fans had been waiting nearly six years for: a second full-length record. For Anywhere But Here, the follow up to the band's 2014 full-length self-titled debut which drew praise from outlets like NPR and the New Yorker, Lynch and company revisited songs they had been sitting on (including the album's closer, "Habibi,'' originally written in 2012). Together, they paired old songs with fresh ears, a 12-string guitar, ney flute, vibraphone, and sitar, and shrouded the sharp yet hazy collection in a confident, cohesive, cross-country road trippy malaise that calls to mind go-go boots, blurry snapshots taken out of manual car windows, and ephemeral feelings of displacement.

"Some things are not the things that last forever," Jamalifard sings on "Flowers". "Time never stops, she travels on in mystery/ sun follows slow on heels of stormy weather/ here shines a light/ it's comin' through the window."

"We finally got to Seattle, which was where the ground zero of COVID was and we had a KEXP show planned and they cancelled the live audience," Lynch says. "And we started to just get this eerie feeling each day as it was getting closer and closer to the end of our tour it was like, you know, dude, do we have COVID? What's up? Everybody feels sick because you just started hearing these news reports. It was paranoia," she says. "And we were about to hit the road to go to Detroit and play UFO Factory. And I had to be like, I'm so sorry. I don't know what's going on, but we have to cancel and we've never canceled a show to my knowledge."

As the music world, and many other industries, found themselves at a standstill, the band, realizing that they weren't going to be able to continue touring, used their time to focus. But the motivation to create was sparked by the fact that Kill Rock Stars label reps had come out to one of Habibi's last shows before the pandemic and had expressed interest in wanting to work together. Though the band found themselves somewhat separated in their respective lockdown locations, an EP was born from the DIY spirit from which Habibi was forged and from the desire to dance at a time where dance parties ceased to exist and the need for release was high.

"I think one of our last nights of tour, which probably was not safe in retrospect now that I think about it, after the show was over, a big dance party broke out," Lynch says. "I think that was my last time dancing before the pandemic."

The songs scream underground funk outfit (and one of Habibi's "hero bands") ESG, Studio 54 after-after parties, '80s dance clubs, and holding space for dance-based catharsis. But while the band longed for dance and play, New York was being ravaged by the deadly coronavirus set against the backdrop of months-long Black Lives Matter protests which had erupted when Minneapolis police killed George Floyd, an unarmed Black man, in May of 2020.

"There were constant sirens, constant sirens," Lynch says of last summer. "Endless fireworks, constant sirens. And the protests were all over the neighborhood. And here, you really are just stuck in your room with it. You know, feeling like you can't escape. So Paul [Quattrone of Thee Oh Sees] sent me some stuff. He was actually working on this Italian cop movie or something where he was like, 'Oh, this is these are some sirens and some beats.' And we were like, yeah, this works."

"Somewhere they can't find/ silence, up day and night/ It's been a year since I slept/ no one knows what to do/ Just keep holding to protect," Habibi harmonizes on "Somewhere They Can't Find Us."

Earlier this month, Habibi finally got to dance.

As part of a short run of shows in November, which will pick up in March with some West Coast dates, Habibi played a pair of shows at New York's Baby's All Right where they found themselves sharing a stage with The Sopranos' Michael Imperioli and his band Zopa because, yeah, in Habibi's world, anything can happen.

"I feel bad talking about it because it was so packed that I just stayed in the back room because I was scared at how packed it was," Lynch says. "But it was super wild and my 3-year-old niece was there and like, you're in the green room with Michael Imperioli and all of these people from The Sopranos. OK, I don't really know exactly who all was there, but I definitely know Artie who owns the restaurant [Nuovo Vesuvio], I can't remember his actor's name. But I've always wanted to meet him. He was there but I couldn't find him," she says. "It was a very funny juxtaposition of everything. It was like old mob guys, Habibi, like all of our families came to that show, then there was this young all-female punk band, so just a total New York night."

With more than a decade of Habibi under their belts, Lynch says there's no plans to stop. Though, Lynch says, people consume music differently, adding it takes time for people to discover music by anyone other than, like, Taylor Swift, she feels Habibi finally has their footing, a supportive label, and the fearlessness to take on a country record.

"I mean, this is something I really care about," Lynch says. "What's also great too, is that our music, because of the different directions that we've taken, has not been pigeonholed. Next year, we're like, oh, we could work on an electronic record, then let's do country stuff. It's kind of limitless. And especially when you're having fun working with people that you consider family right now especially, I mean, all the girls in the band, I care so deeply about them, they're all my fam. So that makes it really fun," she says. "You don't want to just give up on it."