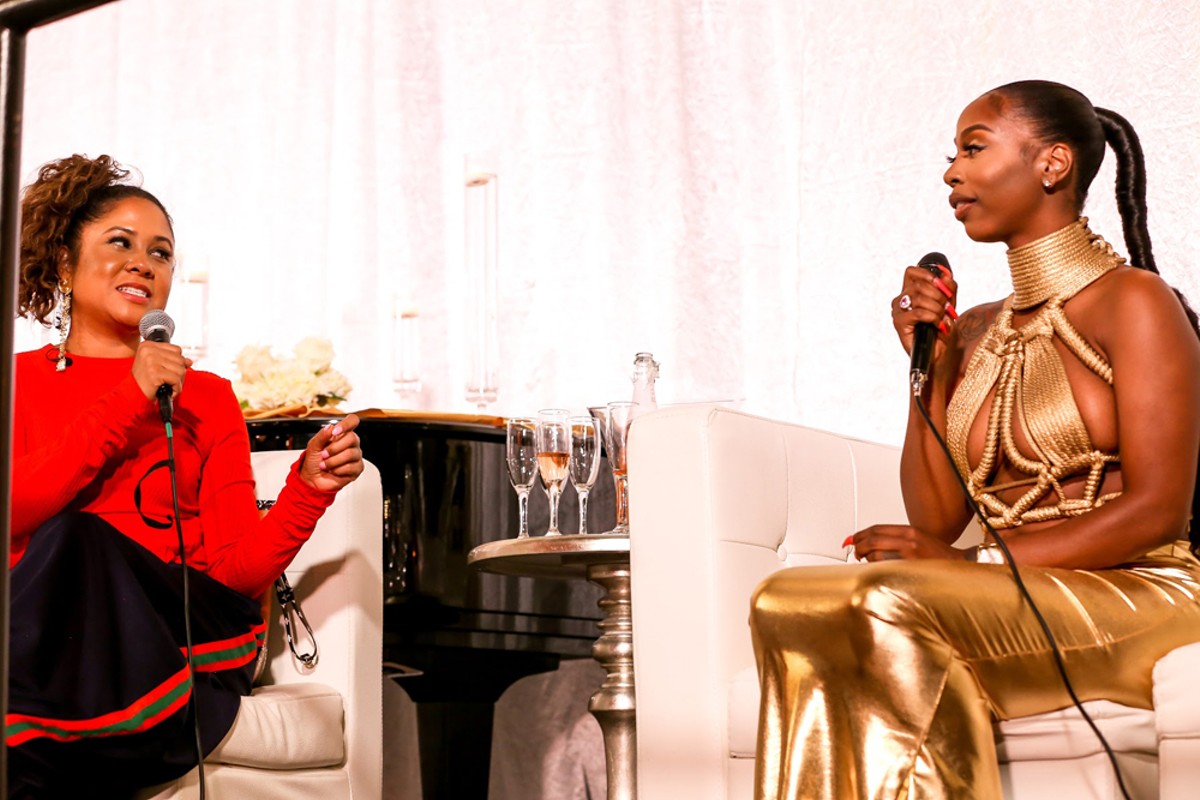 Earlier this month, friends and family of Detroit rapper Kash Doll gathered at Novi's Taipei 101 for a private album listening party ahead of the release of her new record, Stacked, which dropped Oct. 18 on Republic Records. Local hip-hop and R&B artists like Neisha Neshae, Rocky Badd, Sino, Lana Ladonna, and others joined the celebration, and The Breakfast Club's Angela Yee was even on hand to moderate the event and interview Kash Doll live.

"This is history," Yee said. "You guys don't understand how much time it takes for Kash Doll to get to the point where she is."

With Stacked, Kash Doll, who performs in Kalamazoo on Friday, has reached a major landmark in her career. Born Arkeisha Knight, Kash Doll started her music career in 2013 when she first started rapping. A year later, her buzz began to quickly build as her remix of Tinashe's summer smash "2 On" took Detroit radio by storm. Although Kash's career in music began accelerating forward, label troubles caused the promising rapper to push pause on her progression.

Due to a past legal battle with her former label BMB Records, Kash Doll was barred from sharing original music on streaming platforms. But Kash Doll's fans understand that the release of her debut album represents her victory in the legal battle, which makes the release of Stacked even more special. Stacked follows the release of four mixtapes and EPs, with the latest, The Vault, being released in July 2018.

In the video, which dropped in August, Kash Doll and Big Sean race cars on a track that Kash Doll says she rented out herself.

"Being from Dexter and Joy Road, I feel like ["Ready Set"] shows people that what you go through doesn't determine where you're going," Kash Doll tells Metro Times. "I feel like it gives them some inspiration. We all the way in Cali with it now! We don't have to just be in the D because we from the D. I want [the video] to inspire others to travel more, to know that there's more to life, to just live and be happy, you know? We were just having fun. We were betting on who would win the race just for fun. I feel like you can pull a lot out of this video."

In recent years, an influx of female rappers have entered the industry. This past year alone has been phenomenal for women rap acts, from Nicki Minaj's crowning achievement of being the first femcee to sell over 100 million RIAA units to the Bay Area's Saweetie becoming the seventh femcee on Billboard's Hot 100, women in hip-hop are on the rise. Even though competition among femcees is stronger than ever now, Kash Doll has still managed to insert herself into the top tier of ladies in the lane today. Alongside fellow rappers Cardi B, Megan Thee Stallion, Lizzo, and City Girls, Kash Doll's movement is knocking doors down in the male-dominated industry.

"We are demanding it. Period," Kash Doll says. "There's more girls, so no one is scared to do [hip-hop] anymore. At first, it seemed people were scared that [female rappers] wouldn't do well or whatever, but I just feel like now we're demanding it."

"I want to rap, so I'm going to rap," she says. "Either you take it or leave it and not everyone was embracing that. I'm glad more people are embracing it now, but I feel like they don't have a choice."

The progress Kash Doll has made over the past year is clear through the music and visuals she has dropped and appeared in. "Ice Me Out" was one of the first singles from Stacked to receive the visual treatment, and it was a clear indication that KD was evolving as an artist. The video, which dropped in November 2018, did not disappoint as the ice princess displayed flawless looks while spitting bars in her smooth and subtle style. Following her album release, Kash shared the heartfelt visual for "KD Diary," which finds the femcee telling her story with revealing lyrics and an insane beat drop. Through her journey, Kash has proven that she is capable of taking her artistry to the next level.

Kash Doll said she hopes Stacked will be much more than an album for the moment.

"I don't want to have that music that you put out, it's hot for a summer, and then it's gone," she said. "I want music that you hear and think, 'Damn, I can relate to this.' You get mad at your man, you turn on this song. You love your man, you turn on this song. When you're going through something personal in your life or when your mom pisses you off, you can turn this song on. I want to have the type of music that, regardless of the situation, you can turn on Kash Doll and be like, 'Damn, this made me feel better.'"

"I want my music to be forever."