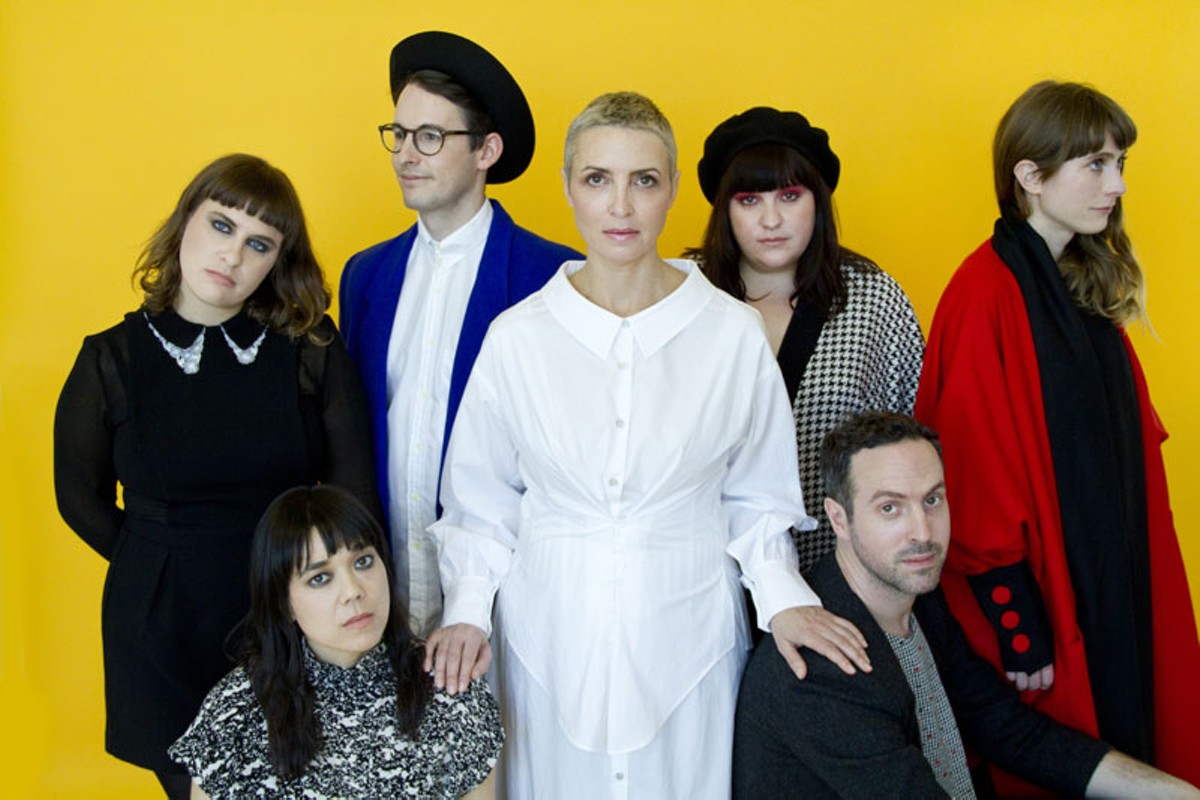 When most people are 2, they finger paint. When Brooklyn-born Chandra Oppenheim was 2, she was enlisted to participate in the conceptual work of her father, famed artist Dennis Oppenheim.

The piece was called "Color Application for Chandra" and it involved a parrot teaching Chandra color names. Her father taught the parrot the names, which it would then teach to Chandra; she distinctly remembers learning the word yellow from this parrot.

Participating in an art piece when you yourself can barely speak and the co-star is a parrot is quite an auspicious beginning. It's little wonder that in 1980, Chandra would come to find herself fronting a no wave/art punk/outsider-disco band at the tender age of 12 in New York's pulsing underground music scene.

In the 10 years that passed between her earliest exposure to art and the formation of the band, she developed a keen ability to acutely express the absurdity and anxiety of everyday life, without necessarily intending to.

She honed this ability through performance art as well as songwriting: At age 7, she and a friend were booked to open for Laurie Anderson, avant-garde artist (and future wife of Lou Reed).Well, almost. It was to take place at a little performance art space in Manhattan's Tribeca neighborhood, but Anderson canceled at the last minute. Some people, upon hearing Anderson wouldn't be performing, got up to walk away, but oddly enough, the vast majority of the audience stayed put.

"We had their full attention," Chandra says. The show was a series of skits she had created over the course of one summer. One involved a private detective with a split personality whose other personality had committed the crime; another involved two large city trash cans set up at either end of the stage. Chandra and her friend took turns walking across the stage and throwing things into these big metal cans, starting with hot dog wrappers and progressing to expensive items like her father's camera. The piece culminated with the girls throwing baby dolls, into the garbage: "That was 7-year-old Chandra!"

Her lyrics had a similarly strange, dark vibe. An early song was about crawling around for help after jumping out of a window, while the few recorded songs cover everything from adolescent jealousy ("Kate": "You're too weak/ You're so sweet/ You're too good for us") to getting lost on public transportation ("Subways": "The train keeps on going/ It just won't stop/ You get real scared 'cause you can't figure it out").

"I was definitely influenced by the way my father thought about life and art. I think I picked it up through osmosis," Chandra says. "I didn't think about it, it's just where my brain would naturally go to express myself. I was thinking about the rhythm of the words, or playing around with how they sounded together."

This poetic bent is also evident in the way that Chandra's vocals are chants rather than croons, hypnotic and disorienting while maintaining a potent innocence.

But the band itself was not Chandra's idea. She benefited from the seasoned musicality of two players in the New York scene: Eugenie Diserio and Steve Alexander, friends of her father's. First they were members of early '80s no wave band Model Citizens (with which they released an EP produced by John Cale), then they spun off into a similarly styled group called the Dance. The two were looking for an additional project. Enter Chandra, stage right.

"They were hanging out with my dad and it came up," she says. "Somehow, someone said, 'Well, what about Chandra? Would she want to do a band with us?'" The answer to that question was a resounding yes. After a successful initial rehearsal, the group began regularly practicing. They would do so for a good part of the year before finally playing their first show at the Mudd Club — which Chandra remembers well for two reasons. One, she was quite nervous. Two, the DJ did something marvelous: "Right before I went on, they played [the Jackson 5's] 'ABC' and I just thought that was very clever, funny, and sweet."

This incarnation of the band only lasted a year, but that was enough time to play a short but well-received tour and record the songs that would make up the original Transportation EP, released on the Dance's own label, GoGo/On.

The group then morphed into the Chandra Dimension, with a similar focus but filled out by members in Chandra's peer group, though Diserio and Alexander remained as musical mentors and producers. It was fun for Chandra to play with kids her own age, but this band was just as short-lived. They recorded a handful of songs which never saw the light of day until 2008 when Cantor Records released the first reissue, which brought Chandra's mesmerizing mutant disco sound to wider audiences — or at least record nerds — for the first time.

It came down to a choice for Chandra, a seemingly self-imposed one at that: the band or school. She was already bringing her homework to rehearsals, and the younger musicians simply weren't as tight, less able to channel the funkiness that gives this kind of music its discordant danceability. School it was, thus putting an end to her unlikely childhood stardom.

Since then, Chandra, who now lives in Portland, Maine, has spent her life in and out of music and art, though she will always be remembered for the enchantingly odd songs of her youth.

Two recent projects of note include an elaborate performance piece called "A Slightly Better Idea" that combined photography, a live band, stage sets, choreography, and costumes — and was performed exactly once; and the Young Songwriters Project's double album World of My Dreams. This consists of songs written by Chandra's songwriting students, ages 5 to 11 — one of which is her own daughter, Issa. When the schedule allows (unfortunately not in Detroit), Issa sometimes joins Chandra on stage to sing Transportation songs, which has a delightfully disconcerting effect as Issa looks just like her mother at age 10.

Transportation was freshly reissued late last year, this time by Telephone Explosion and Rain Boots Records, now with two more previously unreleased Chandra Dimension songs. It is this that brings her to Detroit — for the first time ever. Her backing band these days is a Toronto-based group featuring members of Bile Sister, Tough Age, New Chance, and Blonde Elvis; drummer Jesse Locke is a major reason that this particular group exists as it does.

In 2014, Chandra wanted to do a second run of the Cantor reissue; label head Aaron Levin reached out to Locke to spearhead that effort. "We got caught up in the excitement and asked Chandra to come to Toronto to play and perform a few songs for a release party," Locke says. This was such a fun experience they decided to learn the whole album. Now, here they are.

"I'm just trying to channel [the music] and do it justice," Locke says. "We're doing new arrangements of the songs in some ways, but also trying to keep the spirit alive of the weird, abrasive, dissonant grooves with pop hooks."

When asked what her favorite of her own songs is, Chandra notes that it's hard to pick, but mentions "Get It Out of Your System," which brings the entire Transportation experience full circle. "I've always liked it. But now, singing these songs decades after I wrote them, it's about stepping through a time warp, thinking about the passage of time over a lifetime," she says. "It seems like a premonition to me."