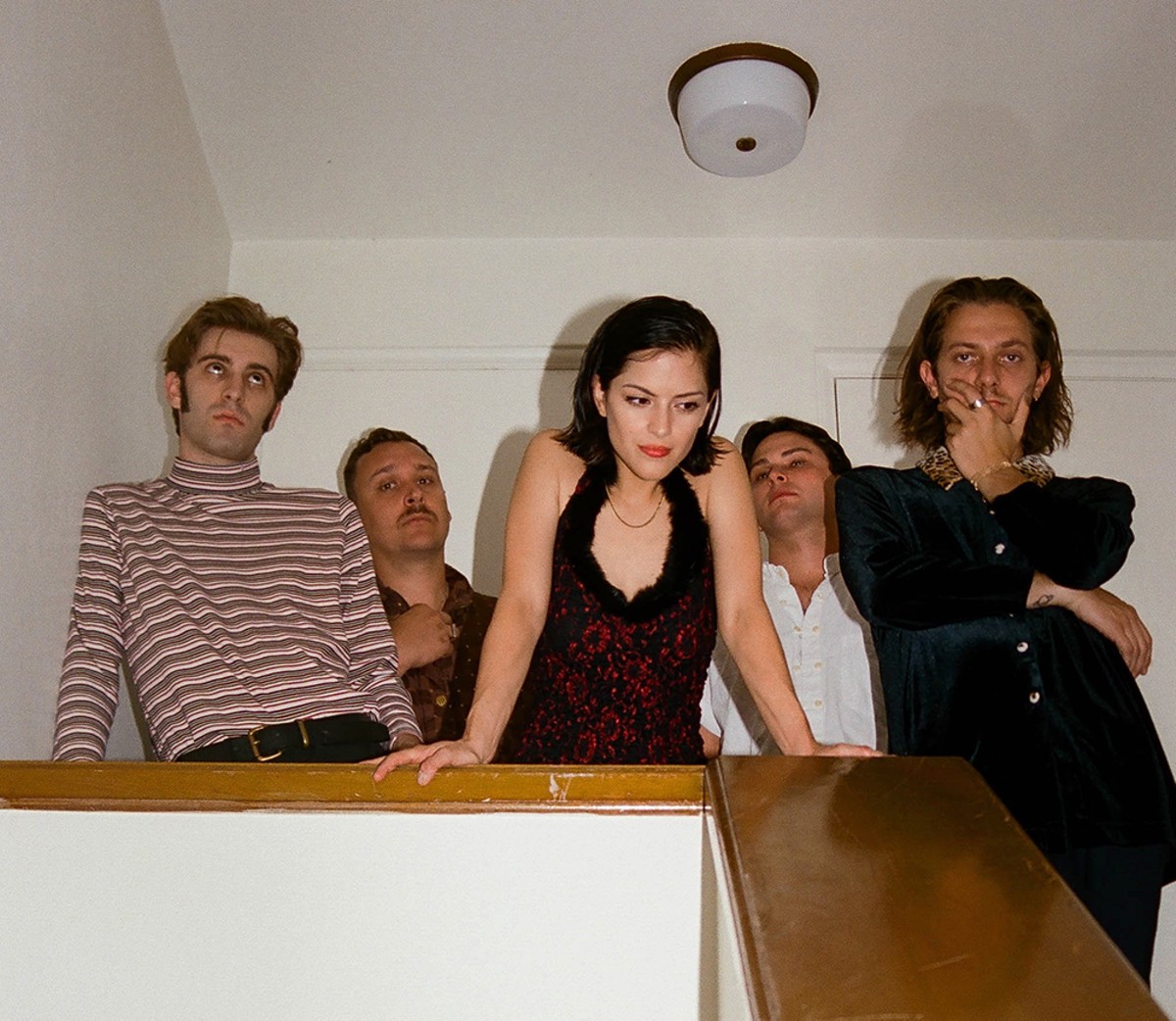 L.A.-based psych-pop band the Marías seems to live life inside of an old Hollywood movie — everything about the band's story seems like it could have been perfectly orchestrated by a cinematic for an A Star Is Born- blockbuster hit. But for lead singer and guitarist María, who just goes by her first name, this is just real life.

Just two and a half years ago, María was studying film in Atlanta, receiving frequent from a good friend in Los Angeles who was also pursuing music. "She convinced me to move out to L.A.," she says. "She said it was the place you had to be if you wanted to pursue music... I think it's better than I thought it would be, for sure. I think a lot of people give L.A a bad rap."

However, not every L.A. hopeful has the chance encounter of meeting a romantic and creative partner within a few months of moving there. María did. Just a couple months after packing up her car and driving west, María crossed paths with Josh Conway at a Laurel Canyon Music Revival series. Conway was doing sound for the event and María was performing an acoustic set with her friend Josiah Fleming. Conway was immediately drawn to María and invited her to record at his studio, which marked the beginning of the pair's dynamic partnership.

Though María says her and Conway had different formative musical influences — Conway gravitating toward rock bands like Tame Impala and the Strokes and to the jazz-infused R&B of Erykah Badu — their different styles come together to create a smooth blend of dream pop. Shortly after meeting, they formed a band with a few close friends — Carter Lee (bass, vocals), Jesse Perlman (lead guitar, vocals), and Edward James (keys, vocals) — and released their first EP, Superclean Vol. 1. The group's debut into the indie-pop world captured millions of listeners and brought them opportunities that María says the group hadn't dreamed of.

"The response that it got was really cool and nothing that we expected," says María. "We didn't expect to be going on tour with [the Strokes'] Albert Hammond Jr. the beginning of this year or playing Coachella or anything like that with just one EP."

Whether or not they expected it, the band seemed more than equipped for their time in the spotlight, with a series of romantically shot videos drenched in an Old Hollywood glamour and nostalgia. The vintage feel of the Marías' videos likely partially stems from María's infatuation with Spanish director Pedro Almodovar, who María says she felt drawn to in part because her Spanish father was a fan of the director, but also because of his tendency to focus on a female protagonist. "He's been around forever but I feel like he's one of the first filmmakers that I know of that had feminist undertones," says María. "I think that's really cool."

Much like a star in one of Almodovar's films, María serves as the aesthetic and musical centerpiece of the band, commanding each performance and video with her subtle sensuality and hypnotizing vocals. Whether she's singing in English or Spanish, her voice has the ability to captivate and connect with listeners. "We played a festival in Indonesia a couple months ago, and the audience hardly spoke English, let alone Spanish," says María, "and they were singing along to the Spanish songs."

She stresses that incorporating her Spanish and Puerto Rican culture into her music is essential. "It's really important to me to portray that heritage and have songs in Spanish because it's a part of who I am," María says.

One doesn't have to understand Spanish to be transported into a lovesick joyride while listening to "Cariño" or a secret getaway soundtracked by "Dejate Llevar." María's performance is no less cinematic when performing live, oozing class and creating a world of her own. The young starlet is living inside her own daydream and can make it feel — even if only for a few minutes — that you are too.