A sprawling conversation with Anton Newcombe of the Brian Jonestown Massacre 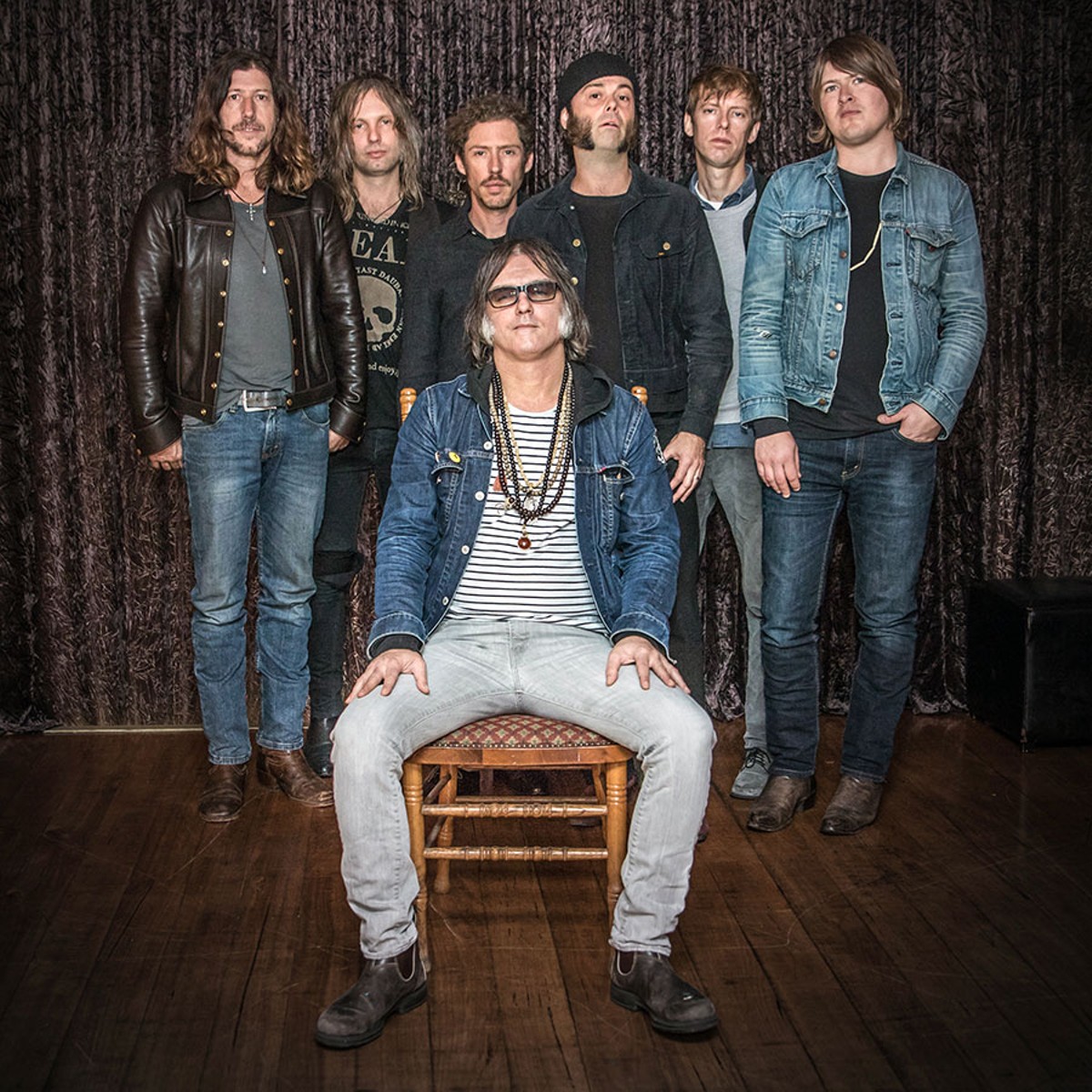 On the surface, Anton Newcombe fulfills the rock 'n' roll frontman archetype of being a feral, ticking time bomb of creativity. But when it comes to Newcombe's beloved neo-psychedelia cult rock outfit, the Brian Jonestown Massacre, the singer has little interest in the rock-god trope. In fact, he'd rather discuss Russian history, his son's TV habits, and why self-sabotage has been the conscious move following his success as an underground prophet (a title that is also of no importance to him).

As it turns out, time has been kind to Newcombe, whose unstable reputation was cemented in the 2004 documentary Dig!, as director Ondi Timoner spent seven years tracking the rise, fall, and dueling self-delusionary paths of the Brian Jonestown Massacre and fellow '90s West Coast revivalists the Dandy Warhols. ("You fuckin' broke my sitar, motherfucker," Newcombe famously growls in one of the films depictions of the band's many meltdowns.)

What Newcombe has accomplished is impressive — especially if you consider that he is proficient in 80 instruments and is capable of single-handedly recording an entire album in a 24-hour period.

This year will see the release of Something Else, BJM's 18th record in 23 years. At 50 years old, Newcombe's voice is not gruff, nor sharp, and he does not stutter or stop between sentences. Unlike other interview subjects, Newcombe has no trouble with opening up. Every question, topic, or inflection can trigger a long-winded labyrinthian analysis — even when asked about something as simple as Mexican food. Far from incoherent, Newcombe is an impassioned conversationalist who has nothing to prove and everything to say.

Anton Newcombe: There's a lot of things in America that are a shame for me. One thing for me is I would prefer, for everybody else's sake, that society was progressive. I'm talking about progressive politics like cleaning up the water and creating jobs by creating a new society where hopefully you have more efficient houses and machines and businesses and transportation and infrastructure and all that good stuff.

MT: As Brian Jonestown Massacre you've released 17 records, and I'm sure there are heaping amounts of unreleased material that we may never hear. What is the source of your discipline?

Newcombe: I love playing music. I have a recording studio, so it's an infinite process of learning, when I make an idea of teaching myself how that song is every time. It's infinitely fascinating to me as a Zen process I can share. It's just like [Reginald] Arkell out in the garden, cross-breeding begonias or whatever. It is endless because they like it, not particularly because they want to have a nursery or enter them in the county fair. It's just something that I enjoy doing.

I wanted that to be OK for other people too, because even when this band started [there was the] reality of what happened with Nirvana where they sold 10 million records and tipped the industry on its head — and they were just throwing fists full of money at everybody because they had no idea until they destroyed the record industry by giving $200,000 deals to every single band. Before that, I've looked at a band like the Minutemen, post-punk bands touring around in a van making $90,000 a year and having 500 people show up in any town that they chose to play at, I thought that that was a cool goal. "Oh yeah, everybody knows who you are even if they don't like you and you can pay for your bills. That's good enough." You don't have to a work a regular old job.

Everything has sort of tipped on its head, but you can't really blame musicians. It's so weird, I always had the impression that if people could just get the blonde supermodel wife and the invitation to the coke parties then they would not play music. So many people make these records and stop playing music when they get some sort of notoriety or some sort of door opens and then they're no longer interested in playing. They become so tortured that they can't leave their house and you're like, "What happened?"

MT: Based on that observation, how do you frame success?

Newcombe: Nobody expected me to do anything. I wanted to make it OK for self-validation because nobody was going to vote me capable of doing anything.

My mom was like, "You had a 170 IQ in kindergarten. Smart guys don't play guitar. You're crazy." Even if you're an artist, well, you're not really an artist unless art school says you can go or the gallery will show you. I don't want life to be about that, and I certainly didn't want it to be about some guy at one of the major labels saying that I can't play music unless he thinks he hears a hit on my demo tape. Or with a producer that doesn't even understand my type of music. Like, what is it that I'm trying to do in the first place because it's split equally between being forward-thinking, inventing something that's some genre, and also having truth and antiquated stye that is '60s music without being retro.

MT: At any point do you think there was any amount of self-sabotage to make sure you didn't fall into that?

Newcombe: Absolutely. From the beginning. We would take a lot of acid and I named our band "Blur" because it was so apropos. But then I opened up a magazine and there was a new band called Blur. So I said, "OK, I'm going to make something that nobody can think of." When I thought of Brian Jonestown Massacre, I was like, "OK, this is toxic," because of the legacy of the People's Temple and the conspiracies behind it. But actually the raw nerve that it touched and just the audacity of calling yourself that in San Francisco meant that we were banned. That continued on. I really wanted to be this tropical fruit with spines on the outside that was delicious on the inside.

MT: Self-sabotage can be a form of self-preservation. Do you think you've upset other people in your band or in your life for being adamant about not wanting to pursue that type of success?

Newcombe: Absolutely. People have thrown bottles at me going, "We could be fucking supermodels! I'm almost homeless because of the way you choose to live your life!" Real aggressive stuff. People didn't understand that in the movie we used spy cameras to film everything. It's not edited accurately because the people wouldn't consent to being shown. Basically people [were] threatening me, saying, "We want to own all your music, we're going to make you bigger than Kurt Cobain." Then sending me escorts with cocaine on behalf of the label going, "My boss wants to hire you. Let's party. Let's go to my hotel." And we filmed everything.

MT: You play devil's advocate. That's something people might be surprised to learn based on what they may have been introduced to in the film Dig!, which you've claimed is inaccurate. Is there part of the story you wish the filmmakers would have told differently?

Newcombe: The cool thing is William Morris Agency asked me to be in this movie and I said, "This other band is going to break up. Let's make this about my friend's band, Dandy Warhols, and me." They were like, "Who are they?" and I was like, "Let me introduce you."

My reasoning was, 'We've already got a bidding war going on in the West Coast. Let's film the whole thing — it's more interesting and I'm never going to sign a deal. This is someone who's going to jump through every hoop on your TV and I'm not.'

MT: Do you ever consider the legacy of the Brian Jonestown Massacre?

Newcombe: We're selling more records than ever and that has nothing to do with Dig! specifically. It has to do with everything together. This is international. All the ducks are in a row. We can tour and play anywhere, and that's the truth. We're just underground, that's never going to change.

It's a better place to be, to be able to look at the history of everything. I could go back in music magazines, the history of Rolling Stone album reviews, and you can see who didn't even make 20 years and the pantheon of important bands. There's just loads of people, even from the '90s. Like Liz Phair or something — she can't play bigger places than us. It doesn't matter whether she was on MTV every single day, nobody cares.

‘It's so weird, I always had the impression that if people could just get the blonde supermodel wife and the invitation to the coke parties then they would not play music.’

MT: The only way from the top is down?

Newcombe: Not necessarily. People have put their faith in record companies where record companies' best interests are, in many ways, against an artist's interest. All these people want to identify the principal songwriters from the players because the percentage with the one person who has the idea is a higher percentage than the split of five people splitting it. They kick everybody out and it just goes on and on like that and that's in conflict with what's best for artists as an ecosystem. It's in your best interest as an artist, as a person, to help support everything — to spread it around and keep it going or you won't have an ecosystem.

MT: You sound really grounded, happy. Are you happy?

Newcombe: Somedays. In my core, yes I am, but I am not immune to different feelings.

MT: Is there anything in particular that makes you really happy?

Newcombe: I have a 5-year-old son, Wolfgang. He makes me happy. My oldest son Herman is taking guitar lessons in New York. That makes me happy. It makes me happy on a deep level that out of his own gumption that he would decide to do that. Wolfy's hilarious and infinitely funny. The thing that makes me happy about Wolfgang is that he'll be watching cartoons and in the minutes before school he just flips it off. It's so cool because Disney programming is so compelling and so fast-paced but he does it without someone telling him.

MT: Has having a family changed your creative path?

Newcombe: No. None of that stuff specifically does because I'm in my own world as an artist.

If anything, that presents problems for your family because you are what you are. I work six days a week on my music, whether it has a goal or not. This last week I was just producing Roman Polanski's wife, Emmanuelle Seigner — doing a record for her and doing records for me and other people. I work a lot. That's not really good in a relationship with a family, but oh well.

MT: And this is who you are?

The Brian Jonestown Massacre will perform on Thursday, May 10 at the Majestic Theatre; 4140 Woodward Ave., Detroit; Doors at 8 p.m.; Tickets are $20-$25; With Special Guests the Stevenson Ranch Davidians.