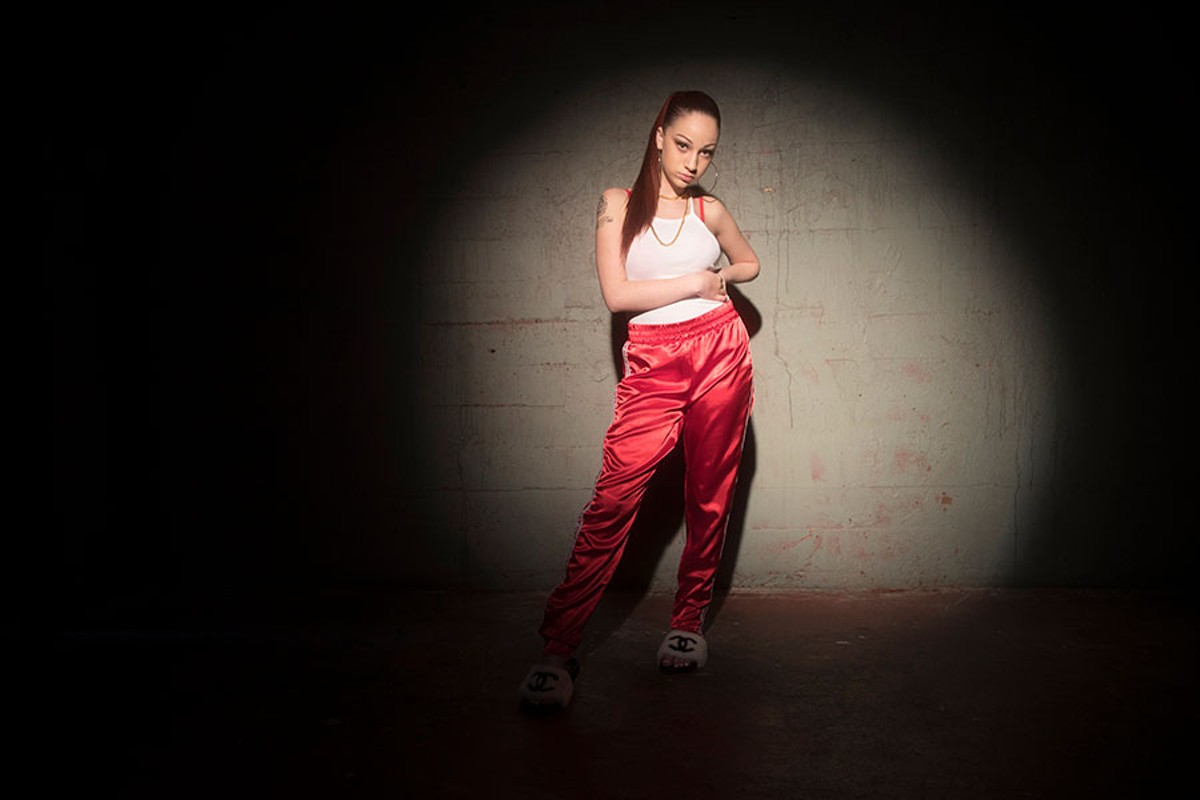 Danielle Bregoli doesn't want to talk about Dr. Phil and to be completely honest, neither do I. But as I devise a strategy for how to talk to a teenage girl whose claim to fame as a "car-stealing, knife-wielding, twerking 13-year-old" opposite the mustachioed syndicated shrink has been eclipsed by a seemingly legitimate career as a rapper, I decide to tread lightly. In doing so, I quickly take on the role of a high school guidance counselor. Pry too hard and you'll lose her trust. Ask too many introspective questions and you'll get one-word answers punctuated with snark, sass, and disinterest.

As it turns out, Dr. Phil had his work cut out for him.

The Boynton Beach, Fla., native adopted the moniker Bhad Bhabie, a subtle adjustment of the rapper's former Instagram handle Lil Bhabie and a nod to the fact that she "don't do anything good." Before the birth of Bhad Bhabie, Bregoli was reduced to a meme after coining the phrase "Cash me ousside, howbow dah?" (Google it!) during an episode of Dr. Phil in 2016 when audience hecklers provoked the teen to lash out with an unintelligible clap-back that would instantly go viral.

"The 'cash me ousside' girl isn't even a person. She doesn't exist," Bregoli says when asked of her recent past life. "There's a difference between Bhad Bhabie and Danielle, yes. Both of them are 'I don't give a fuck' type people, but Danielle does it respectfully and Bhad Bhabie doesn't do it respectfully."

Bregoli made her proper separation from her reality TV notoriety with her debut single "These Heaux" last August, which landed the problem child a multi-album deal with Atlantic Records a month later. Her second single, "Hi Bich," has amassed nearly 100 million views on YouTube. Just last month, on Bergoli's 15th birthday, "Hi Bich" earned gold record status after selling more than 500,000 copies — also making her the youngest female rapper to chart on the Billboard Hot 100.

"Thanks to all bhad bitches n dumbass hatin hoes," reads a caption on an Instagram video of the teen eating birthday cake directly off her gold record plaque, smearing icing across the glass.

When I talk to Bregoli, she is two days away from headlining her first tour, "Bhanned in the U.S.A." Many of the 25 dates are already sold out.

Is she excited for the tour? "Yes." Is she nervous to perform? "No." Does she write her own music? "Yes." When can we expect her album to drop? "Soon." She refutes the notion that she has a reputation for being angry and when asked about what she enjoys doing in her spare time, she responds with, "Getting my nails done, getting my hair done. Regular shit."

I was royally striking out. Or was I? Bregoli wasn't throwing punches, but she wasn't chomping at the bit to explain herself, either. My line of questioning received the "I plead the fifth" treatment, which ranged from favorite Snapchat filters (she doesn't have one) and future goals (private information). She was letting her music speak for her reputation, a seasoned PR move that screams "momager." As for the music, it's actually not that bad.

Her latest single, "Gucci Flip Flop" featuring Lil Yachty, is actually a banger. Its newly released video is borderline genius and features a cameo by David Spade (yes, that David Spade) as a milkman. Shot in black and white, the video mimics the stylization of the film Pleasantville, showing a prim and proper 1950s family gathered around a color television while Bhabie and Yachty spit rhymes that offend their traditional sensibilities, as they shield their ears and eyes from the cantankerous programming. Eventually, "Gucci Flip Flop" infests the viewing public, turning the parents into the tattooed, hell-raising youth they were so desperately trying to avoid. Bhad Bhabie knows her audience — or rather, she knows who her audience isn't, and she baits them any chance she gets.

I would be remiss if I didn't try to bring up cultural appropriation, as it is a topic that follows the teen rap star as persistently as anything pertaining to Dr. Phil. Like the white female rappers before her, she has received her share of backlash for her "blaccent" and stylistic choices both musical and in regard to her appearance. Comparisons to Kreayshawn and Iggy Azalea are unavoidable, though Bhad Bhabie's career seems to be dodging the fate suffered by both the former and the latter. But how?

"You cannot act a color," Bregoli told Fader in December. "Do not tell me I'm acting black because I'm not. I'm acting whatever you want to call it, urban. I don't even have a name for it. I just call it me." She later responded to accusations on Twitter with, "Bich don't act like u know where I'm from. If u can't appreciate turning nothin into sumthin then u need to get a new fuckin job."

When it comes to assessing the basis for labeling something or someone guilty of cultural appropriation, it's unclear. Hoping for some insight, I ask Bregoli about accusations of appropriation. But before I finish my sentence, she responds with, "I have no thoughts on that." Like a typical teenage girl, she lied to me, leaving me no choice other than to move on.

The question seems valid, considering a week before our phone call it was announced that Bregoli had earned a Billboard Award nomination for Best Female Rapper alongside Cardi B and Nicki Minaj. What is more shocking than a white female rapper snagging a spot in that category is that, unlike her competition, she doesn't even have an album out. And it's not like the industry isn't flush with female rap talent, because it is.

"It's amazing. It's crazy," she says of the nomination. "I was in bed just waking up and my manager called me."

Bregoli doesn't think she'll win. Not based on talent, but because she's just getting started. "These other girls have been doing this a little bit. I don't let my head get too big because that's when your shit starts falling," she says. "I've watched it happen to people."

She tells me she isn't phased by celebrity but wants to collab with Travis Scott. When given the opportunity to clear up popular misconceptions about her, she doesn't miss a beat: "I never put my hands on my mom and my mom never put her hands on me."

As I conclude on what I consider to be an unsuccessful interview, I have to wonder what makes music successful. Emotion? Autobiographical content? Is it empathy and the need for empathy to be reciprocated? If it comes down to credibility, well, Bhad Bhabie is only 15 and her skin is barely in the game. Her staying power relies entirely on the attention span of her smartphone-glued, double-tapping peers. However, if it comes down to honesty and self-reflection, Bregoli might have that shit on lock. In a final attempt to understand her message, which she says is centered around "not being afraid to express how you really feel," I ask her how she's grown as a person since stealing a car from a Dr. Phil employee two years ago — because, yes. She did that.