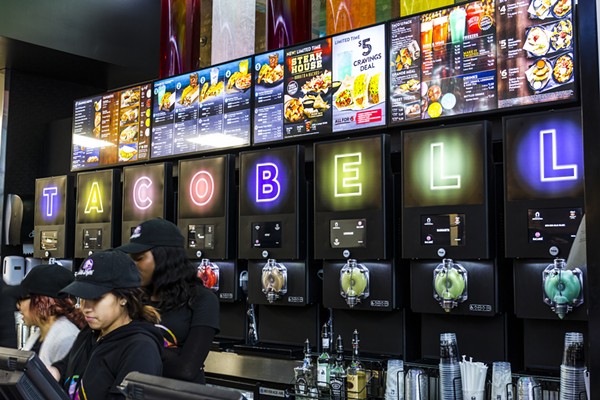 Taco Bell Cantina in Las Vegas circa December 2016. Photo via Shutterstock.
Word spread like wild fire on Friday that Royal Oak would soon be home to an alcohol-serving Taco Bell. The "Cantina" is a rare, new concept for the fast food giant, one that combines their quasi-Mexican dishes along with boozy Baja Blasts, among other drinks.

But, according to Royal Oak's Downtown Development Authority, the chain has not yet applied for a liquor license at the city level, which means that it's really too early to confirm whether or not the new location will indeed serve patrons their Crunch Wrap Supreme alongside a Spiked Lemonade Margarita.

Signage inside the windows of the old Cold Stone Creamery on Main Street promises a Taco Bell Cantina will open inside and beckons would-be employees to "be a part of the Taco Bell team to make History in Michigan."

But the DDA's Sean Kammer says, "it’s premature to have any official information at this point."

Taco Bell Cantina's debuted in 2015 in Chicago and the concepts have become increasingly popular. One opened in Cleveland earlier this year, and the company hopes to have 300 more locations in operation by 2020.