Royal Oak’s Pastaio can be a bit old-fashioned, but that’s not a bad thing 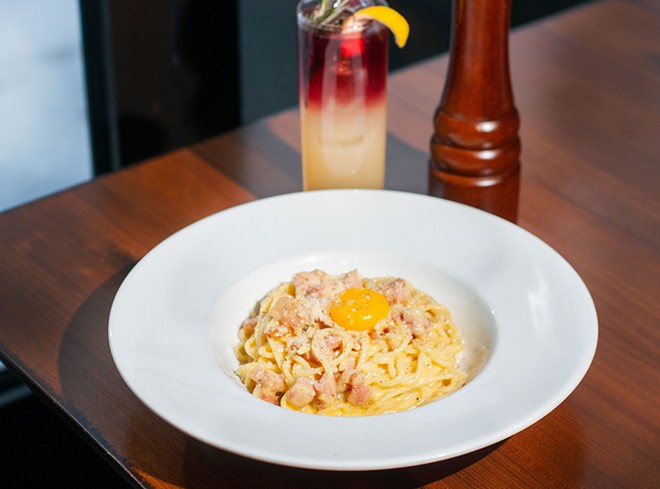 Tom Perkins
Pastaio places a glistening egg yolk atop its carbonara, which you break up yourself. It’s lovely and it works.

There's a reason Metro Times reviewers always visit a restaurant twice. The first time I went to Pastaio, I was fairly “meh.” The second time, I enjoyed myself thoroughly. Was it the choice of dishes? Had Chef Rob Mazzola upped his game that much in a couple of weeks? Whatever the reason, I feel comfortable recommending the place, though note its relatively high prices.

One reason is the welcome return of free bread, brought without your asking. And what bread it is! My companion and I went through two baskets — warm ciabatta shipped in from New Jersey, where owner Pasquale Lamarra is originally from. It's holey, tender but crusty, garlicky, and dressed with olive oil and plenty of Parmesan. The carb scare of the late 1990s, which continues today, just about did away with bread as a starter, but I am happy to see it return when it's done this well.

That's just one way Pastaio is a bit old-fashioned. Almost all the menu items, even the cocktails, are listed as $x.95. I know that's a time-honored way to make the customer think she's paying $18 rather than $19, but I thought most restaurants at this level had moved on to classier whole numbers.

Royal Oak's Pastaio, meaning “pasta maker” and pronounced pahs-TIE-oh, is one of three Pastaios, the other two being in Florida. A sign at the entrance says “Eat Pasta, Run Fasta,” a great reason to ignore the low-carb nags.

Small plates are suggested to share “pre-meal.” I would order the savory eggplant stack every time. The eggplant is breaded with panko and baked with roasted red peppers, fresh mozzarella, spinach, and tomato sauce, and garnished with micro-basil. The eggplant is silky, there's no sogginess at all. Even my non-eggplant-loving friend fought me for his half of the dish.

A kale Caesar was nothing remarkable, perfectly fine, with large croutons. The pear salad, the Misto, I found too wet with vinaigrette. Though it contains goat cheese and plenty of walnuts, the flavors weren't intense enough. Other starter possibilities are fagioli, carpaccio, burrata either fried or in a salad, and, if you want to go heavy, meatballs or ribs.

Rigatoni Boscaiola was a disappointing dish — not enough pancetta or peas or mushrooms, as advertised, but manager Antonio Marino says it's popular. Gnocchi, too, which are made with ricotta and flour rather than potatoes, were nothing special. These were both from my first visit. The second time, we asked the server what he liked, and he said the staffers often ask for carbonara. Well. I found out why. It's made with the least interesting of Pastaio's many different housemade pastas — spaghetti — but who cares? It's so rich with pancetta and Parmesan, olive oil and egg yolk, wholly satisfying.

When I make carbonara, I break the egg at the last minute and stir fast so the hot pasta cooks it quickly. (And full disclosure, I use the hot bacon grease as the liquid, instead of cream. This is a down-market carbonara.) Pastaio instead places a glistening golden over-easy yolk atop the heaped spaghetti and serves it that way, so you break it up yourself. It's lovely and it works.

Cavatelli with Sunday Sauce was also magnificent, in a different direction: lots of meat. The tomato sauce incorporates not only infinitely tender pork ribs on the bone but sausage and very tender meatballs. The spicing is just right — maybe some cloves?

Pastaio also serves classic entrées like chicken or veal Marsala or piccata or Milanese, and brick-oven pizzas. We're warned that the pizzas are cooked “well done,” so “the crust may appear more golden brown than you are accustomed to.” You can build your own or get specialty pies like quattro formaggi, mixed mushrooms, shrimp pesto, or kung fu chicken, which commits two sins in the same pizza: pineapple and barbecue sauce.

Speaking of classics, we had a wonderful five-layered tiramisu, of ethereal lightness and a strong coffee essence. Other desserts are chocolate cake and cannoli.

The wine list is extensive, more American than not. I don't like my wines soft, like Chardonnay, and I enjoyed a Pinot Grigio and an Italian Sangiovese-Merlot blend that was my kind of acid. My friend praised her aperol spritz as “pleasantly astringent” and pointed out that “it doesn't have that many ingredients, so they all should be good.”

One thing: you can't get to Pastaio from here. It's on a pedestrians-only block near the railroad tracks, and Google Maps does not know what to tell you. The best marker is the big red “Fifth Avenue” sign high above the restaurant across the street. Hone in on that and circle around till you find a parking space, then walk in. (It's the site of the former HopCat, if that helps.)

Although the service I experienced was nothing but fine, Pastaio is part of the lamentable recent trend for restaurants to act as if the customer is not always right. Management “may ask for your table once you’ve finished your meal” — very un-Italian! They'll add $5 to your bill if you ask the kitchen to split an entrée, and 3.25% if you use a credit card. These warnings are in small white type on the menu. And now you know.