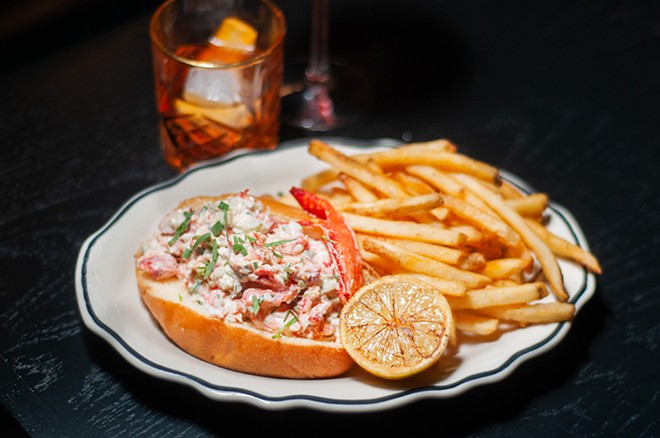 Tom Perkins
A lobster roll from Pearl’s Deep Dive was among the best we’ve tried in Michigan.

During our dinner at Pearl’s Deep Dive in Royal Oak, a server and guests at a neighboring table ran through all the iterations of the space at 11 Mile Road and Main Street over the years, arguably the best real estate in a town awash in it.

Among those that have come and gone are Memphis Smoke, Cantina Diablos, and Diamonds Steak and Seafood. We had to wonder if Pearl’s was next during a prime-time Saturday night visit, when the restaurant was about one-third full.

What accounted for the empty tables? The concept — high-end seafood — seems to be a perfect fit for downtown Royal Oak, and the menu showed promise. But while we found some satisfying plates, Pearl’s at times simply lacked execution. Take the oysters, for example. They were lightly briny, creamy and cucumber-y from front to back, but I can’t tell you where they were from or anything about them because our server didn’t say much beyond “British Columbia.”

And though the taste was there, several had shells in the meat, or we had to wrestle with the meat to get it out of the shell, meaning whoever shucked them shouldn’t be shucking. Metro Detroit’s oyster and seafood game has significantly improved over the last five years, and this felt like a level of oyster presentation that would have passed in 2010 when few knew any better. Minimal effort is required to fix these issues, and if they are persistent, then we might know why Pearl’s wasn’t packed with oyster connoisseurs on a Saturday night.

At the opposite end of the spectrum, the lobster roll was among the best I’ve had in Michigan, and that alone should put Pearl’s on your map. Typically, Maine-style lobster rolls are cold and served with mayo and celery — effectively lobster salad — while Connecticut-style is served warm and dripping in butter with no mayo. Instead of offering a Maine or Connecticut version, Pearl’s serves “New England lobster rolls” with the option of warm or cold. We got warm, and the brioche bun was stuffed with a heaping portion of buttery lobster that was tossed with celery. The toasted brioche bun was substantial, not a flimsy hot dog bun as is common with many lobster rolls, but it also didn’t overshadow the lobster. The fries served with them were crisp and perfect.

In fact, Pearl’s was at its best with lobster. The lobster dumplings offered chewy noodles encasing a nugget of lobster and scallion, and the four packages were served awash in a slightly rich green chili cream sauce, and under a nest of microgreens. A solid plate.

The crisped potatoes and caviar arrive with a small block of hash brown-like potatoes adorned with a dollop of whipped crème fraîche that holds a small amount of caviar. Tasty, but the caviar really has to be rationed to a few bites or it’s gonna get lost in the mix. And when it’s gone, you’re basically left with fancy hash browns, which is nice, but totally not what I came for.

The lump crab cake had a few fishy bites, and it was altogether average. We couldn’t detect the horseradish in the horseradish remoulade, which really could have gone a long way to ramping up the plate. The vinegar-y and acidic corn salsa that came with it added a pleasant dimension.

Pearl’s beer selection is short, though it has Bavik Pilsner, which is one of the best beers out there and hard to find, so props for that. The cocktail list is inventive — see the Berry Berry Bubbly, which bubbles and smokes and is made of Valentine White Blossom Vodka, prosecco, Grand Marnier marinated blackberries, and black currant Liqueur. It also had the classics, and a cucumber gimlet we got was boozy but balanced and refreshing, and a nice complement to the meal. The vibe is one that seems intended to evoke glamor, with deco lounge decor, the kind of environment that makes one want some to slurp down some oysters.