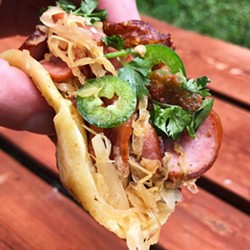 Mike Ward
Pietrzyk Pierogi's pierogi taco.
When the corned beef egg roll, a deep-fried Jewish deli-Chinese mashup was introduced to our refined, very sophisticated metro Detroit palates a few years ago via Detroit chain Asian Corned Beef, our minds were blown. What could possibly follow in its freaky fusion footsteps?

That's right. Part pierogi, part, well, taco, the pierogi taco is being offered by two local restaurants because... oh, who cares about the why of it all.

Self-described “Pierogi Queen” Pietrzyk told the News that she doesn't normally pay attention to food trends like this (Remember the sushi burrito? Neither do we.) but said she had been tagged in so many social media posts demanding the culinary Frankenstein-creation, that she finally decided to put her spin on it. In addition to sauerkraut, smoked kielbasa, and sour cream, Pietrzyk has added a kick by topping each one with cilantro and jalapeño. The shell is also taco-ified and is made with jalapeño, cream cheese, and cheddar cheese because, cheese.

Similarly, Polish Village Cafe felt inspired by social media posts made by food-hacker and viral chef Josh Elkin, who is known for concoctions like a taco with shrimp paella and a Spanish omelet as a tortilla or a McDonald's Big Mac-hot dog hybrid.


Though both of the restaurant's offerings are made by using a pierogi shell and traditional Polish fixings, Polish Village makes their tacos with apple bacon, caraways seeds, more bacon, red peppers, and sour cream. They also offer a chorizo pierogi made with Mexican cheese, red cabbage and reddish slaw, garnished with avocado.

Don't expect to roll up on a Thursday thinking it's Taco Thursday, because that's not a thing. Polish Village Cafe has included the pierogi taco as part of their exclusive Taco Tuesday menu. As for Pietrzyk Pierogi, they're offering a limited number of tacos via their store in Gratiot Central Market, Thursday-Saturday, 10 a.m.-2 p.m., as well as limited amounts via Urbanrest Brewing Company this Thursday, 5-8 p.m., and Friday, 5-9 p.m. at Brew Detroit.

For more information as to how you can get one of these first-come, first-served tiny taco treasures in or around your mouth, visit polishvillagecafe.us and pietrzykpierogi.com.