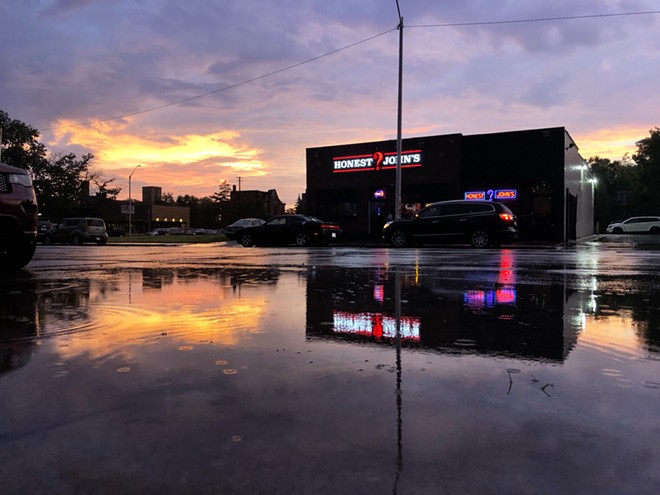 Steve Neavling
John Thompson moved his bar Honest John's to Midtown in 2002 and sold it in 2014.

John Thompson, the former owner of Honest John's bar in Detroit, died earlier this month of congestive heart failure, The Detroit News reports. He was 66.

Known equally for his brutal wisecracks and a big heart, Thompson appeared in the pages of Metro Times many times throughout the years thanks to being a quote machine. He was also known for setting up various offbeat charities through his nonprofit, "Honest?John’s Shakedown Society," and for giving kayak tours of the Detroit River.

Originally setting up shop on Jefferson Avenue near Belle Isle, after a decade Thompson moved Honest John's to his childhood neighborhood of the Cass Corridor in 2002. Thompson grew up nearby Honest John's second location on Selden Street.

He told Metro Times that he never knew his father, and his mother was a prostitute who died of a heroin overdose when he was 12. Throughout his adolescence, he bounced around foster homes and juvenile facilities.

The bar's famous neon sign, which reads, "Sobriety Sucks," was brought along for the move. Indeed, Thompson battled with alcoholism.

Metro Times archives
John Thompson.
"It's hard, it's so fuckin' hard," he previously told MT. "I pour shots of Absolut, and the hairs on the back of my neck stand up. But I'll never drink again. In this business, you can either work really hard and stay sober and make lots of money, or drink a lot and accomplish nothing."

Since then, Thompson raised hundreds of thousands of dollars for various charities and local churches with quirky fundraisers, like Dipps for Toys (a polar plunge into the Detroit River, with people wearing crazy costumes) and a Devil's Night barbecue.

Relocating proved to be a prescient move, with Honest John's predating the Cass Corridor's transformation into Midtown. In 2014, he sold the bar to the Kwiatkowski brothers, owners of the trendy cocktail bars Wright & Co. and Sugar House. (He even called us and left a voicemail thanking us for being the last publication to write about his bar before he sold it, but we missed the scoop. D'oh!)

Another time, Thompson told us that the most important thing to remember when going out to the bar, even the dingiest of dive bars, was respect.

"You're there as a guest, not somebody who's going to make fun of people," he said. "There's nothing worse than a bunch of kids who come in and decide to make fun of an old guy who's been there his whole life!"

Yet another time, Thompson mused about reincarnation.

"I never did golf, smoke, do heroin, or been gay," Thompson told us. "In my next life I’ll be one cocksuckin', golf-club swingin', chain-smokin' heroin-addicted sonofabitch!"