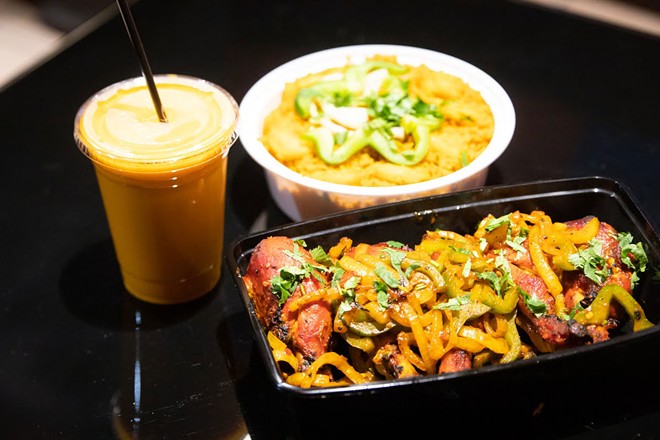 Pink Garlic is somewhere between red- and white-hot. This Oak Park Indian eatery, if not the talk of the town, certainly seems an au courant topic of foodie conversation. You can’t eat there — still you should, I’ve heard. You may wait, but it’s worth it, I’ve read. Assigned to weigh in on the subject, I set out to see for myself what all the buzz is about.

At the get-go, I felt good vibrations. Browsing both printed and online menus, prices are most approachable with options numbered for easy ordering. Bullet-pointed descriptors in broken English dotted with typos heighten hopes that folks fluent in Indian cookery above all else are at the helm here. Phoning in, I exchanged pleasantries with a gentleman who took my order in no time flat. Two minutes before I pulled into the parking lot, Pink Garlic called back to let me know everything was ready. Running a purely carry-out operation, they proved most efficient in short order.

Inside, sure enough, no one’s eating. COVID culture’s not the culprit here, though. Space constraints are. The interior’s the size of a tool shed. There’s just enough room to walk in, grab what you came for, then turn around and go. While literally rubbing elbows with a handful of hungry others as I settled-up, the only interior restaurant ambience I perceived beyond beguiling aromas was the clatter of busy kitchen conversation barely muffled behind a draped kitchen doorway.

Having bargained to share my bounty with friends in nearby Royal Oak rather than drive the longer leg home to Livonia before feasting, I had much to unpack when we sat down for a look-see. As the lady of the house observed once we dug in, plastic and disposable packaging don’t do justice to restaurant dishes plated more appetizingly during dine-out experiences. Cuisine of the Indian continent, certainly, loses a little in the translation from visually vibrant platter arrangements to snap-top Styrofoam.

Papadom, for a start (75¢), failed every eye test. The fried bread wafer, thin and brittle as dried parchment, proved impractical as a sop or scoop, falling to pieces as we tried to dip in with it. Naan would have been the better choice, and many — including some topped flatbread-style — are offered ($1.99-$3.99). Onion “bhaaji” ($4.99 for two), were more satisfying. Think onion ring poppers if you’ve never had the pleasure. These provided a sturdier tasting platform for topping with our mango chutney and mint sauce. Lentil soup ($4.99) was downright luxuriant, with most of its legumes cooked completely down into the silky, aromatic, and herb-flecked stock. Vegetable samosas ($3.99 for two), big and round as baseballs, were less a hit; still doughy under their thick, fried-hard shells and unwieldy like some State Fair snack in need of a stick.

Covering all the protein bases, main courses proved a mixed bag as well. As a lamb lover who ate for a living in the spicy Desert Southwest, I had high hopes for Pink Garlic’s lamb curry ($12.99). They were rewarded with meat cooked tender in a deep-colored sauce ordered medium spicy. Like the best Spanish moles, great curry sauces — nuanced from recipe to recipe — are a construct of complex flavors finessed from many ingredients that combine through careful cookery. Save for the subtlest sweetness, this rendition was too one-note hot to sing in example. The lamb’s flavor was lost to singed tastebuds, leaving me with a purely pyrotechnic impression of the dish. Standout models are more balanced and less molten.

For two reasons, “full” tandoori chicken ($16.99) fell fairly flat. These birds, though brightly colored by a bath in a turmeric and chili powder-tinged yogurt marinade, translated little of the taste a long soak in bold spices and a blistering roast in a searing tandoor should have dictated. And when I say “these birds,” let me explain. Reading “full” chicken from the menu, I assumed we’d be getting just that. What was served instead were four smallish leg and thigh portions. Minor quibble, maybe, yet I was ordering for three other chicken lovers, two with white meat preferences. Perhaps I shouldn’t have assumed. My bad. As to the cook of the poultry itself, again, too much fire took a toll — this time, from prolonged exposure to flame. The meat wasn’t utterly dry, but the moist succulence which whets an appetite for a good chicken leg or thigh was gone. That Epicurean oxymoron “well-done” might simply describe it best.

Shrimp biryani ($13.99) proved the purest pleasure. Rather than belabor beyond interest every prep step requisite in rendering quality biryani, suffice it to say, a lot goes into it: Chopped herbs (mint, cilantro, et al.), ground spices (cinnamon, cumin, cloves, star anise, to name a few), saffron-infused milk, fried string onions, and a base of even further infused basmati. Then all that comes together in a culminating kind of crock pot process. Bites of firm and plump shrimp so scented and in hearty company with perfectly puffed rice tangled with fresh-torn herbs and crisped onion strings left me applauding the effort with every forkful. Finally sated, refreshing mango lassi ($3.99) — a defacto yogurt smoothie — did the trick for dessert.

Pink Garlic is having a nice moment on our dining scene. Consensus seems to say it is well-deserved. My take’s a one-off at this point. Sampling just eight of its 114 offerings doesn’t qualify me as an expert on this subject. Here’s what I do know: The future will find me continuing to break bread and make merry with my peeps in Pink Garlic’s neck of the woods. While I’m less sure about going back for seconds at this point, stay tuned. 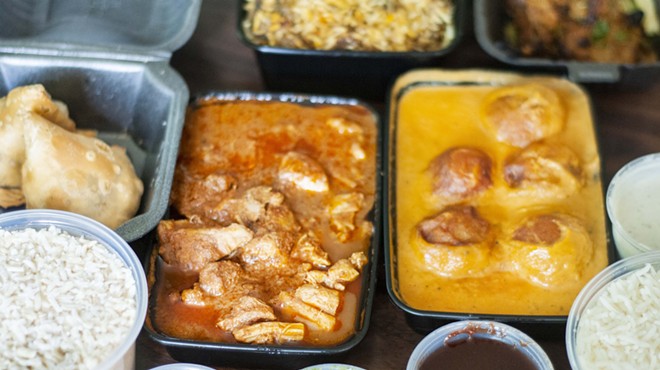 Long-standing Rangoli Indian Cuisine in Auburn Hills lives up to its hype: The restaurant has been around for about 20 years