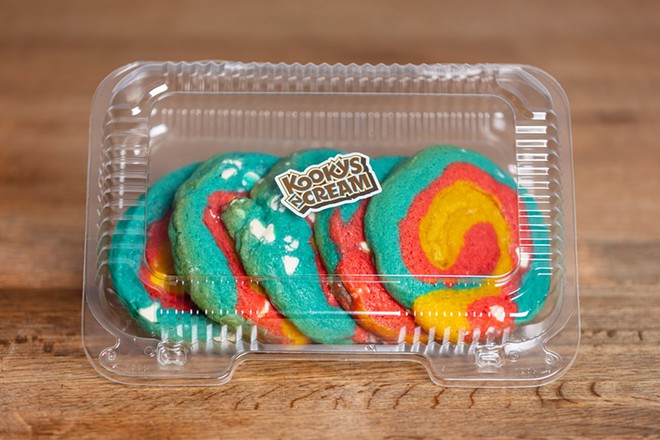 Michigan is entering the spring, and with that comes Fat Tuesday, a celebration of edible excess and the start of Lent. The tradition of eating decadent paczki for Fat Tuesday has been part of Michigan culture for decades, and now the packzi is getting a makeover from Kookys N Cream, a Lapeer cookie shop that went viral on TikTok and is a favorite of influencers getting their fix of Michigan-made sweets.

Founder and co-owner Jessica Harold says Kookys N Cream got its start in late 2019, six months before the pandemic, but the idea had been on her mind for a while.

Harold says her background in the advertising industry, where she worked with ad agency Leo Burnett on campaigns, including the Allstate “Mayhem” commercials, gave her the experience necessary to start her project.

She partnered with her friend and owner of Woodchips BBQ in Lapeer, Patrick Hingst, to start the company.

“So I told him about this idea. Prior to that moment, I had called it ‘50/50,’” she says. “It’s such a high proportion of like this really chewy, awesome textured ice cream. And in that moment, I said, ‘Oh, yeah, let’s do this. And we’ll call it cookie cream.’”

Within months, Kookys N Cream went viral on TikTok, thanks to Emily Feret, a lifestyle vlogger with more than 1 million followers known on the platform as @EmilyJeane333, who tried the cookies after Harold sent her a box. After she posted a video about the cookies, orders started rolling in, and suddenly Kookys N Cream was fulfilling 600 orders, Harold says.

Then Kookys went viral again, for a different reason. A TikTok star named Zoe Roe, whose account @zozoroe has more than 7.4 million followers, uploaded a video in praise of Kookys N Cream’s cookies — but someone else then reuploaded the video without proper attribution.

“From there, it kept building,” Hingst says. “Our most popular video that happened after that was somebody stealing Zoe Roe’s video, republishing it without crediting her. So this triggered their algorithm because all her fans were like, ‘You didn't even tag Kookys N Cream, you didn’t tag Zoe Roe.’ That tricked their engagement algorithms, [and] that became our biggest video, which actually blew us up bigger.”

YouTuber Trisha Paytas also got in the Kookys N Cream craze, and bought cookies and filmed a video trying them, sharing it with her 1.44 million followers.

Kookys N Cream is pushing the envelope just a little more with their latest invention, the packzi cookie. Harold and Hingst share Polish heritage, and with Fat Tuesday right around the corner, Hingst explains the inspiration for the cookies.

“I had the idea of, you know, with Kookys n Cream, take classic desserts and ‘kookify’ them,” she says. “So packzi was right for ‘kookifying.’ We tried in the past, but weren’t able to pull it off. We have such an amazing head baker right now, that we threw the idea at her, and she just ran with it. And so we’ve been able to marry, you know, both the texture, the richness, and the fun of a packzi, [and] put it into a cookie, which in my mind is much more manageable, and it’s a different experience.”

She adds, “It’s not quite as over the top as, say, the lard-fried paczki. It’s still gonna bring that kind of same, you know, that bite through, and you get the jelly, or you get the custard in your mouth, and the nice glaze sugar on the outside. So we just knew it would be something fun, and knowing how big paczkis can be in the area.”

The two explain that the secret to marrying the doughnut-like dessert with a cookie is yeast. The cookies also have a more extended shelf than traditional paczkis, which are usually enjoyed immediately. 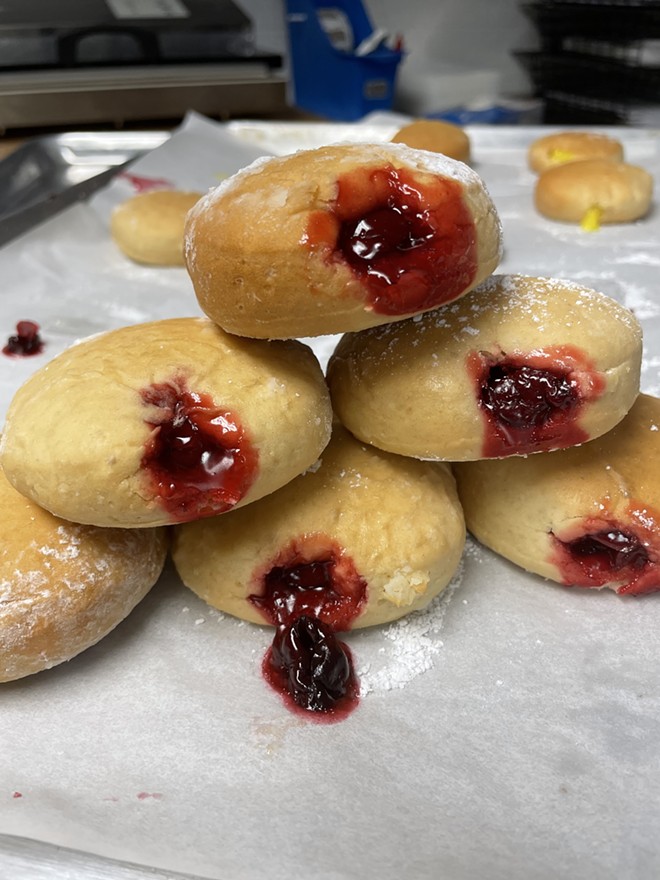 In addition, they also kookified another Michigan staple: Superman ice cream. Largely unknown outside of the midwest, the treat is mixes three flavors — strawberry, lemon, and blue moon. The dedicated process to creating the cookies includes rolling three separate doughs and then meshing them to make the Superman cookie, which shares the ice cream’s iconic colorful swirls.

“So we tell people that the Superman cookie cream is the only Superman ice cream that they can actually chew, you know,” Harold says.

Is your sweet tooth aching yet?

With combo boxes and a la carte ordering services available, you can create your own Kooky experience. Paczki cookies are only available to pick up from the Lapeer location at 374 W. Nepessing St., (kookysncream.com) and will be available from Feb. 26 to March 1. The orders will feature a box of two custard-, two cherry-, and two lemon-flavored paczki.

You can follow Kookys N Cream on their social media channels, including their TikTok, and watch their baking adventures unfold.

Romanian import and Greek school dropout Konstantina Buhalis was born in Bucharest, Romania, and came to Detroit in December 1995, where her first few years of life were enjoyed on the east side and Greektown. Buhalis spent her early years reading the Detroit Free Press, Teen Vogue, and Rolling Stone and began...
Scroll to read more Food News articles