The former clubhouse has been reimagined with a ‘Key West’ vibe 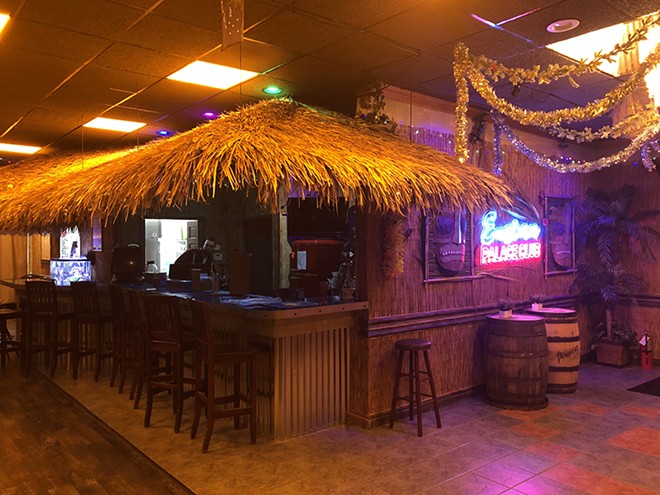 Metro Detroiters will soon be able to escape Michigan’s gray winter doldrums by sipping Rum Runners under a thatch roof while listening to the waves crash on a nearby beach.

That’s the idea behind Hazel Park’s Eastern Palace Club, which has been reimagined as a beach-inspired bar that celebrates its grand opening week starting on Tuesday.

A palm tree and a mermaid have been painted on the sides of the building, and the finishing touches are being put on a sign made out of a surfboard. Inside, cabana-shaped booths have been constructed with thatched roof canopies in a space decorated with tropical knickknacks and festive lights.

“When you’re sitting at the bar, it literally feels like you’re in a tiki hut,” says co-owner Mike Pierce, adding, “When you go to the beach, and you have a party with your friends — that’s what we’re trying to capture.”

Pierce co-owns the new Eastern Palace Club with partners Dustin Leslie and Adam O’Connor, who all come from experience in hospitality and events. (Full disclosure, O’Connor previously worked at Metro Times.) The project started a little more than a year ago after the building’s previous owner, who operated Eastern Palace Club as a private, members-only clubhouse for years, decided to close up shop amid the COVID-19 pandemic.

That’s when Curt Goure, who owns B.D.T., the long-standing head shop across the street, acquired the building, offering the space to Pierce and company to lease.

“It was very plain,” Pierce says of the previous incarnation. “It did not look like how it does right now.” 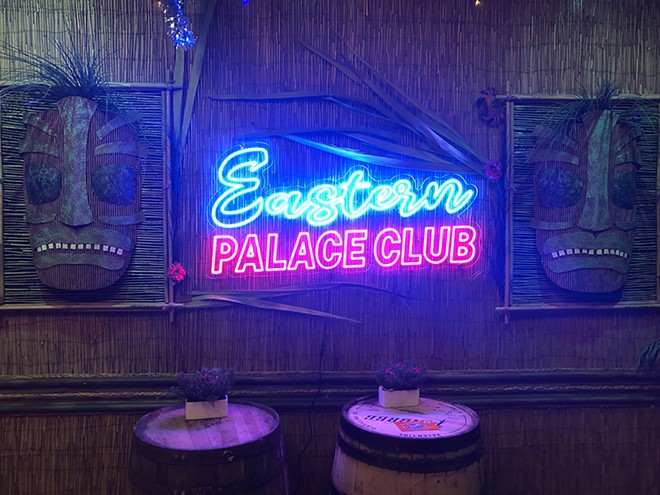 Lee DeVito
Tropical knickknacks like tiki masks have been added to the space.

After brainstorming various concepts, the owners decided on a beach bar theme, inspired by their experiences in Florida’s Key West. To promote the new bar, they even made post cards emblazoned with the message “Greetings from Hazel Park” and a cheeky tag-line, “Key West’s Northernmost City.”

While metro Detroit has other tiki-themed bars that have opened in recent years — like Detroit’s Lost River and Mutiny, and Ferndale’s new Mai Tiki — Pierce says his co-owners were going for more of a laid-back beach bar vibe. So don’t expect fanciful tropical drinks served out of ornate ceramic tiki mugs, though the bar will serve up classic tiki cocktails like Painkillers and piña coladas.

“The goal is to have some very cool signature drinks and offerings, but also be very approachable just as a daily watering hole,” Pierce says. The menu will also include sangria and non-alcoholic options.

The space features touches like an aquarium with live fish and tables constructed from repurposed construction spools. It retains the drop ceiling from its previous incarnation, but transparent gold and blue panels have been placed over the lights. “So it has this persistent feeling of that sunset at twilight, which is super cool,” Pierce says.

There’s also a projector that can display scenes from a beach on a wall, and it even has speakers playing audio of waves crashing. Pierce says the projector can also be used to play sports games.

The bar space is rounded out by arcade-style games, including a Simpsons pinball game, Skee-Ball, and a pool table.

The building also came with a kitchen. To utilize it, Eastern Palace Club has partnered with Smoked Lotus BBQ, which will serve barbecue for dine-in and carry-out. 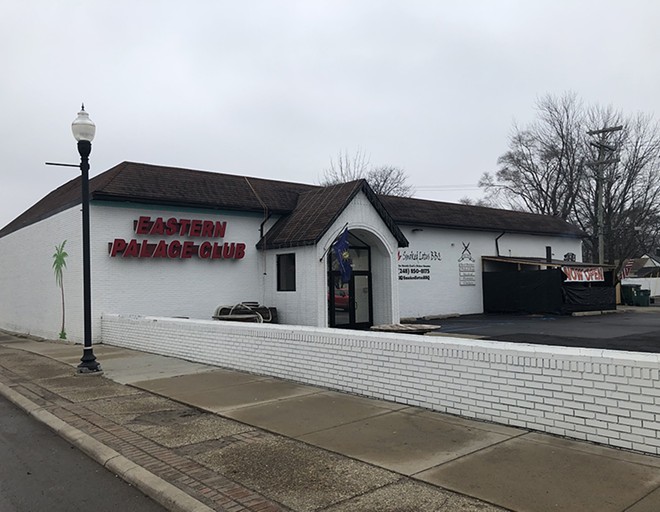 Lee DeVito
A palm tree and a mermaid have been painted on the sides of the building, and the finishing touches are being put on a sign made out of a surfboard.

In recent months, the space has hosted a series of pop-ups that served as soft openings. Pierce says they learned of their liquor license approval just before New Year’s Eve, and made plans to celebrate their grand opening on Tuesday, Jan. 17 — which happens to be National Bootlegger’s Day, or the date in 1920 that the U.S. began its short-lived experiment with alcohol prohibition, until the ratification of the Twenty-first Amendment in 1933.

The building also includes a large parking lot with nearly 50 spaces. Pierce says they are considering hosting events outside.

“Especially in the nicer months, maybe even in the colder months, we might have a winter luau or something,” he says.

The Eastern Palace Club is located on John R Road north of Eight Mile Road, in a part of Hazel Park known as the South End. Long a blue-collar suburb, Hazel Park has seen an influx of new businesses in recent years in the area, including acclaimed chef James Rigato’s high-end restaurant Mabel Gray, the dining space Frame, and a number of cannabis dispensaries.

Pierce — who previously worked with Ferndale spots the W.A.B., the Emory, and the Loving Touch — says he became interested in nearby Hazel Park in recent years as rents and house prices in Ferndale increased. He eventually bought a house in Hazel Park. 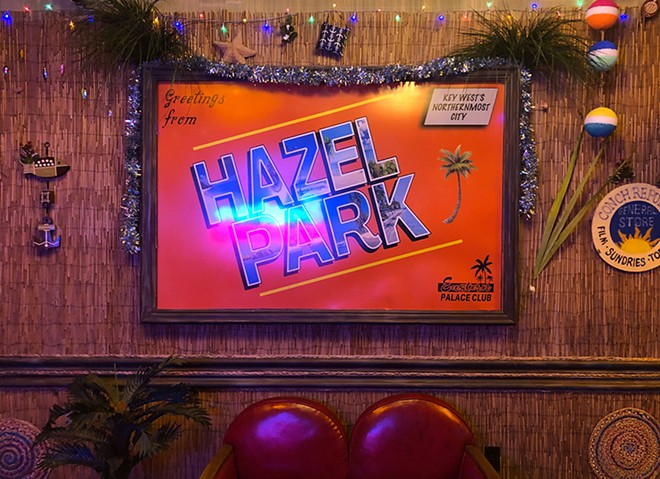 “We’re talking six, seven years ago, when all of my staff at the time couldn’t afford to live in Ferndale,” he says. “And so they were going one of two ways — they were going to Oak Park or Hazel Park.”

“The goal was just to kind of get this up and rolling and see where we take it,” he adds.

Other developments are happening in the South End. B.D.T., which opened its first location in Hazel Park in 1974, is undergoing a massive renovation, and other new businesses like Dee’s Quick Bites and Hazel Perk Cafe have also opened nearby recently.

“A lot of cool things are happening in this tiny little bubble right now,” Pierce says. “We’re excited to be on the forefront with the first bar — and we’re not gonna be the last. I think it’s awesome.” 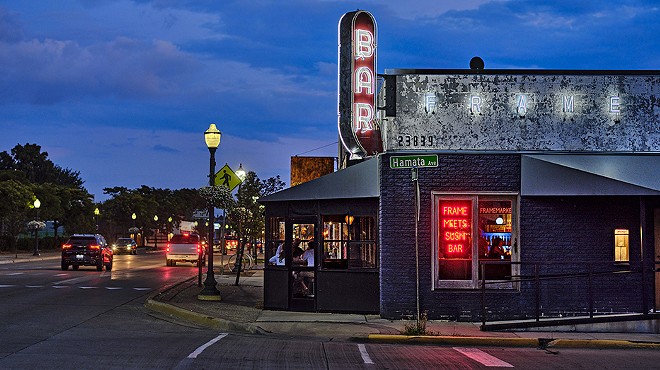 A hipper Hazel Park? Why the longtime blue-collar suburb is experiencing a renaissance: From horse-racing to high-end pop-ups

Leyland "Lee" DeVito grew up in the suburbs of Detroit, where he read Metro Times religiously due to teenaged-induced boredom. He became a contributing writer for Metro Times in 2009, and Editor in Chief in 2016. In addition to writing, he also supplies occasional illustrations. His writing has been published...
Scroll to read more Drink News articles