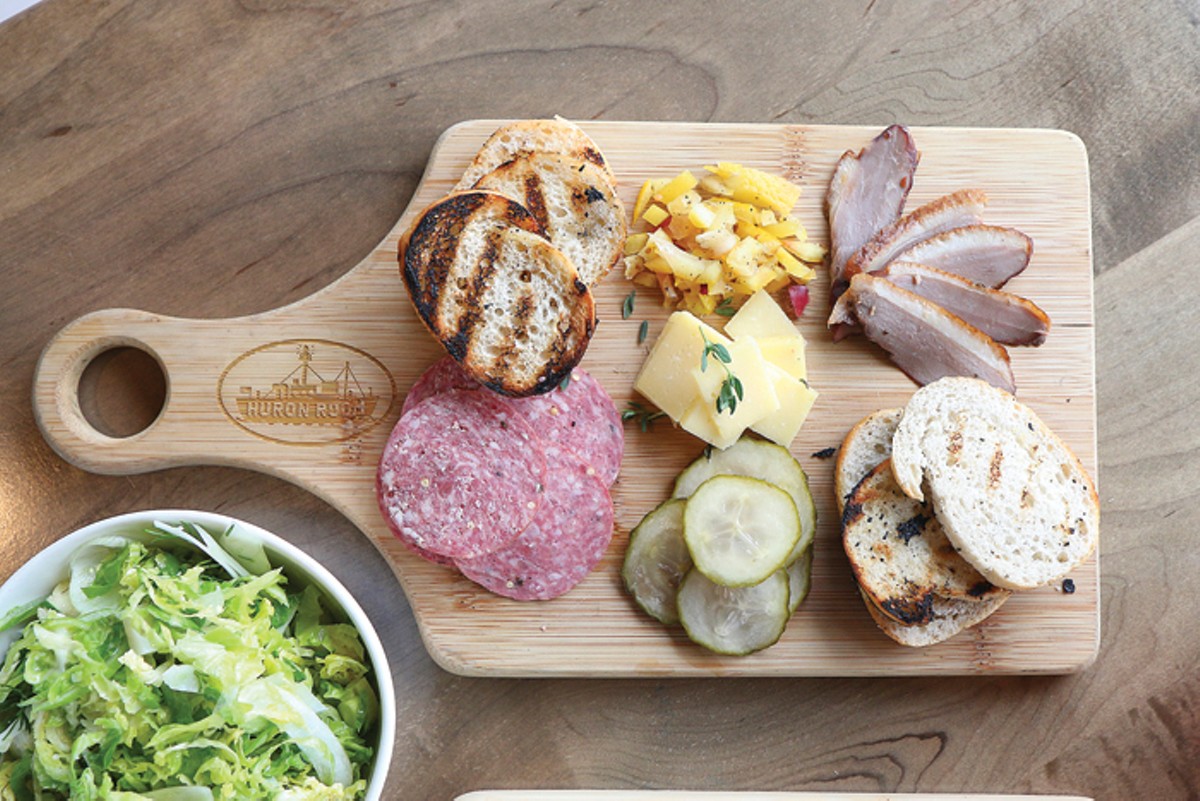 We tend to think of the area west of Michigan Central Station as Mexicantown or Southwest Detroit, where one can procure a beefy cheesy burrito, Latino-centric groceries, and freshly baked pan dulce at the many long-established restaurants, markets, and bakeries. With the addition of Huron Room at Bagley Avenue and 18th Street, we are seeing more signs that the reach of trendy new places to dine and drink is slowly expanding.

Huron Room is one such example. Situated inside a former abandoned liquor store and adjoined by the Our/Vodka distillery, the spot introduces the neighborhood to classic fish and chips, where ingredients pay homage to everything Michigan in a room that is noticeably bright and nautical-themed.

Behind the concept we have husband-and-wife restaurateur team, Jacques and Christine Driscoll, who launched both Green Dot Stables and Johnny Noodle King. Jacques Driscoll tells us Huron Room was in many ways the couple's most ambitious project, not just in the menu, but in the revamping of what was once an abandoned party store that was completely gutted. Driscoll bought the property about two years ago and had planned to install his noodle concept there. Because the cinderblock building needed so much work (it lacked water, electricity, and a roof), the couple kind of picked at making repairs. In between that time, they acquired Johnny's Ham King on West Fort Street and proceeded with launching the ramen house there instead.

Every detail of the blue and white space that encompasses Huron Room waxes nostalgia (in a good way) of the classic fish and chips joints your parents used to take you as a kid. Instead of conjuring up hokey shiver-me-timbers memories, wrought with paper pirates' hats, the Driscolls, who are San Diego natives, give the concept a sophisticated, Michigan twist.

If you've ever spent any time looking at old navigational maps of the Great Lakes, you'll appreciate Huron Room's aesthetic details. A mural of the lightship Huron covers one wall, white benches that make up some of the 77-seat capacity look like they belong at a boardwalk in its heyday, and, what we really dig, is a custom-designed bar — comprised of a concrete seawall featuring rusted out metal ladders — all details that are so dead-on you'll swear you've just heard the faint cry of seagulls in the distance. Even the name pays respect to the oft-overlooked Lake Huron (the Driscolls have a special place in their heart for Huron as they own property in Port Austin). In similar fashion to JNK's eye-catching signage, the look is completed with an oversized fish sculpture that "swims" through a corner on the exterior of the building.

So yeah, by the time you sit down it's obvious that fish is the menu's main draw, designed by chef Les Molnar, who also heads the kitchens at Green Dot and JNK. Here, you get to choose how you want to devour the catches — Ohio yellow perch, walleye, smelt, river trout, and a rotating catch of the day. Have it straight ahead as a classic fish and chips combo, with thin-cut fries and slaw; take in sandwich form in a generous bolillo roll; or give a nod to Mexicantown and enjoy it in tacos (they come grilled and nestled in corn tortillas, with onion, cilantro, and lime).

For the fish and chips and sandwich, the fish comes beer-battered and fried. The filets taste light, refreshing, and not overly fried. They're also served in abundance, especially in the sandwich, so order if you've got the appetite to match. Thin-cut fries come with both selections, and a glass spray bottle of malt vinegar gives you the chance to spritz on a smidge or drench them. As for the tacos, call us biased, but having grown up a short road trip away from the to-die-for Baja-style ones, we tend to overlook any that come out of the Midwest.

As for non-fish entrees, Huron Room recognizes not everyone is a fan of seafood. In keeping with the Michigan theme, the selections aim to give that old-time huntsmen vibe. There's a half game hen that comes grilled and served with carrot puree, campfire potatoes that are confit and then grilled with herbs, garlic and Huron butter, and chimicurri. There's also the popular Huron Room patty melt, as well as a turducken meatloaf, with pub sauce, those campfire potatoes, veggies, and gravy. Early on, the menu also included an ambitious Peking pheasant, which we tried. It came out quite fatty and fell flat of delivering on a dish that's otherwise prized for its thin, crisp skin when prepared with the duck.The rest of the menu is divided up by skewers, greens, and bait (appetizers) — all of which range from $3 to $11, making for decently priced bar snacks. We loved the Scotch quail egg skewer, which is covered in house-made chorizo, fried, and accompanied by a chipotle mustard. The frog legs were also tasty, but were a tad too dainty, leaving us feeling like a kid pretending to nibble off those tiny baby corns. We sampled the apple walnut frisee and Brussels sprout salad, both of which laid the vinaigrette on heavy. The Great Lakes chowder was delicious and rustic, complete with Great Lakes fish, potato, rutabaga, bacon, onion, carrot, chives, and croutons. Also intriguing, a UP pierogi, which gives you the savory filling of a traditional pasty, but with a Polish-style exterior.

The Huron Room sports a delightful bar and the Driscolls take great care in stocking it with as much Michigan-made booze as possible. Nine brews are on draft at any given time and are on the more adventurous side. The more recognized standards like Bell's Two Hearted are on the roster of 40 to 50 bottled or canned beers. Wines and spirits also lean on the Mitten State's growing winery and distillery scene, and cocktail names are equally inspired, with choices like the Cherry Cold Duck Riesling cocktail and the Rock the Boat, with Faygo Rock & Rye, New Holland Walleye Rye, and Campari.

Our recommendation for this place is to go for the fish, stay for the drinks and bar snacks, and don't be afraid to invite your persnickety nonseafood-eating friend.