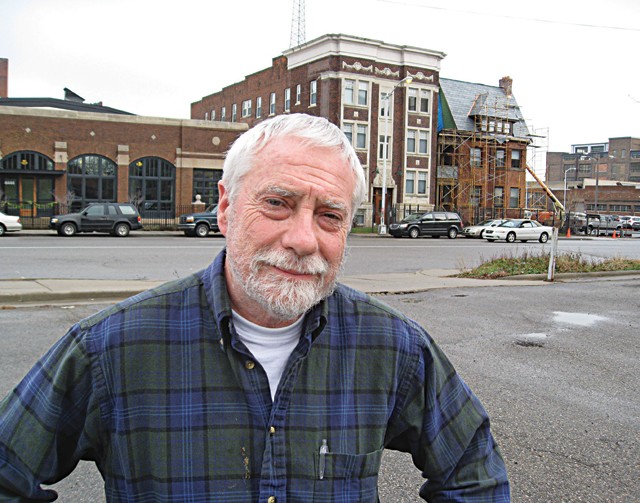 Longtime patrons of Detroit's Eastern Market got a good scare in October with the announcement that the venerable R. Hirt Jr. company, founded in 1887 and run by four generations of the same family, was closing its doors. As it turned out, fortunately for fans of the vendor of specialty goods, the store won't be closed for good. It's actually closing for a mild renovation and passing back into the hands of another Hirt descendant, the man who ran it until recently, David DeVries.

Officially speaking, DeVries gains occupancy of the building Jan. 1, and the renovation should be done by March. "I tell people: The business is 124 years old; if we have to take three months off, I think they'll understand."

DeVries is a little bit of Detroit history himself. Taking time out to speak with us at the Thistle Coffee House, at 68, he has the energy of a man half his age, gesturing dramatically while he tells his family's story.

"My grandfather, Rudolph Hirt, came to Detroit in 1880 and worked for a while at the Michigan Stove Company. He was one of six boys raised in the Germanic northern part of Switzerland, from a family of poor farmers. Rudolph wrote back to them and said, 'I can make as much in a day here as you do in a week.'" Two more brothers came to Detroit.

The original Rudolph started a small business of his own, operating out of a stall at Detroit's farmers' market in Cadillac Square. DeVries points out, "He wasn't a 'junior' then. His mail started getting mixed up with mail going to another Rudolph Hirt who ran a milk company on Mount Elliott. So he cleared up the mix-up by adopting the business name R. Hirt Jr."

As DeVries tells it, Rudolph sat with his future wife Anna on a stone bench in a cemetery where the market now stands. Gazing across the headstones, he stared off at a modest house on what had been the nearby Riopelle farm, saying, "Anna, we're going to have a business there." Anna wasn't crazy about the idea of running a live-in business next to a cemetery, and said as much to her oldest daughter, who lived to be 90 and shared the story with DeVries, who got the impression "that grandpa was a little pitched. ... She was sorta thinking she shouldn't marry this guy because he's sitting in a graveyard and saying he's going to have a business here."

With his hard-earned savings, Hirt bought the farmhouse from a daughter of the Riopelle family, for whom Riopelle Street is named. He set up shop downstairs and moved upstairs with his wife.

The gamble was a good one. The city, needing room to grow, moved the dead elsewhere, creating a site for the market where Hirt had formerly worked downtown. And Hirt was right in the middle of the action. When the original house burned in a fire in 1892, Hirt rebuilt by 1893, raising the familiar 19th century facade with its parapets, pinnacles and colonnettes. A later expansion in 1904 more than doubled the building's size, and sales space overtook even the family's quarters, where the original wallpaper remained in situ for decades. Another 1904 innovation was the installation of an elevator; DeVries proudly says an inspector called it "the best-running of the oldest elevators in town."

Even in its early days, the store sold cheese, sometimes picking it up from the Gratiot Market tracks, loading it onto a horse and wagon, then passing it down through metal doors in the sidewalk to the cool basement. But as supermarkets overtook America after World War II, the Hirt company found its niche as a provider of boutique specialty items such as cheese, jams and other exotic foodstuffs, often shipped in from around the world.

What's more, the store stubbornly refused to modernize its operations. Instead of customers picking up their cheese and getting in line, customers would work with Hirt employees, who'd write up tickets and personally fill orders from behind the counter. Some enjoyed the quaintness, others submitted to it bemusedly, but such practices made Hirt stand out like a 19th century rowhouse in exburbia.

DeVries hopes to address some of the confusion when the store reopens, retaining some quaint practices, such as handwritten tickets, while adding conveniences to speed things up. Though patrons' tickets could be written up in a fine hand, there may be a scanner behind the counter ticking off SKUs — or stock-keeping units — to help with inventory. While he doesn't want to change the physicality of the experience, it can be improved with things like in-line ordering, samples to tide guests over while they wait, and trying to get rid of the challenging back-and-forth that shopping at Hirt's has typically involved. There are also plans to expand hours to attract after-work shoppers on weekdays, to court mail-order and online business, and some innovative ideas in the works for the upper floors.

But will the renovation harm the charm of the space? DeVries doesn't think so. He actually agrees with the wag who joked that "the store will be 'modernized' — from an 1891 format closer to a 1912 format."

DeVries says, "Some redesign is clearly needed." That said, he's bringing in people who understand what made the store special, including such cohorts as Kevin Hogan and former Russell Street Deli owner Bob Cerrito.

As the conversation goes on, it becomes obvious that DeVries is as much a fixture in the market as his family's store ever was. Once nicknamed the "Mayor of the Market," he still hangs around, whether he was running the shop or not, and getting teased about it by some of the market regulars.

"They tell me, 'You got nothing to do. So you go around bothering people!'"

Another business owner recently deadpanned to DeVries, "I never liked you. And I never thought I'd say this, but — I miss you. You brought us a lot of business over the years."

Clearly, a lot of affectionate ballbreaking goes on among the hawkers on Market Street, where a stubborn neighbor might mask his intentions by calling you a "pain in the ass." And it's obvious DeVries relishes it all.

That goodwill extends to the Eastern Market Corporation, which is happy to help DeVries keep the building in the family and on mission. The only catch is, DeVries can't call it R. Hirt Jr. anymore. That name belongs to the wholesale business behind the market on Chrysler Drive.

They've considered such names as 1887 Cheese Shop and DeVries Cheese Shop (duh-VREES really does rhyme with cheese). It's still a work in progress, and Team Detroit, via its relationship with Eastern Market, has stepped up to aid in branding. But, in the end, just as R. Hirt Jr. was oddly often called R.J. Hirt by locals, the official name may not even matter.

"Just like before, they'll call it what they want to," DeVries says with a chuckle.

The Rudolph Hirt, Jr. building is located at 2468 Market St. in the heart of Detroit's Eastern Market. Stay tuned for details ...