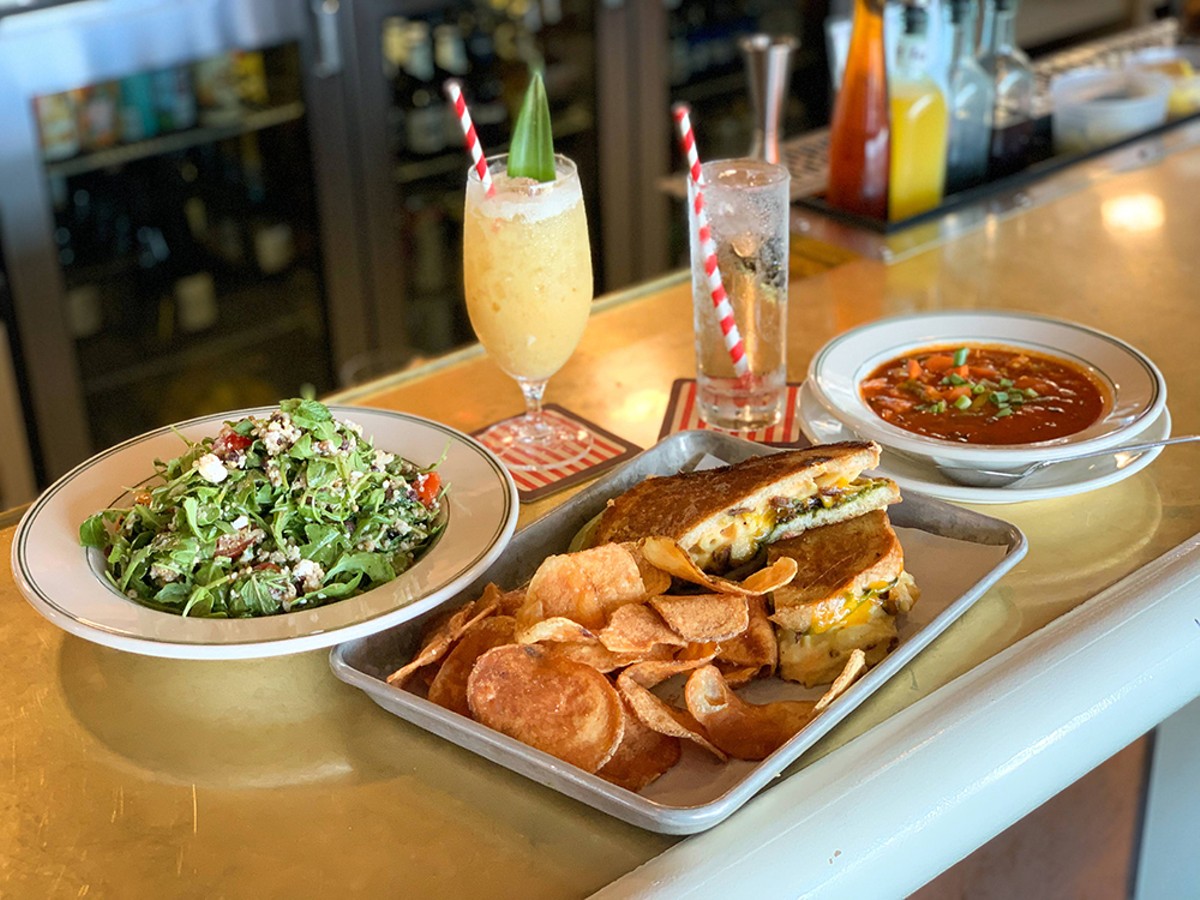 Seated across from Comerica Park, year-old Union Assembly is excellently placed to cater to downtown stadium-goers, and its menu reflects that, with an upscale bar food vibe that is augmented with modern offerings like a vegan quinoa-sorghum-brown rice-pretend-feta concoction.

I was predisposed to like the place just for its name. Years ago I had worked in a union assembly, at the long-vanished Fleetwood Plant on Fort Street, making Fisher bodies. Union Assembly is the first original inside-the-city venture of the Union Joints group, which includes “union” in the names of several of its nearly dozen restaurants. Co-owner Curt Catallo had two grandfathers in the UAW, and chose the union label for his restaurant group and for his ad agency, Union AdWorks, for its “egalitarian, all-are-welcome” air. He calls the fare “comfort food with a twist.”

The first time I went, though, I liked almost none of the dishes I tried. The second time, I liked all but one (the one being a mocktail). Flavors were mostly unsubtle: just Big Sweet or Big Salt, with little to differentiate them or liven them up.

Good news first, though: Union Assembly does a great job on its Detroit-style white pizza. (There are six pies to choose from, including a pastrami and a coney.) It’s not as tall as some, but the edges are properly crisp, and the ricotta, garlic confit, and chili flakes do the opposite of what I said about the menu in general — they combine subtly for a quite original flavor profile, and the four slices are heaped high with arugula.

Also excellent were wild mushroom pesto tagliatelle, one of seven mains, with three kinds of mushrooms, baby kale pesto (how precious; usually I stay away from kale in its natural state), charred tomatoes, and a creamy sauce involving roasted garlic. Even my not-a-mushroom-fan companion was scarfing this luscious, lemony, woodsy mixture.

And charred broccolini with chili flakes and slices of preserved lemon were crisp and way spicy.

I can hear some readers turning the page. “This lady orders broccolini and an arugula pizza in a bar; she loves it and then complains about the bar food? Forget her and the horse she rode in on in.” I refer those readers to the many bar-food and upscale-bar-food restaurants I’ve reviewed and loved. Such familiar fare can be done well, but in Union Assembly’s case it was actually the more hoity-toity dishes that made my grade.

Perhaps the worst was onion soup — thick as a smoothie and just salty, except for the candied bacon on top, Candied bacon, really? A Caesar salad was also salt-forward, with no apparent dressing, just lots and lots of cheese. Collards were better, deep flavored and spicy hot with lots of chewy meat.

A Reuben sandwich, one of six “hand-helds,” was not too bad, though nontraditional pickles drowned the flavor of the very soft corned beef. A maple sausage roll was, you guessed it, too sweet, as the word “maple” should have warned me. Some nondescript “country gravy” didn’t help.

One of the chef’s boldest moves in the direction of “can you top this?”, in the same ballpark as fried chicken between doughnuts, but vegetarian, is a Mac Melt. That means a mac-and-cheese sandwich, noodles on bread, perfect for those training for a marathon. It does include that baby kale pesto that I liked — plus pimento spread, plus shiitake bacon. It all blends into one carbohydrate experience.

Perhaps one problem is that Union Assembly’s menu is just too long. It’s hard to do all those things right, reaching across genres. There’s a bargain $8 kids menu, with the versions of grownup food that kids are presumed to like, including spaghetti and meatballs. They can choose celery sticks with their cheeseburgers! There’s more: the restaurant worked with Tigers catcher Eric Haase to create a drink-and-dinner special, the proceeds of which go to two charities, the Detroit Tigers Fund and CATCH. The dinner puts ground beef and brisket, with garlic ricotta, on a pretzel bun. The drink is called Mr. Gatorade, which is where Mr. Haase lost me.

The beer list ranges from PBR through some hard seltzers and the usual Michigan brews to a Pennsylvania IPA that is “hopped and double dry hopped aggressively” and described as “fluffy, pillowy, juicy, dank.” The “Darko Milicic” mocktail I ordered promised apricot, ginger, rosemary, and lemon but tasted only of sugar water.

On one of my visits, the 500-seat Union Assembly was packed with happy Tigers fans, our team having just shut out the Angels. The lower floor was pleasantly wide open to both sidewalks on Woodward and Columbia, and the view from the second floor included the ballpark itself. The second-floor terrace has heaters so as to be friendly in three seasons.

Union Assembly occupies prime real estate within blocks of three stadiums and between the Fox and the Fillmore, and it makes sense to put a family-friendly sports bar there.

When she's not reviewing restaurants, Jane Slaughter also writes about labor affairs, having co-founding the labor magazine Labor Notes. Her writing has also appeared in The Nation, The Progressive, Monthly Review, and In These Times.
More
Scroll to read more Restaurant reviews articles
Join the Metro Times Press Club