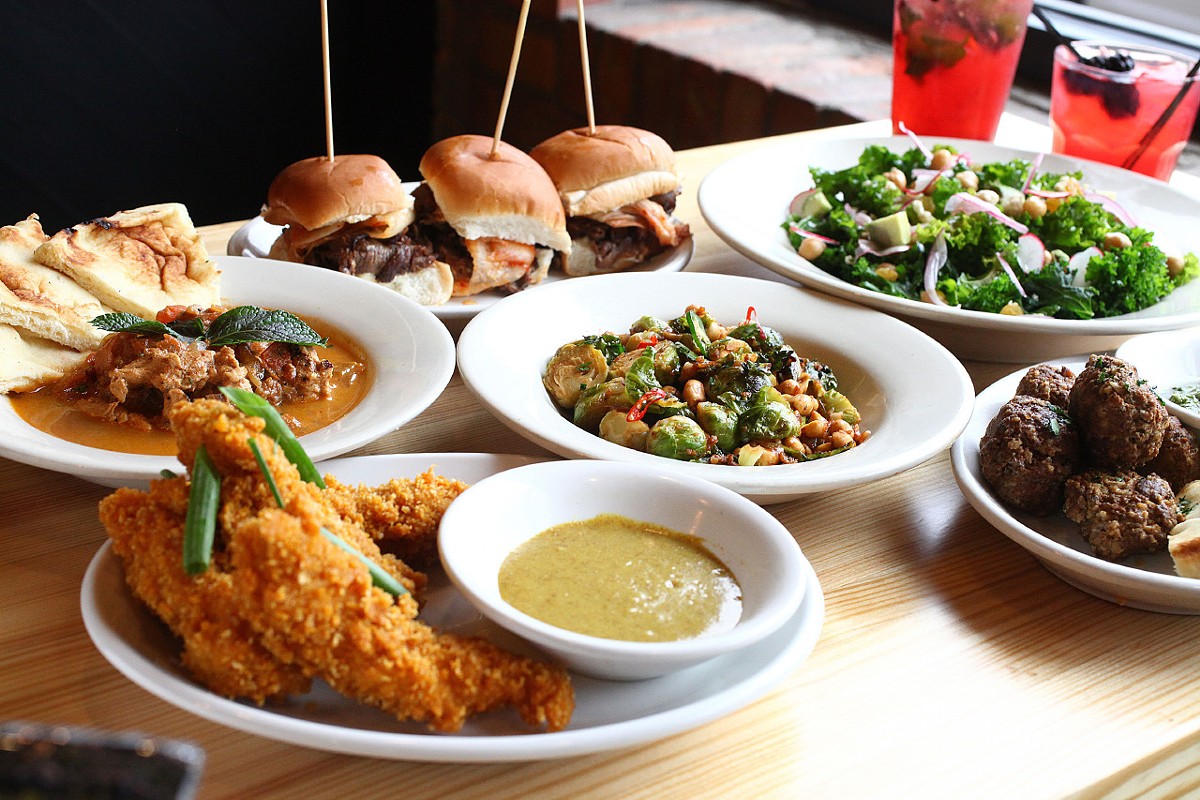 If ever there were to be a Taste of Detroit, in similar fashion to the food fest in Chicago, we would venture to argue that it should be held in Corktown. Bobcat Bonnie's is just the latest to throw its apron into the party.

Bonnie's sits inside the former O'Blivion's pub, which took its last gasp of old Corktown breath last year. Former Gold Cash Gold general manager Matthew Buskard launched the spot in August to serve as kind of an in-between destination. Not quite white tablecloth, but also not sticky floor-dive. A gastropub, friendly to the stroller set where young parents can bring the wee ones in and keep them entertained at the pinball machines while mommy and daddy enjoy splashy, fruit-infused mixed drinks and a mix of New Americana bites.

The cocktail offerings tend to the fruity side, such as the signature Bonnie (Ole Smoky Moonshine, Bulleit Bourbon, blackberry simple syrup and lemon juice) and the berry mojito (with actual bits of raspberry, blackberry, blueberry). Buskard says he wants cocktails at Bobcat Bonnie's to appeal to those who may not want an Old Fashioned or Manhattan, but instead something more fun that doesn't overwhelm the senses. Of Course, if these spiked punch-style drinks don't work for you, though, the bar also offers more than 10 craft and domestic beers on draft, nearly 30 styles of bottles or cans of brew, and a variety of wines.

As for the food, the menu focuses on shareable bites with a welcome emphasis on vegetarian options. Chef Beren Ekine-Huett, who hails from Portland, Ore., told us before the place opened that she wanted to offer diners options that would satisfy meat eaters and veggies alike, without making people feel like they have to pick one side or other. In a city that up until the last few years had only a few herbivore-friendly establishments, this is a welcome proposition. What's more, the meals, all priced from $3-$5 for bar snacks, $8-$11 for shared plates and sandwiches, and $12 for entrees, are at points that most folks can manage. After all, some people want healthful, leafy greens without having to give up all the green from their wallets.

Perhaps the most exciting of the vegetarian options come from the mushroom ceviche. If you've ever had authentic Mexican or Latin American ceviche, you're well aware of that tangy bite that comes from a strong presence of lime and cilantro. Mixed in a bath of pico de gallo-style fixings, traditional ceviche comes packed with a variety of seafood, with each bite boasting a citrusy kick. Ekine-Huett captured that perfectly with her ceviche version, the mushroom working as a chewy and delightful alternative to the mariscos. Ekine-Huett also draws from Asian traditions with the Brussels sprouts transformed in a meatless interpretation of Kung Pao chicken. They come packed with tear-inducing chili peppers and crunchy peanuts and make for a powerful starter.

If you spring for meat selections, the classic Korean-inspired Bulgogi beef sliders come topped with house-made kimchee, a rarity in a gastropub environment, which otherwise might be inclined to spring for the jarred variety. The lamb meatballs offer a punch of cuminy flavor, accented with cilantro and paired with naan bread. Similar flavors can be found in the Chicken Tikka Masala, which some say might lay a little too heavy on the cumin and not enough on the creaminess that's often associated with the Indian entrée. If you're like us, you'll appreciate that it's not reliant on that milky or oily texture you tend to find in Indian takeout and enjoy the depths of flavors in a style of cuisine you don't normally find on a bar menu.

Those aforementioned leafy greens — they're big enough to be enjoyed on their own as an entrée. The kale salad is unlike the traditional sweet variety, registering tartness instead thanks to a splash of red wine vinegar and the use of golden raisins. We also sampled the Panzanella Salad, which, while flavorful enough with basil, capers, and tomato vinaigrette, was overtaken by huge baguette slices that would have been better served as a side on a separate plate. It's evident that the kitchen has been mindful of diners' reactions because adjustments are being made as they go along. For instance, when we returned in a following visit, the Panzanella was gone.

The kitchen also takes care to stay true to its bar food roots, with a hefty burger menu (and if you visit on Mondays, you'll be treated to a $10 special, which includes your choice of one of six burgers, fries and draft beer). We recommend the half-pound Bobcat Burger (topped with cheddar, BBQ sauce, and a massive battered onion ring inside a thick bakery bun).

We rounded out dinner on one trip with a slice of never-disappointing pie a la mode from Sister Pie. We had a super tart piece of plum that was perfectly matched with crumbly crust and a heaping scoop of Hudsonville vanilla. Buskard says the pie choice rotates regularly. The dessert menu also includes Dilla's Donuts and Faygo floats — nods to Detroit-based treats.

Dining options in the neighborhood are growing up along with the millennials who've taken residence in the area in recent years. It's not high-end or simplistic, but filled with layers from which to choose. And Bobcat Bonnie's proves that there's an appetite for accessible yet still innovative gastropub selections.