Formerly known as Kenilworth Cafe, the Black-owned shop reopened with a better name 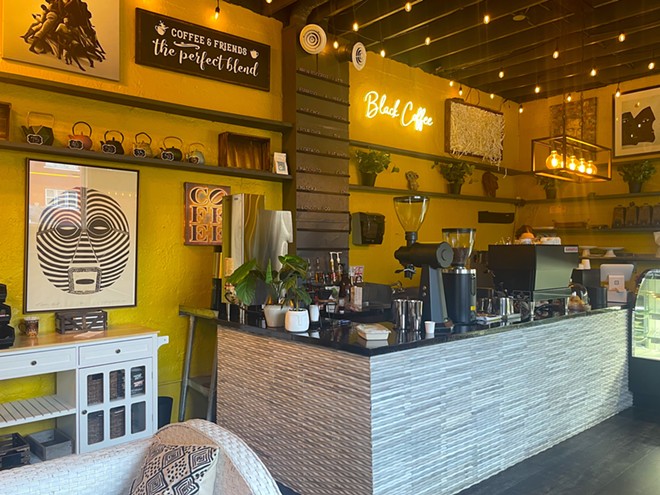 Black Coffee Cafe is a cozy new-ish spot for coffee and coworking with Afro-centric sweets and decor. We say new-ish because it opened at the corner of John R and Kenilworth St. around a year ago, was open for six months, then closed for a few months when one of the partners got sick and they couldn’t keep the place staffed.

Back then it was called Kenilworth Cafe, though owner Steven Harris always wanted to use the Black Coffee name.

“I partnered with someone who thought it may have been offensive,” he says about the name. “So I said OK, let’s just call it Kenilworth Cafe since it’s on the corner of Kenilworth. But then I teamed up with some other people they were like no, that’s perfect — people like their coffee black and it’s good for marketing, so that’s when I went back to Black Coffee.”

Harris describes Black Coffee Cafe as a “hardcore coffee shop with very high-end coffee” sourced from Africa. While the main offering is a pour-over with beans from Kenya, Ethiopia, and Uganda, the shop has all the typical lattes (yes, even pumpkin spice in the fall) and is working with local businesses Baobab Fare and Konjo Me to sell their coffee as well.

African art, masks, and mud cloths decorate the quaint shop, making the seating area feel like a warm living room, and the display case is filled with pastries, vegan samosas, and Kanya, a gluten-free West African cookie made from rice flour and nuts. The cafe also serves breakfast croissants and deli sandwiches.

Harris partnered with Godwin Ihentuge of YumVillage fame to reopen the shop under its original moniker.

“We’ve had some Afro-Caribbean style frittatas and teff muffins. We’re just kinda experimenting and trying stuff out,” Ihentuge says. “Our focus is to be a coffee shop with elements like Rose’s Fine Food where you can come and get a deli-style sandwich or salad with an Afro-Caribbean lens. In the spring we’re gonna start to do more brunch.”

Behind the shop is a large green space the pair hope to activate with live concerts, poetry nights, and other community events in the warmer months. Harris, who is an architect, plans to outfit the space with around 35 shipping containers arranged in a horseshoe around a stage. 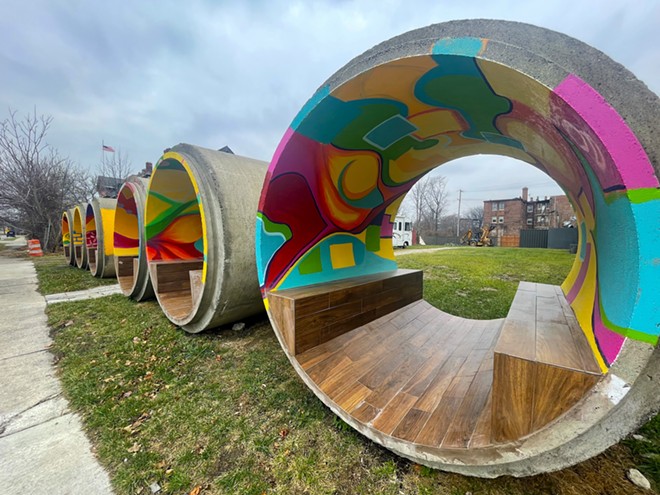 Along the edges of the grassy area is a row of co-working cubbies fashioned inside storm drains that Harris designed with murals from Detroit artist Demien De Yonte. Their open-air design doesn’t allow for winter use, but WiFi is available if you wanna get some work done in the summer sunshine.

Black Coffee Cafe adds to the community feel of the surrounding neighborhood where several Detroiters are working toward independence, food sovereignty, and equity.

Oakland Avenue Urban Farm, which runs Detroit’s first community land trust and co-facilitates the Detroit Black Farmer Land Fund is down the street. Harris owns the whole block of restaurant and retail space where Black Coffee Cafe is located, some of which he runs himself and others he rents out to local tenants. The block is wired with free community internet via the North End Woodward Community Coalition’s Equitable Internet Initiative.

Harris’s other businesses on the corridor include Byrd Social Lounge and Rosemary’s Kitchen, which he’s opening with the help of Chef Max Hardy from Coop Detroit.

Byrd’s is a members-only hangout, but Harris plans to open it to the public as a cigar lounge by next year.

Rosemary was slated to open this year but also had difficulty keeping staff like most restaurants post-pandemic. Harris plans for the elevated soul joint with steaks, hot honey fried chicken, turkey chops, and burgers to be fully operating by January 2023.