Photo by David Martin
The 1950s was a golden age in the United States of America. Women got to wear those big skirts, you could light up literally anywhere, and it was still perfectly fine for your kids to inhale your second-hand smoke while drinking soda all day.

Alas, gone are those good old days. But, we can harken to those simpler times by bringing back those enormous calf-length frocks and by cooking with Vernor's using some vintage recipes that the Henry Ford so generously posted on Pinterest in honor of the company's 150th birthday.

The recipes come from a cookbook published by Vernor's in the '50s, which proudly claims that "Doctors and dietitians approve Vernor's ginger ale. It is pure and wholesome. It is the healthful beverage ginger ale that has won the preference of children and grown-ups alike."

And we all know that the 1950s were the pinnacle of medical science and research. Weren't doctors still prescribing cigarettes back then? 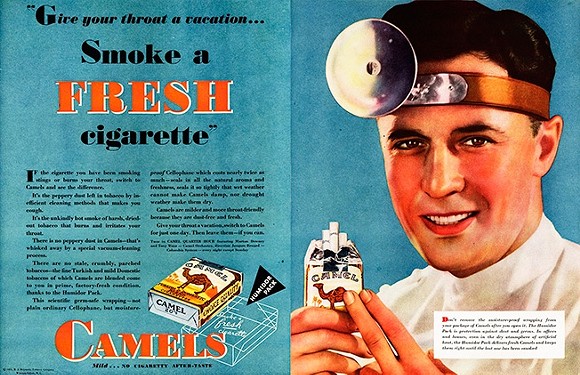 This is really neither here nor there, but what why did they wear that headband thing?
Dinner recipes include a Vernor's Ginger Ale Fruit Salad, which for some reason also involves gelatin? Also, lowkey the Vernor's Frozen Fruit Cocktail sounds amazeballs. 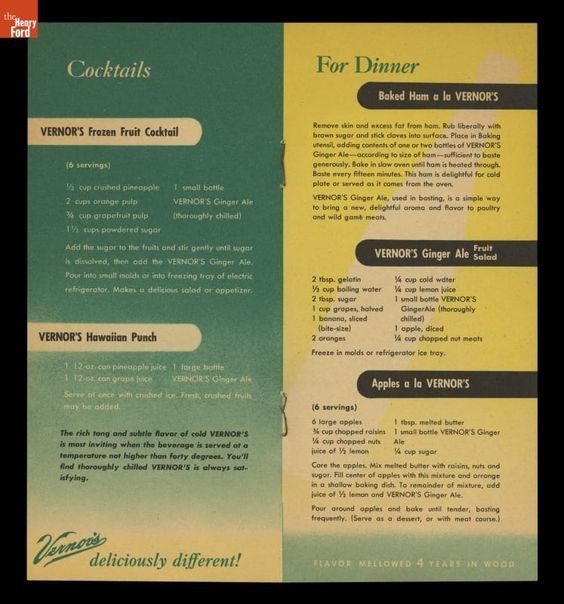 The recipe book is also chalk full of fun phrases like, "Perfect taste with a tradition," "Deliciously different," and "Easy to make, delightful to taste" and it beckons readers to share their unusual Vernor's-inspired recipes with the company for possible inclusion in future editions. 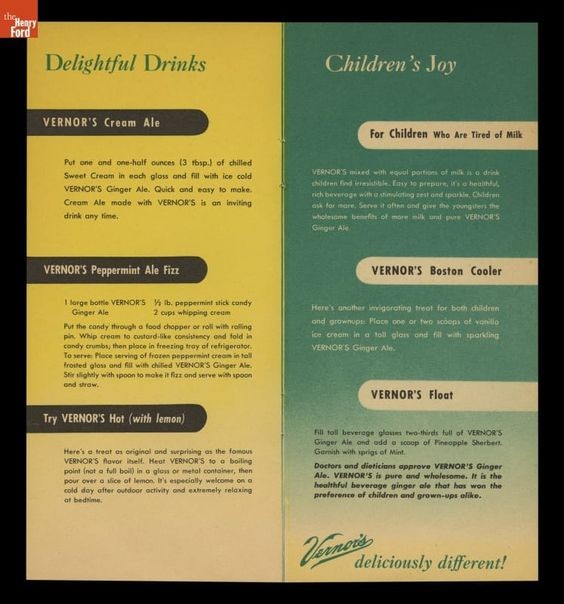 The pamphlet includes ideas for dinner, drinks, snacks, and desserts with a special section on treats for the kiddos. The "Children's Joy" section comes with a suggestion to mix Vernor's with equal parts milk for a "healthful, rich beverage with a stimulating zest and sparkle."

Gluten-free, non-GMO, organic, cage-free, grass-fed moms everywhere are all like
For snacks the cookbook suggests making a "pleasingly different" frosting by mixing 2.5 cups of confectioners sugar, a quarter cup of cocoa, half cup of cream, butter, and hot Vernor's.

Meanwhile, more gelatin is suggested for dessert. Using Vernor's instead of water with any regular gelatin of jello will give your desserts unusual appeal. Everyone knows that.