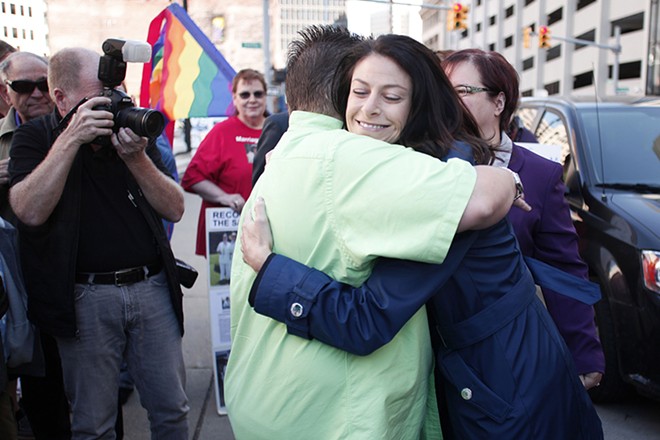 Bill Pugliano/Getty Images
Michigan Attorney General Dana Nessel played a pivotal role in the fight to legalize gay marriage. That could all come undone if Roe v. Wade is overturned.

When the court's draft decision to end the recognition of abortion rights was leaked on May 3, supporters of gay rights were alarmed by the potential wide-reaching impact of the legal rationale used in the ruling.

That includes Michigan Attorney General Dana Nessel, who is no stranger to gay rights. Before she became attorney general, Nessel, who is gay, successfully argued in 2014 for a marriage equality case — DeBoer v. Snyder — which was appealed to the Supreme Court under Obergefell v. Hodges, the 2015 case that legalized same-sex marriage nationwide.

"This will have all kinds of repercussions," Nessel tells Metro Times. "I see an entire series of very important and well-established Supreme Court opinions that created fundamental rights collapse."

In Roe v. Wade, the justices said the "fundamental right to privacy" under the 14th Amendment protects the right to an abortion.

In Obergefell v. Hodges, justices voted 5-4 in favor of the plaintiffs, holding that bans on wedlock violated the Due process and Equal Protection clauses of the 14th Amendment.

The 14th Amendment was adopted in 1868 and has been used to affirm a variety of constitutional rights, from interracial marriage and contraception to gay intimacy and same-sex marraige. Although they aren't explicitly mentioned in the Constitution, they were considered "substantive" due process liberties.

But in the latest abortion case, Alito, who dissented in the same-sex marriage case, fervently disagreed that the 14th Amendment protects the right to abortion, saying it's not directly outlined in the Constitution.

"Roe was egregiously wrong from the start," Alito wrote in the draft decision. "Its reasoning was exceptionally weak, and the decision has had damaging consequences."

Alito further argues that rights not outlined in the Constitution must be "deeply rooted in American history and tradition."

"Until the latter part of the 20th century, there was no support in American law for a constitutional right to obtain an abortion. Zero. None," Alito wrote.

The same could be said of same-sex marriage and gay intimacy.

During arguments in the latest abortion case, Justice Sonia Sotomayor echoed concerns that overturning Roe v. Wade could have widespread implications for other rights, including contraception and same-sex marriage.

If Obergefell v. Hodges is overturned, same-sex marriage would once again be illegal in Michigan because voters approved a constitutional amendment that banned gay marriage in 2004.

By applying the same logic in the abortion case to the sodomy laws, Nessel says it's entirely possible that Michigan could once again jail gay people for having consensual sex.

In Lawrence v. Texas, police entered the home of John Lawrence, who is gay, and found him having consensual sex with another man. He was arrested and charged.

In a 6-3 decision, the Supreme Court relied heavily on the 14th Amendment's Due Process Clause to strike down the law.

"The issue is whether the majority may use the power of the State to enforce those views on the whole society through operation of the criminal law," wrote Justice Anthony Kennedy, a prominent defender of LGBTQ rights.

The answer, he said, was resoundingly no.

Kennedy retired in 2018 and was replaced by consertative jurist Brett Kavanagh, who joined Alito in the draft opinion in the latest abortion case.

In Alito's draft opinion in the latest abortion case, he insisted that the legal reasons for overturning Roe v. Wade don't necessarily apply to other cases.

"To ensure that our decision is not misunderstood or mischaracterized, we emphasize that our decision concerns the constitutional right to abortion and no other right," Alito wrote. "Nothing in this opinion should be understood to cast doubt on precedents that do not concern abortion."

Despite Alito's assurances, the same legal reasoning could be used to roll back other rights, legal experts say.

"I don't believe that for a second," Nessel says of Alito's assurances. "Once you start eviscerating 14th Amendment rights, I don't see how you separate them."

In Alito's dissenting opinion in Obergefell v. Hodges, he wrote that the 14th Amendment only protects rights deeply rooted in U.S. history and tradition.

"And it's beyond dispute that the right to same-sex marriage is not among those rights," he wrote at the time.

Alito and conservative Justice Clarence Thomas also referenced gay marriage when the court refused to hear an appeal from a county clerk who had been sued for refusing to issue a marriage license to same-sex couples in 2020.

"In Obergefell v. Hodges, the court read a right to same-sex marriage into the 14th Amendment, even though that right is found nowhere in the text," they wrote.

It's still too early to know whether the current Supreme Court would overturn Obergefell v. Hodges. Three of the four justices who dissented in that case are still on the court. The three other conservative justices were appointed by President Donald Trump.

"If a court can just decide they don't like something and therefore are going to use a decision to overrule a past precedent, I believe anything is up for grabs," Jay Kaplan, staff attorney for the ACLU of Michigan's Nancy Katz & Margo Dichtelmiller LGBT Rights Project, tells Metro Times. "The LGBTQ community has to be concerned about this."

"Mark my words: They are going to go after the Supreme Court decision on same-sex marriage," Biden said.

Attacks on the state level

LGBTQ rights are also under attack by Republican state legislators. In Michigan, Republicans introduced a bill in May that would ban transgender athletes in high school from participating in sports that align with their gender identity.

The bill's sponsor, Sen. Lana Theis, R-Brighton, suggested during an invocation on the Senate floor in April that "children are under attack" becuase of lessons about racial equality and LGBTQ issues. Later in the month, she falsely claimed in a fundraiser that Democrats want to "groom and sexualize kindergarteners" for supporting LGBTQ discussions in schools.

At local school board meetings, some parents are angrily demanding that teachers stop discussing LGBTQ issues.

"The war against LGBTQ in Michigan and America is already raging. It's unfortunately reached a feverish pitch," Erin Knott, executive director of Equality Michigan, an LGBTQ civil rights organization, says. "What we are seeing right now is absolutely a throwback to the 1970s and 1980s. The playbook of hate is being played again."

The only reason the bills aren't passing, Knott says, is because Gov. Gretchen Whitmer has pledged to veto any anti-LGBTQ legislation.

"The last defense we have is Gov. Whitmer, who has been a staunch supporter of the LGBTQ community," Knott says.

Whitmer is running for reelection. Of the large field of Republicans running in the primary for a chance to unseat Whitmer, many have made disparaging remarks about the LGBTQ community.

"There is a lot to be concerned about," Kaplan says. "Elections have consequences."

LGBTQ supporters don't have to sit back while their rights are under attack, Nessel says.

To protect same-sex marriage, supporters can gather petitions for a ballot initiative to amend the state's constitution, Nessel says. She also encourages voters to turn out in big numbers to support candidates who defend LGBTQ issues.

"We have to be prepared state by state to fight it," Nessel says.

Kaplan adds, "There is a lot at stake for Michigan's LGBTQ people. The stakes couldn't be higher."

Where to celebrate Pride 2022 in metro Detroit