Where to celebrate Pride 2022 in metro Detroit 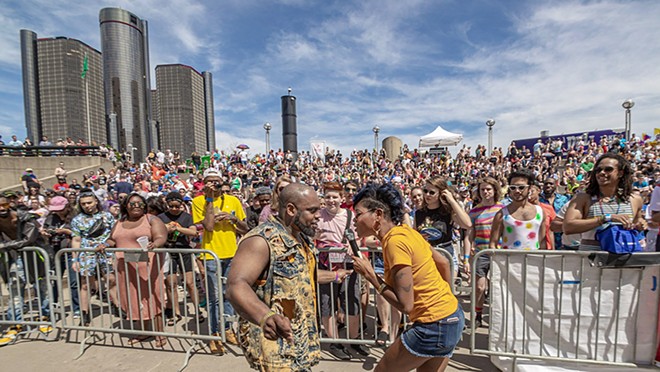 For the last two summers, Pride has been modified to adjust to the ever-changing climate of the pandemic. Well, outside is back open and there are a lot of reasons to celebrate.

While June might be Pride month, the celebrations are not limited to just those 30 days. They stretch across three months — meaning everyone can dance and celebrate their authentic selves all summer long.

So put together your best summer look and get ready to hit the streets. Here are a few Pride celebrations happening in metro Detroit.

Ferndale Pride is not just a one weekend affair, it lasts the entire month of Pride.

Things kick off with the return of Rainbow Run, a spirited 5K race where participants get sprayed with colored, non-toxic powder as they complete the course.

Local Ferndale favorites Bobcat Bonnie's, Ferndale Project, The Fly Trap, Pop's For Italian, and One Eyed Betty's get in on the action hosting brunch specials in support of Ferndale Pride.

Other events throughout the month include Bears in Speedos, a car wash fundraiser that supports the Ruth Ellis Center and Affirmations. A kid-friendly Drag Queen Storytime at Ferndale Project, and an Open Mic Storytelling are also slated to happen during the month.

For a complete list of events including time, dates, and locations, see ferndalepride.com

Ortonville is getting its first Pride event, and it's all thanks to a high school sophomore. Abigail Rowe started Abigail's Pride because she realized there weren't any Pride celebrations near her hometown.

The family-friendly "extravaganza" will start with a parade through downtown Ortonville leading into a festival that will have food trucks, live music, and a booth giving free hugs from moms and dads. Kids will be treated to their own kiddie carnival that will feature face-painting, rock painting, and a chance to take photos with princesses.

There will also be access to counselors on-site at the festival.

Abigail's Pride will be on Saturday, June 4 in downtown Ortonville. The parade will begin at 11 a.m. with the festival following immediately after.

Downtown Detroit will be painted with rainbows and love as Motor City Pride festival and parade returns to Hart Plaza.

Last year, festival goers found themselves partying in September as Michigan's largest Pride celebration had to postpone its events due to the pandemic.

This year, Motor City Pride is back in June, just in time for the organization's 50th anniversary.

The festival will be headlined by R&B, soul, and funk singer Jody Watley. Watley got her start with the funk band Shalamar in the late '70s before branching out into her own successful solo career. The "Looking for a New Love" singer will take the stage at 7:30 p.m. on June 11 on the Pride Stage.

On Sunday, June 12, the Motor City Pride Parade will march through the streets of downtown Detroit.

The city of Berkley is celebrating with its first official Pride event. The inaugural Berkley Pride Block Party will kick off in downtown Berkley and give party goers a retro feel.

Berkley Pride Block Party will be from noon-4 p.m. on Saturday, June 26, on Robina Ave. just north of 12 Mile Rd. The event is free and will also offer free parking in downtown Berkley. For additional information, visit downtownberkley.com/berkleypride.

Yes, Pride is technically in June, but why should the celebrations stop there?

For more than 20 years, Hotter Than July has celebrated Detroit's Black LGBTQ community. Last year's events were virtual, but this year they are back in person and, dare we say, hotter than before. The weekend opens with a candlelight vigil, endorsed candidate forum, and an art show on July 15. On Saturday, July 16, Hotter Than July will take over MotorCity Sound Board as Grammy-award winning rapper Da Brat will serve as this year's concert headliner. The weekend concludes with a worship service and brunch.

A testing zone will be available on site all weekend as well.

Tickets for Hotter Than July presents Da Brat at MotorCity Sound Board begin at $41 and are available on Ticketmaster.com. For a complete list of events, including times and locations, see lgbtdetroit.org/hotterthanjuly.

Royal Oak Pride might be one of the later Pride events of the season, but that doesn't mean you should count it out.

On Friday, August 12, festival goers can see Ru Paul's Drag Race alum Nina West perform in all of her glory. On Saturday, August 13, R&B singer Deborah Cox will headline the evening. There will be a Metro Detroit Drag Showcase both nights and a Donna Summer Tribute by Rainere Martin is slated for Saturday evening.

Event details are still being released for this event. To follow event updates, see facebook.com/RoyalOakPride.

*A previous version of this story stated that a testing zone would only be available on Sunday during Hotter Than July, that has been corrected.

Born and raised on Detroit's Westside, Alex Washington is about as Detroit as they come. She judges your coney island order and serves a mean side-eye when anything across Eight Mile is called "Detroit." Her writing has been published in Real Detroit Weekly, The Detroit Free Press, Model D, BLAC magazine, and...
More
Scroll to read more Pride Issue articles
Join the Metro Times Press Club