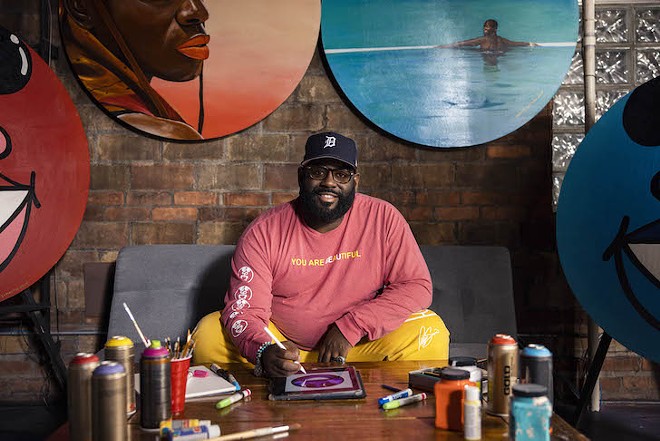 Courtesy of Rocket Companies
Artist Phil Simpson reminds us to keep smiling and believing in optimism.

When God or whoever is out there made Detroiters, they sprinkled ingenuity on top of heaping amounts of creativity, grit, and talent. Our city is abundant with artists who fuel the city’s creative undertow, from painters to poets and performance artists and everything in between. This feature will highlight a different artist each week. Got someone in mind you think deserves the spotlight? Hit us up at [email protected].

Artist of the week: Phil Simpson

Phil Simpson is always smiling. Not only does he appear in a perpetual positive mood, but his iconic smile paintings also spread joy across the city.

His signature style — brightly colored smiley faces with big cartoon eyes and that little loop on the nose — is impossible to look at without smiling.

They’re simple but the nostalgic, childlike feelings of wonder and play in his paintings are what make them so popular.

It’s the type of bursting sunshine you need to warm weary bones on a dreary day, like a rainbow that appears in a puddle of oil on asphalt. And we could all use a touch of joy and happiness in this fucked up world of nonstop chaos, confusion, and stress we live in.

It’s hard to fathom something so uplifting being the center of controversy, but Simpson became a target when a temporary banner featuring his work covered Robert Wyland’s longstanding whale mural on the Broderick Tower in downtown Detroit late last year.

Wyland threw a fit when the Rocket Companies-sponsored banner featuring 10 of Simpson’s colorful smiley faces and proclaiming “Detroit is Home” went up over his work. Some butthurt suburbanites also resorted to attacking Simpson’s work online.

Instead of responding to the negative comments, Simpson took it in stride telling people to “keep Smiling and keep believing in Optimism” instead — though he did make a cheeky clapback at the whole situation with his fine art exhibition at New Center coworking space Chroma, which he titled Oh, Whale! 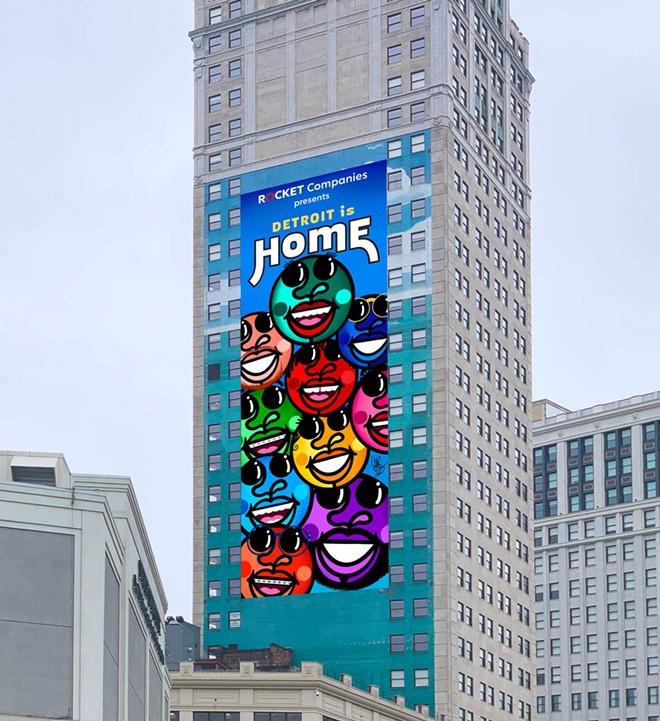 While the exuberant smile is his most recognizable symbol, Simpson sometimes paints other subjects too.

A portrait of his wife hangs in the permanent collection of Neiman Marcus at the Somerset Collection, next to a framed cutout of his Metro Times feature from earlier this year, no less. His most recent exhibit at record store and techno hangout Spot Lite features the smile alongside stunning paintings of Detroit travel influencer Jessica Nabongo, who is reportedly the first Black woman to visit every country in the world.

In 2009 Simpson opened Freshman Clothing, a menswear clothing store a few blocks away from Broderick Tower where his work smiles over Detroit, but it closed a few years later. His signature smile was born shortly after.

He’s since participated in Murals in the Market and BLKOUT Walls Festival, and also painted the basketball courts at the Monroe Street Midway. He even now has his own lifestyle clothing line, The Smile Brand (because what else would it be called).

Through it all Simpson reminds us time and time again to dream big, never let anyone steal your joy, and fuck the haters.