The artist covers the city in color 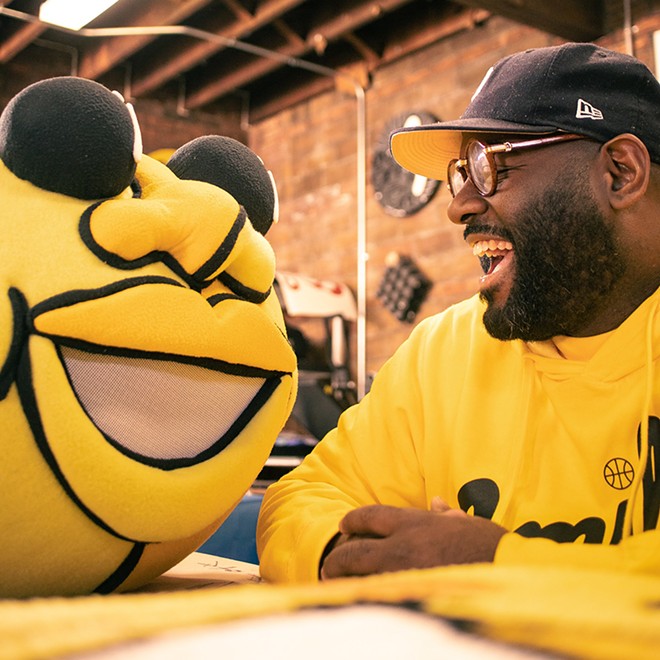 It’s a sunny day on Detroit’s east side when I meet Phillip “Phil” Simpson at his second-floor studio.

The artwork in his studio is as colorful as the smiles he’s been known to paint around the city of Detroit. A few of the canvases are adorned with his signature smiley face, while others are paintings of Black women or the logo for what used to be the store he owned nearly a decade ago.

Donning a paint-splattered Carhartt apron, he excitedly shows me around his work space.

“You’re one of less than 50 people who have been to this space,” he says.

There’s been a lot of chatter about Simpson’s artwork in recent months, not because of his skill or upcoming projects, but because his collage of smiles is temporarily covering Robert Wyland’s “Whaling Wall” mural on Detroit’s Broderick Tower.

Rocket Companies purchased the advertising space on Broderick Tower and commissioned Simpson to be the Detroit artist to design the image that would temporarily cover the whales.

Simpson took to social media to share his excitement once the artwork was unveiled in November 2021, writing in an Instagram caption: “I hope this installation brings you joy. I tried my best to abstractly represent everyone. Keep Smiling and keep believing in Optimism.”

Simpson wasn’t the only person sharing thoughts on social media. The artwork was met with some backlash initially, which only grew online once Wyland began to express his disdain that his mural had been covered after nearly 25 years on the downtown building.

A post shared by Art By Phillip Simpson (@artbyphillipsimpson)

Simpson says he’s been advised against discussing the backlash he’s received from his artwork covering the whales, but the silence and energy shift after saying that was loud and clear.

While he might not be able to speak on the backlash, his friend and mentor Distinct Life’s Rick Williams did. Williams stands in support of Simpson, not just because he’s his friend, but because he says Simpson has been a real beacon since he’s known him.

“Phil has remained a consistent source of positivity when things weren’t looking up,” says Williams. “Anybody can draw a smiley face, but everybody is not Phil. Everybody doesn’t have that spirit, Phil really embodies the Smile brand and believes in what he’s pushing.”

If you were out in Detroit a little over 10 years ago, you wouldn’t find Simpson working in a small studio — you would’ve found him working at the now closed Freshman Clothing store. In collaboration with friend and fellow artist, Eric Lowry, the pair operated Freshman at 204 E. Grand River Ave., only a couple of blocks away from where Simpson’s artwork now drapes Broderick Tower.

“I came up with this crazy idea. I had met Eric at [Royal Oak sneaker store] Burn Rubber and I wanted him to be the captain of the skate team I was trying to build — kind of like [streetwear and lifestyle brand] Ice Cream,” Simpson said. “He hit me with ‘yeah, I skate but I actually want to be a part of this, I want to run the business. Let’s do Freshman together.’”

While Freshman Clothing may have been the place Simpson and Lowry sold their streetwear fashion brand and art, it really became a community hangout for young Detroit creatives and artists.

Freshman was short-lived, though. The store closed its doors in 2011 after two years on E. Grand River. The closure hit Simpson hard, and amid all of the feelings about that, his artistic signature was born.

“Smile started in 2012, the year after Freshman closed. That was the year everything changed for me,” says Simpson.

For a few years after Freshman, Simpson continued to develop his Smile brand while figuring out his next steps. During this time of struggle, stress, and mental anguish, Simpson built a relationship with the person he says changed his life the most — his now wife, Syretta.

The sense of community that Simpson created on the strip in Harmonie Park carried over to The Baltimore Gallery in the Milwaukee-Junction neighborhood, where he served as gallery director from 2015 through the space’s closing in 2019.

“Smile started in 2012, the year after Freshman closed. That was the year everything changed for me,” says Simpson.

While in that space, Simpson converted his office to his own mini-Smile brand pop-up shop.

“When the Baltimore Gallery opened, I turned my little office area into a Smile store for a while,” Simpson says. “It didn’t quite work like I needed it to, but it was nice.”

By the time the gallery closed, Simpson saw his life looked a little different. He and Syretta had married and had a new baby, and Simpson had become a notable figure in the Detroit art scene. Simpson continued to work as a commissioned artist throughout the metro area, participating in Murals in the Market, the City of Detroit’s City Walls, and in 2021 was commissioned to design the mural for the basketball courts at downtown’s Monroe Street Midway.

Things came full circle in the fall of 2021, when Simpson was commissioned to do a painting for an event at Neiman Marcus in Somerset Mall. Instead of painting his usual smile portrait, he chose to paint a picture of his wife wearing the store’s most expensive earrings.

“She’s hanging in Neiman Marcus with a pair of earrings that we would probably never buy even if we were able to afford it, it’s just the fact a painting of my Black queen is hanging in Neiman Marcus,” says Simpson. “It meant so much to us and our families and our daughters to see their mother in the store, the same place I used to catch a bus and window shop when I had a moment.”

Simpson gets to relive that feeling all over again on June 17, when his Smile Land opens in that same Neiman Marcus. The boutique inside of the department store will offer a unique Smile brand shopping experience in the metro area’s luxury mall.

“This is different from Baltimore, this is a real retail shopping location,” Simpson says. “It’s a destination. I want you to get off the escalator and just notice that this energy is for you and it’s something special.”

The Smile Land grand opening will be from 5-8 p.m. on Friday, June 17 at Neiman Marcus at the Somerset Collection, 2705 W. Big Beaver, Troy.