From a park dedicated to Charles McGee to the return of BLKOUT Walls, the new year is looking pretty sweet already 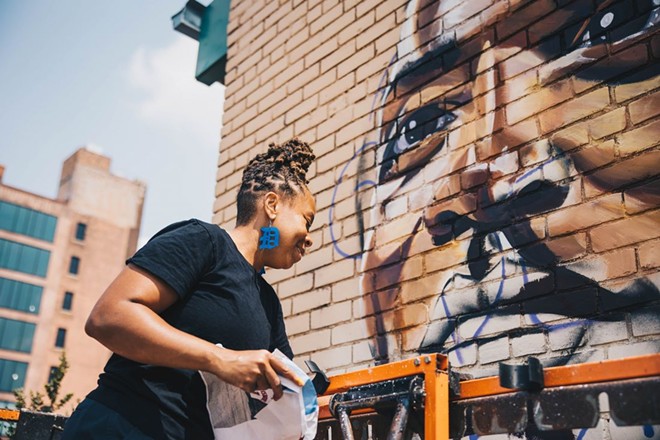 This feature usually highlights a different artist each week, but this time we’re winding down 2022 and thinking of all the exciting projects Detroit artists have brewing for 2023. These are five things we’re stoked to see come to life in Detroit’s arts scene next year. (Got an artist in mind you think deserves the spotlight next time? Hit us up at [email protected].)

Writer and cultural organizer MARS Marshall has a debut poetry chapbook, Flower Boi, on the way in January 2023. The Detroit-born poet’s work investigates reclaiming the Black trans body through desire and longing. We once heard MARS read at a summer backyard party and were struck by their ability to effortlessly weave emotion with humor and imagery that makes the poem live before you. MARS is a 2021 Kresge Literary Arts Fellow, 2019 Lambda Literary Art Emerging Writers Fellow in Poetry, and director of the Allied Media Conference. Their work has been published in Obsidian Literature & Arts for the African Diaspora, Michigan Quarterly Review: The Mixtape, Foglifter Journal, and more. Flower Boi is available for pre-order through Gold Line Press.

Library Street Collective has several things planned for 2023, including the opening of the Shepherd, an art campus centered around a former church; a skatepark designed by Tony Hawk; and a mixed-use building centering artists with disabilities called LANTERN in Detroit’s East Village Neighborhood. But we’re most interested in the unveiling of the adjacent Charles McGee Legacy Park. McGee is one of Detroit’s most prolific and heralded artists, whose work is on display at the Detroit Institute of Arts, Charles H. Wright Museum of African American History, and beyond. After his passing in 2021 at the age of 96, Anthony and JJ Curis of Library Street Collective took over representation of McGee’s estate, and have worked alongside his daughter Lyndsay McGee to continue sharing his work. The Charles McGee Legacy Park will include several sculptural playscapes alongside a retrospective of the late artist’s work that will be on display at the Shepherd. It’s set to open in the spring of 2023.

The Bagley Mobility Hub is one of several structures being developed around Michigan Central Station. It’s really just a shiny new parking structure, but the part that excites us is the three Detroit-based artists who were chosen to display mixed media installations at various locations throughout the hub: Senghor Reid, Patrick Ethen, and Garage Cultural. Reid’s massive installation is wrapped around three water cisterns facing the Southwest Greenway, which should also be opening sometime next year. We caught a glimpse of them during a sneak peek of progress along the Southwest Greenway earlier this winter. The whimsical paintings of water (fittingly) look over the Detroit River. While Reid’s work is already on display, a light installation by Ethen and work by Garage Cultural in collaboration with Detroit-based artist DeMaciiio and Washington D.C.-based MasPaz will be unveiled when the mobility hub eventually opens in 2023.

OK, so we kinda cheated and are giving you a two-for-one deal here, but Sydney James deserves it. James is the girl with the Detroit earring. Not only did she paint the unmistakable mural “Girl with the D Earring,” in the city’s North End neighborhood, but she reps the actual Olde English D earrings popularized by local artist Yoland Nichelle Curry (R.I.P.) pretty much everywhere she goes. James is always putting Black women front and center in her work, painting them in vivid hues in moments of joy, contemplation, and natural beauty. In 2021, James brought us the first BLKOUT Walls mural festival, featuring primarily painters of color. She had big plans to host the groundbreaking festival in Oakland, California, in 2022, but it was canceled due to a lack of sponsorship. Now BLKOUT Walls is set to make a triumphant return to Detroit from Sept.7-17, 2023. Before that, James will grace us with a solo show at the Museum of Contemporary Art Detroit (MOCAD) that opens on April 15. Unsurprisingly, the solo show is called Girl Raised in Detroit.